The Kolkata Knight Riders, the Indian Premier League franchise co-owned by Shah Rukh Khan, has been taken to court for copyright violation by the Indian Performing Rights Society (IPRS) for playing 14 Hindi film songs without permission at the Eden Gardens.

Cricinfo informs us crucially that by the time the matter comes up for hearing next, in July, IPL 2008 will be over, leaving only an academic discussion on the issue.

Justice Sanjib Mukherjee of the Calcutta High Court refused to grant an injunction against the use of the songs, and directed the parties concerned to file affidavits stating their position. Appearing before the judge, Kolkata’s counsels said that the franchise already had permission to play nine of those songs from Super Cassettes, whom they said had the copyright. Kolkata will now have to file their affidavit within two weeks, after which the IPRS will be given a week to submit its reply. The matter will then come up for hearing in July, by which time the inaugural edition of the IPL will be over.

But surely, the line of the day goes to the concluding sentence of this agency report, spotted on the DNA website:

“In the new Twenty-20 format of the gentleman’s game, popular songs are played in a carnival-like atmosphere at the stadia during any break in the game while pom pom girls perform live. “

(Suffice it to say that my neighbours are probably wondering if I’ve just stocked up on laughing gas.) 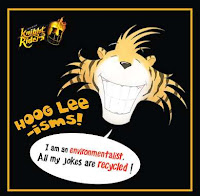 Copyright issues notwithstanding, for those interested, do check out the team’s website, which is by far the fun-nest of all in the IPL. They’re the only ones to have a humour section, which they call the ‘off-side’, with some original comic strips on the game/franchise/etc. I look forward to seeing if they come up with something amusing about this story.

But the best view from the ringside by far comes from Greatbong, who has a cult following in the blogosphere for his sooper-fun takes on the IPL, and his ‘home’ team! Enjoy wilfing!