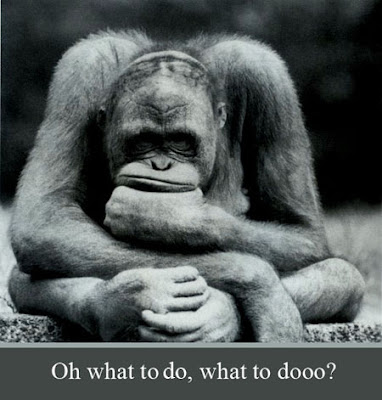 The Business Standard carries a report on a case (J Mitra & Co. v. Asst. Controller of Patents SLP No. 15729 of 2008) that Shamnad had brought to my notice some time back… I’m therefore clubbing my analysis of the case with the report:

The facts of this case are best understood in tabular form (given the number of dates involved). In short however, the facts are as quite simple. J Mitra filed for a patent and after the patent was published, a pre-opposition application was filed by Span Diagnostics. The opposition failed and the patent was eventually granted. Thereafter, Span filed an appeal against the Controller’s decision in the High Court under the original section 116 of the Patents Act (which permitted appeals against the Controller’s decision in a pre-grant opposition to be filed before the High Court). It all seemed quite simple and straightforward until J Mitra challenged Span’s appeal before the HC stating that the appeal “must be dismissed as being misconceived.”

This argument was based on the fact that at the time that the appeal was filed in the HC, the government had passed several amendment to the Patents Act whereby (1) no appeals could be filed against decisions of the Controller in a pre-grant opposition (amendments to the old section 116 and establishment of IPAB) and (2)post-grant opposition could be filed before the Controller (Section 25(2)) and (3) all appeals against the Controller’s decision in post grant opposition had to be filed before the IPAB (section 117A). Unfortunately, although all these amending laws were passed by the Parliament and received the assent of the President, not all of provisions were notified/brought into force.

As ever, the procedural history of the case is not crystal clear in the facts of the SC case. I would imagine however that since J Mitra is the Appellant before the SC, the issue may have reached the Supreme Court following a rejection of the J Mitra’s challenge to the maintainability of the appeal before the HC. (If any of our readers were associated with this case, we would be grateful for any corrections/details regarding the procedural history.)

The issue before the Supreme Court was: Can the suit be maintained before the HC given the fact that at the time it was instituted, the Indian Legislature had already expressed its desire to eliminate appeals in relation to pre-grant opposition proceedings, even though the executive had not notified such intent.

(For those of our readers who are not familiar with legalese, I will explain: When the legislature enacts a law, it often specifies the date on which the law will come into force. Some times, the legislature does not specify the date on which a law (or any part thereof) will come into force. In such instances, the Act comes into force on teh day that it receives Presidential assent. At other times (and in recent years, not unusually), the Legislature stipulated that the Act (or certain sections within it) will come into force on “such date as the appropriate government may, by notification in the official gazette, appoint.” The present case falls within this last category. For all practical purposes, unless an Act “come into force” it may as well not have been passed!)

To better understand J Mitra’s arguments, we can now look at the facts in this neat little table: 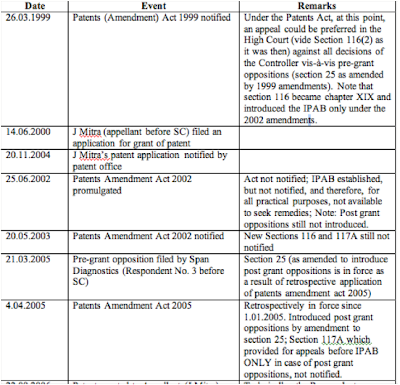 I thought that the case was a pretty straightforward one – unless an amending provision is brought into force, the earlier provision will stand unless there is evidence the the Legislature wanted to terminate the rights/remedies under the earlier section with immediate effect, notwithstanding the coming into force of the new provision. No such evidence was offered in the present case (and there is none that I could dig out…). Therefore, when the case was filed before the HC, the old section 116 was very much still available to J Mitra by virtue of the fact that the amended provision was yet to be notified. Accordingly, the Supreme Court held:

“Taking into account the complexities involved in this case, on account of a hiatus created by reason of the law not being brought into force in time, we are of the view that the first appeals, filed by respondent no.3 in the High Court being FAO No.292/06 and FAO No.293/06, would remain in the High Court. The said appeals would be heard and disposed of by the High Court in accordance with law under Section 116 of the said 1970 Act as it stood on 19.10.06. The High Court will hear and decide the validity of the Order passed by the Controller dated 23.8.06 rejecting “pre-grant opposition” filed by respondent no.3. We are informed that there are hardly one or two matters of this nature which are pending. Therefore, we are of the view that respondent no.3 cannot be let without remedy. In the special circumstances of this case, particularly when after 2.4.07 appeals against orders rejecting “pre-grant opposition” are not maintainable and particularly when FAO No.292/06 and FAO No.293/06 were filed by respondent no.3 prior to 2.4.07 under the old law, we are of the view that these two appeals shall be heard and decided by the High Court in accordance with law. The Appellate Board after 2.4.07 is entitled to hear appeals only arising from orders passed by the Controller under Section 25(4), i.e., in cases of orders passed in “post-grant opposition”. Therefore, there is no point in transferring the pending FAO No.292/06 and FAO No.293/06 to the Appellate Board which has no authority to decide matters concerning “pre-grant opposition”. Moreover, it may be noted that even Section 117G, which refers to transfer of pending proceedings to the Appellate Board, is also brought into force vide Notification dated 3.4.07. Keeping in mind the peculiar nature of the problem in hand, we are of the view that ends of justice would be subserved if the High Court is directed to hear and decide the appeals bearing FAO No.292/06 and FAO No.293/06 in accordance with law as it then stood, i.e., under Section 116 under Patents (Amendment) Act, 1999 against Orders passed by the Controller in “pre-grant opposition” proceedings.”

The case reminds me of my common law class in law school (Bhopal) – in early times, the maxim was “where there is a remedy, there is a right.” However, in modern times, I remember being told (and I hope I will be corrected if I remember incorrectly) that the maxim is “where there is a right, there is a remedy.” In the 2 years before the IPAB was set up and sections 116 and 117A were notified, there seems to have been a situation where there was a right (to file appeals against the decisions of the Controller in the case of post grant oppositions), but no remedy – i.e. no means of exercising that right (between 1.1.2005 and 02.04.2007- i.e. the date on which section 117A was notified).

Now to come to the Business Standard report: An interesting observations by the author states: “If this Catch-22 is avoided, Section 5 of the General Clauses Act will operate. According to it, ‘where any central Act is not expressed to come into operation on a particular day, it shall come into operation on the day on which it receives the assent of the President.’ As it happens, there is not much delay in getting the presidential assent, but the rest is in the hands of the mandarins.”

I am not sure what exactly the author is driving at. But I’m pretty sure that the General Clauses Act will not come into play in the present case. As per the wordings of the general clauses act, it is necessary that the central act not have expressed any particular date on which the Act is to come into force. In the present case, the act states clearly that this specifically is the date on which the central government notifies the act. Often, this kind of discretion may be necessary in order to give the executive time to make necessary structural and infrastructural changes to ensure that what the Act envisages, may be carried out. If this time is not given, there would be a situation for example, where the Act states that the appeal must lie before the IPAB, but in reality, the IPAB is not yet constituted – no one is appointed to sit on the bench, indeed, there may also be no specific “bench” allotted for anyone to sit. In such a case, it would make no sense at all for the Act to come into force as soon as the President gives his assent.

All in all, all branches of the government have a great deal to learn from the case…