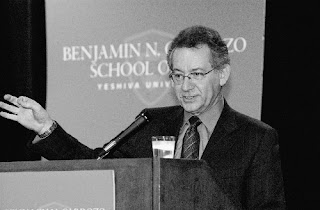 In the last couple of days, I have made many an attempt to key in a few words to express my deep sorrow at the passing away of an IP maverick and a very dear friend and mentor, Sir Hugh Laddie. Unfortunately, as they say, when the heart is heavy, words are but few.

I spent a large part of this evening going back to the email exchanges that I’ve had with him since I’ve known him (for the last 5 years or so now). I couldn’t stop myself from chuckling away at his emails–as his inimitable wit was stamped on almost all of them. It certainly helped, as the heart is a lot lighter now. Let me try to therefore write a few words to celebrate the life of a truly exceptional human being.

Blessed with a towering intellect, a ready wit and the devil’s own charm, Hugh commanded instant awe, admiration and respect in the court, at conferences, social gatherings, classes and every other venue that he chose to grace. More importantly, he had a heart of gold, always ready to help, no matter what the personal cost to him.

I first met Hugh in the summer of 2003 in his capacity as a judge and in my capacity as a student “marshal” (I was finishing the BCL at Oxford then). The Marshal system had just been introduced around that time and offered students like us the rare privilege of sitting on the bench with a judge and watching the proceedings, as they unfolded. Given that I had only known him through his landmark judgments, I was in complete awe. Hugh however put me at ease relatively quickly with his easy going nature and infectious smile.

Sitting with him on the bench and watching his brilliant mind tick away as he grilled counsels in a complicated patent dispute involving the crystallisation of aspartame was one of the most exhilirating experiences in my IP career. He disposed of the matter in near record time — aided in large part by his desire to beat the Dutch to it (there were parallel proceedings before the Dutch courts), as he didn’t want them to think that “the English were slow”! What was intertesting is that during the course of these proceedings, as counsel laboured hard over what they assumed were persuasive arguments, he would pass on hand written chits to me on the bench with statements ranging from “that is an awfully boring argument” to “counsel is attempting to take me for a ride!”

What cemented our relationship in the years to come was Hugh’s love for India. Along with the graceful Stecia (his wife who shared his love for India), he would visit as often as he could. He was part of most GW law delegations to India (the George Washington University (GW) law school, where I taught for a year, ran an “India” project, the objective of which was to build bridges between the US and India in matters relating to IP).

Amongst the various speakers that the GW delegation brought to India (an assortment of IP speakers drawn from industry, academia and government from the US, Erupe and Japan were flown in for this project), Hugh was easily the most well loved by the Indian audience. The fact that while most other speakers extolled the virtues of their domestic regimes and derided the Indian IP system, Hugh was more humble and attempted to understand and appreciate the specific socio-economic and cultural circumstances that drove India’s IP regime, endeared him considerably to the audience.

Hugh used his razor sharp wit to settle most debates during such proceedings. I recall an incident where he was on the same panel with Judge Randall Rader of the US Court of Federal Circuit, another towering intellect, debating the virtues (or otherwise) of the rather tortuous and expensive US litigation process. Judge Rader remarked that perhaps the long and expensive US litigation process might induce more parties to settle matters out of court and that this might be a good thing. Pat came the reply from Hugh: “Randy’s suggestion amounts to arguing that the poor and hungry in Sub Saharan Africa are actually better off than most of us, since they needn’t ever worry about obesity!”

“It is one of the greatest honors of my life to have NEVER won a debate with Sir Hugh Laddie, though I tried many, many times to improve on that record. His sharp intellect always commanded any legal question. The greatest danger, however, was pulling ahead at all in any race to a legal conclusion because then he would turn his compelling sense of humor to his advantage and the contest would be instantly lost.”

Hugh’s wit was not just a sword with which he demolished very formidable opponents, but his shield as well. While exchanging emails with him after he’d been diagnosed with cancer, Hugh, in his inimitable style, writes:

“I can also assure you that this is not getting me down. I feel rather detached from it all at the moment – as if it were happening to someone else. Anyway, after the operation my stomach will be a lot smaller than it is now so the doctors have promised me that I will not be able to eat as much – something I have found impossible to achieve by simple dieting. I am quite looking forward to being slimmer!”

Full of good cheer, courageous and zealously optimistic even in the face of the harshest adversity, Hugh taught me some of the most important lessons in life that I have ever learnt. Consider this email to me, reitering his commitment to jointly author a book on patent law, written as his mind and spirit fought valiantly against the body to quell the physical pain that was building up inside:

“I should make it clear that I consider this to be only a temporary setback. I still want to write the patents book with you.”

A thought leader in every sense of the term, he innovated in almost everything he did, and set new standards at the bar, the bench and in academia. Most importantly perhaps, he never shied away from taking the “road less travelled by”. Apart from his countless judgments that fearlessly struck a different chord than the prevaling wisdom (or folly) of his times, all other aspects of his life bear testimony to his “maverick” nature. Who else would upset the political establishment by being one of the only two judges in the annals of British history to have ever voluntarily resigned? And when asked as to why he resigned, his one line answer was that he found the bench boring! Well that was Hugh for you.

As I mourn the loss of someone who has had a deep influence on my life, and several others, I can only imagine him with that characteristic impish grin exhorting me to stop taking life so seriously. “It’s only a journey”, as he would often say. “One must enjoy the ride and never really worry about the destination”. Yes Hugh, I’ve come to appreciate that it’s just a journey meant to be savoured. But you cannot deny me (and several others that have known you) the sadness of having to traverse it without your sublime friendship.