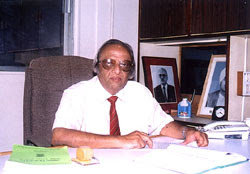 This comes very late in the day, but is a condolence message that had to be written.
Last year, we lost one of India’s leading IP figures, Shri Rajendra A Acharya, who passed away at his residence in Pune on the 18th of July 2010.

Acharya-ji has the distinction of serving as India’s Controller General of Patents for a good 12 years (a term that traversed the ’80’s and the early 90’s). My guess is that this makes him the longest serving Controller General in India.

Post retirement, he continued to remain active in the IP space by serving as a senior attorney and consultant at Bhate & Ponkshe, a Pune based IP firm.

After completing his masters in chemistry, Acharya-ji went on to do law. Not content with a bachelors, he went on to finish a Masters in Comparative Law from the George Washington University, USA. Somewhere along the way, he was elected as a member of the Institution of Chemists as well.

I had the good fortune of being with him on a committee that conceptualised and set the paper for the patent agent exam in March 2010. His wealth of experience contributed significantly to the quality of the paper. I was particularly impressed by his energy and clarity of thought. Despite his age, never once did he complain as we traversed 10 hour marathon sessions each day whilst finalising the patent agent exam paper.

On learning of his death, the George Washington University sent us the below message:

“The George Washington University Law School was saddened to learn of the death of our distinguished alumnus Mr. R.A. Acharya, the former Controller General of Patents, Design and Trademarks, Government of India. Mr. Acharya was awarded the Master of Comparative Law (MCL) degree in 1976 with a focus in Intellectual Property Law.

We were honored to have educated Mr. Acharya in the field of IP Law, which served him well throughout his career. He represented the best of our graduates in terms of commitment to public service and a devotion to professional excellence. Our thoughts and prayers are with his family and friends and also with his fellow lawyers and scientists in India who had the good fortune to have worked with and learn from him.”

Similarly, Prabuddha Ganguly, a leading Indian IP expert (who was also part of the patent exam drafting committee) reminisces as below:

“I have known Acharayaji since 1991 as I stepped into the field of patents from my long standing career as a scientist and technologist.

He was then the Controller General of Patents, Designs and Trademarks. I remember him as a soft spoken gentleman who firmly held the principles of sincerity, hard work and integrety……a set of qualities he has held onto till the last day of his life.

Having also worked with him in several committees during his long standing career, I have had the privilege of interacting closely with him and gaining from his immense maturity and experience. He has always found a way to resolve disputes, promote differences in opinions and facilitate a discussion towards the most acceptable solutions.

We pray that his soul rests in peace. He with his usual silence and spirit will continue to guide the Course of IPR in India.”

Mr NK Anand, founder partner of Anand and Anand and a doyen of Indian IP, remembers him as a very humble Controller, never hesitating to bring tea and water for any guest that walked into his office, without necessarily calling on his office staff for help.

Please join us in commiserating this sad loss for the Indian IP community.