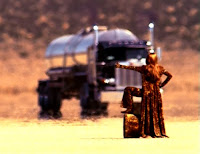 The crocs don’t like it much but they aren’t saying anything. No, it’s not the budget…. Its just that the crocs in Kerala can’t be associated with Steve Irwin says his widow. Though Irwin was famous for his role in wildlife conservation, his wife isn’t too happy about the Kerala Wildlife Department dedicating its crocodile park at Neyyar, Thiruvananthapuram to him. For a brief background, the Kerala Wildlife Department had named their crocodile park ‘Steve Irwin Crocodile Research and Rehabilitation Centre.’ As per news reports, Terri, Irwin’s widow, sent a legal notice to the Wildlife Department warning them against the dedication and resultant violation of intellectual property rights. Post the threat of legal action the park backed out and changed the name of the Rehab centre. The Chief Wildlife Warden, K.P. Ouseph, stated that, “We meant it as a token of our respect for him and his work as a naturalist and conservationist.” So where does the problem arise? The issue falls in the ambit of celebrity rights/personality rights, which came about as an extension of intellectual property rights. The basic understanding of these rights is that an individual (normally a celebrity) has a right over his reputation and information connected to him. Any third party trying to benefit commercially from such reputation or information without due authorization is violating the concerned person’s personality rights. A result of judicial innovation, personality rights are a mix of privacy and publicity rights with economic and moral aspects. In terms of publicity rights, the celebrity has the sole right to commercially use his personality. No third party can do economically benefit from the celebrity’s personality without due authorization (a form of misrepresentation). As far as moral aspects of this publicity right is concerned, unauthorized association with the celebrity which leads to harming the reputation of the celebrity (similar to the conception of loss of goodwill) or results in defamation would also amount to the violation of the celebrity’s rights. Basically, the privacy aspect illegalizes undue interference in the private life of the celebrity. The term ‘right to publicity’ was coined by Justice Frank in the case Haelen Laboratories v. Topps Chewing Gum. In his decision, Justice Frank upheld the right of the baseball player to assign the publicity value of his photograph. This was one of the first cases that recognized the economic interest a celebrity had in his personality. More recently, Julia Roberts took Russell Boyd before the WIPO Arbitration panel for cybersquatting and registering the domain name ‘JuliaRoberts.com’ in bad faith. The WIPO panel accepted that, even in absence of a registered trademark over her name ‘Julia Roberts’ was distinctive and carried a secondary meaning over which only the actress could claim a monopoly. Consequently, the domain name registered by Boyd was in bad faith and an attempt to wrongfully benefit from the celebrity’s fame and status.

(Refer to T. V. Kumari, “Celebrity Rights as a Form of Merchandise – Protection under the Intellectual Property Regime”, 9(2) JIPR 120 – 135) Similarly, in Edmund Irvine Tidswell Limited v. Talksport Limited (2002), the United Kingdom High Court held that a celebrity could have a proprietary interest in his reputation and could protect the same from unlicensed appropriation. This case reflected a change in stance for the UK courts, which have historically been uncomfortable with the idea of image rights. The diversion in the American and European legal frameworks in relation to personality rights is summarized by Daniel Biene. He states that, “… While the United States, the world’s largest producer and exporter of entertainment, recognizes a so-called right of publicity to allow the use of one’s identity as an economic commodity, continental Europe’s legal tradition considers persona and business essentially incompatible.”

(Refer to D. Biene, “Celebrity Culture, Individuality and Right of Publicity as a European Legal Issue”, IIC 2005, 36(5), 505-524.) Note should be taken that the publicity aspect of personality rights aims to protect the economic value of a reputation, in a manner similar to the protection of merchandise. Given this treatment, even though personality rights originated from intellectual property regime and the tort of passing off, presently in the United States the ‘publicity’ aspect of personality rights is dealt with as a measure of unfair competition. As far as the privacy aspect of personality rights is concerned, this right does not allow the celebrities to completely control and censor information regarding them from reaching the public. There are limits to the control celebrities can exercise over information so as to prevent it from entering the public domain. For instance, in Campbell v. Vanessa Frisbee, the US court, citing an earlier decision, stated that those who seek and welcome publicity of every kind bearing upon their private life’s so long as it shows them in a favourable light are in no position to claim invasion of their privacy which shows them in an unfavourable light. Thus, one cannot control all kinds of information using the privacy claim; normally some economic harm or likelihood of the same has to be shown. Hence, in case of privacy rights there is a fine balance that needs to be maintained between personal information and public interest in dissemination of information relating to celebrities. Mostly, this balance is maintained by determining whether the information about to be released or which has been released in relation to the celebrity is ‘newsworthy’, i.e., is there any public interest in the receipt of the information. Public interest is judged using the standard of a reasonable man. The line is drawn where such interest turns into morbid prying into someone’s personal life.

(Refer to T. V. Kumari, “Celebrity Rights as a Form of Merchandise – Protection under the Intellectual Property Regime”, 9(2) JIPR 120 – 135) In India there isn’t any law as such on Personality Rights. However, law on different aspects of personality rights can be located in various legal fields. For instance, in the famous AutoShankar case the Supreme Court recognized that the right to privacy was a part of the fundamental right to life and the State could be held responsible if it violated the same. Moreover, the court also recognized that if the violation was by a private person then the unwarranted interference could be treated as a civil wrong and the right to privacy could be enforced through the law of torts. Second, a defamation suit can be filed against a person who makes or publishes any imputation concerning any person [including a celebrity], knowing or having reason to believe that such imputation will harm, the reputation of such person, is said, to defame that person. Defamation is both a civil wrong and criminal offence in India. However, it should be noted that truth published in public interest is a defense in any action of defamation. This is interesting since judgments cited earlier in this post clearly show that in several cases the courts are of the view that, since celebrities court the media the permissible intrusion levels in their lives should be higher and normally only instances of ‘morbid prying’ are to be prevented. Lastly, a ‘passing-off’ action is available against any third party who causes injury to the business, goodwill or reputation of the plaintiff by misrepresenting and trying to ‘pass-off’ his goods or business as those of the plaintiff. Applying this framework, a passing-off action can be filed against a third party who attempts to create an untrue association between his product and a celebrity by making unauthorized representations that the concerned celebrity endorses the product. The concerned celebrity’s personality and/or goodwill can be treated as a ‘commodity’, and it can be argued that the wrongful association marketed by the defendant in the course of his trade to the consumers has resulted in loss of goodwill and reputation for the celebrity and has adversely affected his ‘brand value’. Moving on, even in the absence of any law or decision on the point, there are instances where celebrities have tried to use the concept to protect their distinctiveness. For instance, prior to the release of his film “Baba” in 2003, Rajnikanth issued a legal notice prohibiting anyone from imitating his screen persona or using the character of “Baba” for commercial gain, including by way of advertisements and imitation by mimics or television. The legal notice was published in a number of leading Tamil and English dailies the legal notice also declared that no attempt be made to use Rajnikath’s photos or sketches or attire in the film such as the red scarves, pendants etc for the purpose of endorsing products. From this a conclusion can be drawn that the actor was attempting to protect his personality rights. (Refer to M. Verghese’s article on personality rights available here) To my knowledge, the only relevant discussion on personality rights took place in the Delhi High Court decision,

ICC (Development) International Ltd v. Arvee Enterprises & Another, 2003 (26) PTC 245 (Del), where it was held that the right of publicity does not extend to events and is confined to persons. The passage of the judgment relevant for us is reproduced below:

“… The right of publicity has evolved from the right of privacy and can inhere only in an individual or in any indicia of an individual’s personality like his name, personality trait, signature, voice, etc. An individual may acquire the right of publicity by virtue of his association with an event, sport, movie, etc. However, that right does not inhere in the event in question, that made the individual famous, nor in the corporation that has brought about the organization of the event. Any effort to take away the right of publicity from the individuals, to the organiser {non-human entity} of the event would be vocative of Articles 19 and 21 of the Constitution of India. No persona can be monopolised. The right of Publicity vests in an individual and he alone is entitled to profit from it. For example if any entity, was to use Kapil Dev or Sachin Tendulkar’s name/persona/indicia in connection with the ‘World Cup’ without their authorisation, they would have a valid and enforceable cause of action….”

One can safely say that if the wording of this judgment is to be followed then the right of publicity and a celebrity’s control over the commercial use of his image under the realm of personality rights is recognized in India.

However, given the hazy state of law in the area, Safir Anand and Surbhi Mehta of Anand and Anand in their article “India: IP and affiliated issues in the sports arena” published by ManagingIP, gave the following tips to celebrities, especially sportspersons, to ensure protection of their legitimate interests:

• Ensuring written consents are signed in every sponsorship, marketing or endorsement situation, where there is clearly a commercial benefit to a third party,

• Making the consents specific with reference to the image, the permitted uses, the medium and the timeframe for use, and

• Expressly excluding in writing any images that are not to be made public or that are not used in certain ways.

Accounting for all this, I am still at a loss and I fail to understand Terri Irwin’s actions. I agree there is association, but it’s from dedication! The same is evident from statements made by concerned authorities and news reports. The attempt is pay respect (fair use?) and not one to make a buck out of wrongful and misleading association or by making claims of having memorabilia of Irwin or that Irwin visited the centre.

For entertainment value I am reproducing Steve Irwin’s plaque which was put up outside the park, also so that one can figure the degree of association.

My problem with this entire situation being that it seems pretty unreasonable to use laws which are meant to serve a completely different purpose to lash out at a well meaning tribute, given the plaque and related reports I fail to see how it could be interpreted as anything else.

Terri hold your horses or your crocs maybe!