SpicyIP is delighted to bring you a guest post from Latha R Nair, a leading IP practitioner in India. Ms Nair, who has written occasionally for the blog, is a partner with one of India’s top IP firms, K&S Partners, based in the Delhi/NCR area. Apart from handling matters relating to protection and enforcement of trademarks and copyrights, she advises clients on TRIPS related issues, protection of geographical indications in India and abroad, domain name disputes and intellectual property aspects of the entertainment industry and the Internet. In particular, she has been advising the Government of India in the protection of various geographical indications including Basmati and Darjeeling. She has also co-authored a seminal work on geographical indications, titled “Geographical Indications – A Search for Identity” published by Lexis Nexis Butterworths India, which is a first work of its kind on the subject. For a detailed profile, do visit an earlier post we have run by Ms Nair.

Today’s post is about the dispute around the GI application filed, and recently abandoned, by Reliance Industries Limited (RIL), which Ms Nair sheds some light on for readers here: 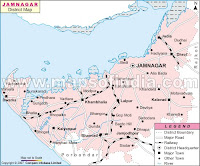 A report in the Mint recently states that Reliance Industries Limited (RIL) has abandoned its applications for registering ‘Jamnagar’ as a geographical indication (GI) for petrol, diesel, LPG etc. The report quotes P H Kurian, Controller of Patents Trademarks and Geographical indications as having stated that the applications were abandoned by the GI Registry for lack of prosecution on the part of RIL, the applicant. It is a relief to know that wisdom has eventually dawned upon RIL. Should we say, it is better late than never?! (Image from here: http://www.mapsofindia.com/maps/gujarat/districts/jamnagar.htm)

A perusal of the statement of case of GI application No. 38 for ‘Jamnagar’ filed by RIL which was advertised in Journal No.12 (download: 1.5 MB) would reveal the various errors in the application that survived acceptance and proceeded unhindered till the stage of advertisement.

To begin with, the applications filed by RIL were contrary to Section 11 (1) of the Geographical Indications of Goods (Registration & Protection) Act, 1999 [ ‘the GI Act’] which states as follows:

“Any association of persons or producers or any organization or authority established by or under any law for the time being in force representing the interest of the producers of the concerned goods, who are desirous of registering a geographical indication in relation to such goods shall apply in writing to the Registrar in such form and in such manner and accompanied by such fees as may be prescribed for the registration of the geographical indication.”

One of the puzzling questions in the Jamnagar applications was, who were these producers whose collective interest RIL was representing through these applications. For example, in the statement of case, against the column “List of association of persons/ Producers”, RIL had entered, “to be provided on request”. However, under the column, “Description of Goods”, RIL stated that it was the largest producer of petrol and that the Jamnagar manufacturing complex was the largest industrial project set up “at a cost of 142.5 billion” (presumably INR)! Did the mighty RIL really need to get a GI registration to boost the sales of its petrol and LPG?

Further, under the column, “Specification” RIL has listed the ISO standards met by its petrol, fuel, LPG and diesel. Under Section 11(2) of the GI Act, an application is to contain a statement as to how the GI serves to designate the goods as originating from the concerned region in respect of specific quality, reputation or other characteristics of which are due exclusively or essentially to the geographical environment with its inherent natural and human factors. Once again, under the column “Uniqueness”, the mention of the compliance with the ISO standards reappears. When one could have thought that this petrol could save all the energy problems of our planet, there is no mention of any unique properties possessed by the goods in the application by RIL except the compliance with ISO standards!

The legal innovation and creativity in the application did not end there. Under the column “Proof of origin [Historical records]” RIL states as follows:

“In 1991, the Government of India allowed the investments from the private sector, in this field. Heavy investment has been made in the less favoured remote area which has resulted in the improvement of local rural area and paved way for the retention of the rural population in this area and it helps in the rural development. The applicant in a record time of 15 days after the historic heavy cyclonic hit on 8th June 1998 repaired the extensive damage and brought back the normalcy”

While RIL certainly deserves more than a pat on the back for the heroic deeds of repairing the damage to the plant (which is, by the way, the private property of RIL) in a fortnight, one fails to see the historical records that are hidden in the said paragraph!

Mercifully, the advertisements in the GI journal led to two oppositions filed by two different opponents. One shudders to imagine how the world IP community would have viewed the Indian GI protection process, if these remained unopposed and proceeded to registration!

From the perspective of an IP practitioner, the fact that these applications were filed by a private entity to further its commercial monopolistic interests raises several concerns for the direction of the GI protection process in India, which is still in the nascent stages. Are we game to register anything that has a geographical name as a GI? At least, the minimum standards stipulated under the GI Act should not be overlooked by all concerned. While augmenting numbers may not be a bad thing, we must not lose sight of the broad objects of protecting a GI, namely, preserving the collective community interests of the producers and protecting consumers from deception. An objective and dispassionate soul searching is warranted to see if we are on the right track while filing applications in respect of anything that sounds like a geographical name to be protected as a GI. Failure to appreciate this could eventually harm and dilute the process of protection of GIs in India leaving the stake holders of the innumerable genuine GI products without an access to realize the economic potential in these products.

[The author is a partner with the Gurgaon based IP law firm K&S Partners. The views are personal.]