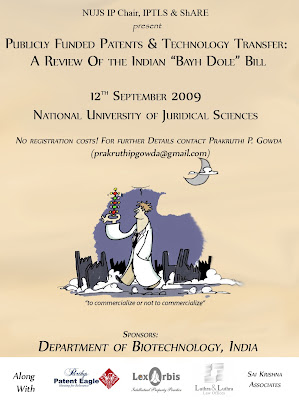 As announced earlier, we have a full day conference on the proposed Indian “Bayh Dole” bill on the 12th of September. The final schedule is listed on the SpicyIP website.

I want to thank Indrajeet Sarcar and Ashish Alexander, two brilliant “designer” students of NUJS for giving us such fabulous art work.

Registration is free–and so is the lunch (challenging the prevailing economic assumption that “there ain’t no such thing as a free lunch”). But if you wish to attend, please try and register before the 7th of September by emailing Prakruthi Gowda at prakruthipgowda[at]gmail.com. Just so that we have some idea of the numbers and can place the appropriate orders for beverages and lunch.

Since the last program, we’ve added a number of interesting panelists at the last session, which promises to be fun.