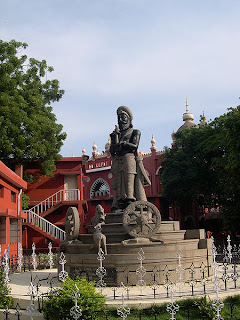 In its recently concluded Winter Session, the lower house of Parliament, the Lok Sabha, passed ‘The Commercial Division of High Courts Bill’, 2009. The Bill which is based on the recommendations of the 188th Report of the Law Commission of India aims at the adjudication of big ticket commercial disputes, Rs. 5 crores or above, within a timespan of one year. The Bill was consequently sent to the Rajya Sabha which has referred the Bill to the Select Committee on Personnel, Public Grievances, Law and Justice. The Select Committee will prepare a report on the Bill which will then be hopefully debated by the Rajya Sabha before the Bill gets passed into law.
Image of a statue on the premises of the Madras High Court. Photo Credit to: G.V. Balasubramanian.
The Law Commission Report can be accessed here.
The proposed Bill can be accessed here.

The 188th Report of the Law Commission of India: The 188th Report prepared in the year 2003 appears to be fuelled by an outrage at a series of U.S. judgments which have characterized the state of the Indian judiciary as ‘deplorable’ and on the verge of ‘collapse’. These U.S. judgments, basing their opinion on affidavits of lawyers and jurists familiar with the Indian legal system, have noted that since Indian Courts can take up to 15 years in adjudicating commercial disputes and that such a remedy was equivalent to no remedy. Proceeding on this assumption these U.S. Courts have assumed jurisdiction to adjudicate commercial disputes even though U.S. Courts would not otherwise have jurisdiction since no cause of action had arisen within the territory of the U.S.A.

The Law Commission while disagreeing with all these U.S. judgments has conceded that there is a pressing need to fast-track high value commercial disputes that have arisen in a post-liberalized and globalized Indian economy. The Law Commission therefore recommended the setting up of dedicated commercial benches within the High Court to adjudicate commercial high value law suits. The Bill introduced in Parliament by the Minister for Law and 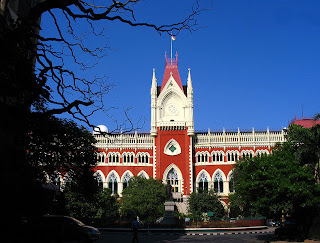 Justice is based primarily on the recommendations of the Law Commission Report.
Image of Calcutta High Court. Photo credit: Avrajyoti Mitra.

The Commercial Division of High Courts Bill, 2009: The Bill proposes to fastrack these disputes by setting up dedicated Division Benches (i.e. two judges) in every High Court to hear ‘commercial disputes’ which are valued at Rs. 5 crores or higher.

The proposed definition of ‘commercial disputes’ covers even IP disputes as is obvious from the following definition in Section 2 of the Bill:

(a) “commercial dispute” means a dispute arising out of ordinary transactions of merchants, bankers and traders such as those relating to enforcement and interpretation of mercantile documents, export or import of merchandise, affreightment, carriage of goods, franchising, distribution and licensing agreements, maintenance and consultancy agreements, mercantile agency and mercantile usage, partnership, technology development in software, hardware, networks, internet, website and intellectual property such as trademark, copyright, patent, design, domain names and brands and such other commercial disputes which the Central Government may notify.

Typically the court assuming original jurisdiction in most commercial disputes are the District Courts. For examples the Patents Act, the Trademarks Act and the Copyirght Act all name the District Court as the court of first instance before which a suit for infringement can be filed. Normally law suits cannot be filed directly before a High Court. A High Court is usually confined to hearing appeals from District Court apart from being the only courts in a State to exercise writ jurisdiction. The only exception to this rule are the High Courts of Bombay, Madras, Calcutta, Delhi and Jammu & Kashmir. The first three were set up by the British in the 19th Century through the Indian High Courts Act, 1861. The Delhi High Court was created as recently as 1966 and is definitely the most dynamic of all these High Courts. These 5 High Courts have Original Jurisdiction i.e. lawsuits of a particular valuation can be filed directly in these High Courts provided that the High Court has the territorial jurisdiction to try these cases. Normally the territorial jurisdiction of these High Courts does not extend beyond the boundaries of the cities in which these Courts are based.

Most IP infringement suits are filed in these High Courts which have original jurisdiction as Indian District Courts are woefully underequipped to adjudicate complex high value commercial disputes. This is not to say that the High Courts, with original jurisdiction, are brimming with resources but there is no arguing that these Courts are definitely better off than the District Courts both in terms of resources and manpower.

By setting up dedicated D

ivision Benches in all 21 High Courts across the country this Bill will bestow Original Jurisdiction on all High Courts making them the epicentre of all commercial litigation in indiviudal states. This makes a lot of sense because most businesses are based out of the capital cities of individual states and High Courts are usually situated in these capital cities.
Image of Bombay High Court. Photo Credit: Nichalp.

The ‘Unbelievable’ Procedural Reforms: Apart from consolidating the forums of high value commercial disputes this Bill brings in absolutely unbelievable reform in the procedural laws of India. Currently the only time limit in the Code of Civil Procedure, 1908, is the 30 days time limit to file the written statement (this is the first pleading filed by the defendant in response to the lawsuit filed by the Plaintiff).

This amendment, which was introduced in 2002, signficantly fast-tracked the process because until this statutory time limit was introduced the normal practice for the Defendants was to delay filing a written statement for upto a year after the suit had been filed. With the 30 days time limit being enforced strictly by judges Defendants actually began to file written statements within the 30 days time limit.

The proposed Commercial Division Bill attempts to replicate this success by introducing time limits for every stage of a lawsuit. The Bill also proposes to consolidate the pleadings. Under the current law the only requirement at the stage of filing the suit is to submit a Plaint with some supporting documents. A plaint is limited to facts and involves no law. It basically lays out the cause of action and the relief that is requested from the Court. As per Section 9(2) of the proposed bill the Plaintiff will have to file the following pleadings and evidence along with the Plaint at the very initial stage of the lawsuit:

(a) the plaintiff shall file along with the plaint,—
(i) the documents on which he sues or relies;
(ii) as many copies of the plaint and documents referred to in this clause as to the number of defendants;
(iii) an affidavit containing his statement in examination-in-chief;
(iv) affidavits containing statements of other witness in examination- inchief;
(v) brief issues that are likely to arise;
(vi) list of interrogatories, if any;
(vii) application for discovery and production of documents, if any, maintaining their relevancy;
(viii) such other material as the plaintiff may consider necessary;
(ix) full address, including e-mail, fax and telephone number of all the claimants and defendants to the extent known to the plaintiff;

The Defendant in turn has to reply within 30 days. Additional evidence may be filed at the time of trial. The cross examination of witnesses on their examination in chief affidavits will be outsourced to a Court Commissioner who may either be a retired judge or a lawyer of some standing. This is one recommendation which will go a long way in fast-tracking commercial disputes because cross examination is the most time consuming component of a trial.

Another significant change introduced by the Bill is the introduction of case management conference presided by one of the Judges of the Commercial Division, to fix schedules, dates along with time limits for oral arguments.

The truly revolutionary provision of the Bill however is Section 9(5) which requires the Commercial Division to pronounce a judgment within 30 days of arguments concluding and the matter being reserved for Orders. This is absolutely revolutionary because Indian judges, even judges of the High Court can take upto one year to pronounce Orders on an application for interim injunction in cases of patent infringement. Such a delay is simply outrageous. Having said that it can expected that there will be significant opposition from the judiciary to imposing this 30 day limit.

The above timelines have been drafted with a view to ensure that judgment is pronounced with a year of the law suit being filed.

Given the fact that most IP disputes do not even reach the stage of evidence in the one year period, this Bill is definitely good news.

If Moily the Law Minister can actually ensure that the Bill is passed by Parliament I see absolutely no difficulty as to why the Indian judiciary cannot meet this one year deadline from the time of filing the law suit.

There are however some reservations that I have in regards this Bill. I’ll cover this in a follow on post in the coming days.