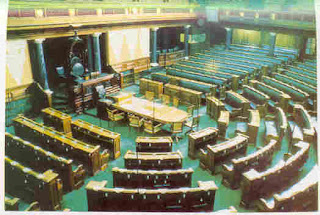 The ET reports that the Lok Sabha, which is the lower house of Parliament, has finally passed the Trademark (Amendment) Bill 2009, on Friday the 18th of December, 2009. Keeping in line with the parliamentary practice of the last few years, the Lok Sabha passed this bill along with 5 other bills in a period of 5 minutes without any debate or discussion, after which it was adjourned sine die.

The bill will now be sent to the upper house of Parliament – the Rajya Sabha – which should hopefully have a more insightful debate on the proposed amendments. Once it is passed by the Rajya Sabha the bill become an Act of Parliament which will come into force only when the Central Government notifies the same.
The Trademark (Amendment) Bill, 2009 was originally introduced into Parliament as the Trademark (Amendment) Bill, 2007. The 2007 bill lapsed because of which it had to be re-introduced in July this year. As already discussed in the insightful guest post by Ankit Prakash the Amendment Bill aims to simplify the trademark registeration process by enforcing the Madrid Protocol.