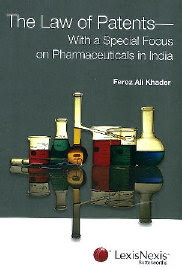 It gives me great pleasure to bring our readers a thought provoking piece by one of India’s legal IP practitioners’ – Feroz Ali Khader. Feroz Ali is an advocate practising at the Madras High Court and the founder of Ali Associates, a law firm which specialises in law and technology practice. He is the author of India’s first legal work on patent laws and pharmaceuticals titled “The Law of Patents – With a Special Focus on Pharmaceuticals in India”, published by LexisNexis Butterworths India, 2007 (hardback, paperback Student’s edition published in 2009). He authored “The Touchstone Effect: The Impact of Pre-grant Opposition on Patents”, published by LexisNexis Butterworths in 2008, a book which guides companies to have a strategy on pre-grant opposition. He is an alumnus of Trinity College, University of Cambridge, United Kingdom and National Law School of India University, Bangalore, India. He is a frequent speaker and a published writer. He is presently based in Chennai.

Of all those who are likely to challenge the validity of the public notice dated 24th December, 2009 issued by the Controller-General of Patents, requiring periodic working statements on patents, I would expect Acacia Research to be in the forefront. I am making a big assumption here about Acacia’s interests in India (Disclosure: My interest in Acacia is purely botanical). For the record, Acacia holds many patents that are not worked. Yet as a business, Acacia works. It’s main source of revenue, by a business-model proved and tested over the last 18 years, comes from filing patent lawsuits–337 of them so far and still counting– and expecting settlements from infringers who actually ‘work’ (Patentspeak: infringe) the invention for which Acacia holds a patent. In early February this year, Acacia was awarded $12.4 million in a patent infringement case against Yahoo!

Some may call this lethargic-cum-exploitative behaviour trollish. In a milder version of patentspeak, those who don’t work their patents are called Non-Practicing Entities (NPEs). NPEs are entities that do not have the capabilities to design, manufacture, and distribute products that have features protected by patents. The Dual-SIM card case, elaborately covered in this blog, was one such Indian case involving an NPE.

NPEs are most-affected by the Controller’s public notice as they will now have to submit working statements by 31st March, 2010. The Public Notice requires all the patentees to furnish information in Form No.27 on working of patents prescribed under section 146 of the Patents Act read with rule 131 of the Patents Rules 2003. While the effort of the Patent Office to require information on the working of patents is laudable, and can take care of some issues involving NPEs, it does create difficulties for entities who propose to practice their patents (PPEs – Propose to Practice Entities). A PPE is an entity which is not able to fully commercialise their invention for financial, regulatory, and business reasons. PPEs defy classification. It could be a heavy-weight Pharma or your neighbourhood garage inventor.

PPEs may have their own reasons for challenging the public notice in a court of law.

Here are some interesting questions a PPE can raise, which do not meet the eye at first glance (they didn’t meet mine, anyway).

2. Is the requirement of working relevant only from the view point of compulsory licences?
You can do a ‘control+F’ for ‘working’ in the Indian Patents Act, 1970. Barring a couple of instances on how (prior) working can kill novelty, your search results will bring you back, time and again, to the chapter on compulsory licensing. All the hits on post-grant working are from Chapter XVI. Of course, there is section 146, the subject matter of deliberation here. That’s how relevant post-grant working is under the Indian Patents Act.
The requirement of furnishing a statement with regard to working of patented inventions on a commercial scale in India is mandated under the Patents Act, 1970 only in the context of compulsory licences (CL). The need to apply for a CL arises only after 3 years after the grant of a patent. So, leave the inventor alone at least for the first three years.
Should the interested person who applies for the CL have knowledge about the working of the patent? If yes, there could be some justification in the Controller calling for this information and publishing the same. The answer is ‘No’. All the applicant for a CL is required to make is an allegation [See section 84(2)] that the patented invention is not worked in India.
Does Form 27 give comprehensive information on the granting CLs? No again. Form 27 does not help the two other grounds in section 84(1)(a) and (b) under which CL can be granted.
I have heard some wonderful stories on the Chapter on Compulsory Licences. The best anecdote involves the first and probably the only Compulsory Licence that was granted by the Patent Office only to be stayed by the vigilant patentee who moved the court on the same day. Going by this account, we in India have had a CL in force only for few hours.

3. If working information is required only in the context of compulsory licences, which may or may not come through, then why mandate periodic statements for all the patentees?
That’s precisely my point. The scale of cost, time and resources involved in filing regular worksheets to the Patent Office is one thing which should be avoided. You can well imagine the Patent Office starting a new database containing working information about all the patents that are renewed regularly in the hope that someone someday will file a CL for working the same in India on a commercial scale.

4. If not Form 27, how will the public know about the working of a patent then?
Section 146(1) allows the Controller to call for any information as opposed to limited information that a patentee will file under Form 27. Under section 84(2), all that is required for the applicant of a CL to make is an ‘allegation’ of non-working. An interested person (the ones who can apply for a CL – not the general public) can be expected to have a fair knowledge about the grant and the working of the patents in which he is interested.

5. What about the abuse that can flow from filing Form 27 by a patentee who proposes to work his invention?
Notice that there is no ‘propose to work’ box in Form 27 to be ticked. Even if the PPE needs time to work her invention, she will have to tick ‘Not worked’. If the activities of PPE, who let us assume has invented something of substantial value but also needs substantial funds to bring the same into the market, are followed by some persons who are interested in busting the patent all they need to do is file a CL under section 84 after 3 years stating that the patent is not worked. When the CL is granted, another person (who could be the proxy of the one filing the application for CL) can wait for another two years and file for revocation under section 85. Our PPE will helplessly witness the patent revoked for not working right before her eyes. This may be a worst case scenario, but it is a probable one under the present scheme of things.
As patents are applied for at an early stage in the life of an invention, inventors will require time to further develop and commercialise their inventions. For the sake of innovation, they should be left alone.

I would propose that the Controller does not take any action, like the threatening action under section 122 (which finds mention in the public notice) in case patentees do not comply with the public notice. The Controller is anyway vested with wider powers under section 146(1) which he can discretionarily use on a case to case basis, rather than mandatorily warrant some stray information on working under section 146(2). Section 146(2) may also inflict a culture of lying or speaking the crooked truth, which can merit a separate post, on which I am …, eh, propose to work.