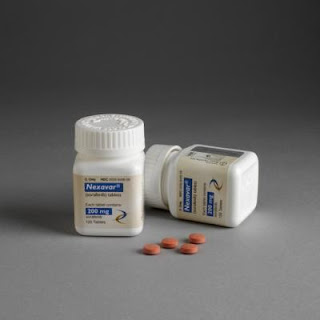 Bayer Corporation has recently launched Round II in its ‘epic’ battle against Cipla over the manufacture and sale of its patented drug ‘Nexavar’ (sorafenib), which has been approved to treat kidney and liver cancer. The Bayer has claimed that by launching a generic version of the drug, Cipla has infringed on its Indian patent no. 215758. Unfortunately the IPIRS system on the Patent Office website has failed to display any information on this patent.
The first hearing of the present patent infringement suit was on the 22nd of March, 2010 before the High Court of Delhi. On this date summons were issued to Cipla and the next date of hearing was fixed on the 23rd of April, 2010. It is not clear whether the Court will hear arguments on the interim injunction application on this date.
In my previous avatar as a practicing lawyer before the Delhi High Court I witnessed that interim injunction applications can take upto 12-16 months to be decided.

Round I of the litigation: Round I of the Bayer-Cipla litigation was initiated in 2008 when Bayer filed a writ before the Delhi High Court requesting directions to the Drug Controller General of India to deny Cipla’s request for marketing approval to launch a generic version of Bayer’s patented drug – ‘Nexavar’. That round of litigation ended in a disaster with Bayer losing spectacularly before both the Single Judge and the Division Bench of the Delhi High Court. Currently an appeal (No. 6540/2010) against the Order of the Division Bench of the Delhi High Court is pending before the Supreme Court of India and is listed for final arguments and disposal on the 3rd of August, 2010. We had blogged extensively on this topic earlier over here and here.

I. The main ‘Players’ in the Courtroom
Bayer’s present suit is one that guarantees to stand out in terms of quality arguments especially since the lawyers and the judge involved in its adjudication have more than adequate experience in pharmaceutical patents.

A. The Judge – Justice Ravinder Bhat – Justice Bhat, whose IP related judgments have been covered extensively on this blog is the only judge in India to have decided and disposed an application for an interim injunction application, in a case (Roche v. Cipla) of infringement of a pharmaceutical patent, after having heard both parties in a record time of two weeks. We’ve blogged extensively about his famous order over here. The judgment was decidedly controversial since it held that a preliminary injunction can be denied on the grounds of ‘public interest’ even if the patent was valid.

The significance of Justice Bhat adjudicating this case is two-fold:

1. Justice Bhat was the Judge who had ruled against Bayer in the writ petition that had been filed in the first round of the Bayer-Cipla litigation. Not only did Justice Bhat disagree with Bayer, in a well reasoned judgment, he also proceeded to impose costs of Rs. 6,75,000 – a new record for the Delhi High Court – on Bayer for engaging in a ‘speculative foray’! At that time Justice Bhat was sitting as a Judge of the writ court, presently however he is sitting as a Judge of the Court exercising original jurisdiction over civil disputes.

It would be especially interesting to observe how Justice Bhat would seek to justify the ‘public interest’ argument in the Roche v. Cipla case in light of his outright criticism of Bayer’s “attempt to “tweak” public policies through court mandated regimes”. If one were to go by a pedantic interpretation of the Patents Act, ‘public interest’ lies solely within the purview of the Executive and not the Judiciary. This is what the Legislature has mandated in the form of ‘compulsory licensing’ provisions. In the Roche-Cipla case however Cipla managed to successfully subvert the statutory framework by tweaking public policies through a court mandated regime.

2. Justice Bhat is one of those rare judges who can hear and decide even a complex patent case in record time. He also happens to be one of the most prolific judgments writers. A search of the Delhi High Court’s website will show that Justice Bhat has delivered atleast 194 orders and judgments in the year 2009. This does not include the hundreds of other daily orders. This means that if Bayer and Cipla were to co-operate and avoid adjournments, then in that case we can probably see an Order from Justice Bhat in a period of 30 to 60 days from the day Orders are reserved for judgment.

B. The Plaintiff’s Counsel – Senior Advocate Shanti Bhushan: Bayer’s legal team is spearheaded by Senior Advocate Shanti Bhushan who is being briefed by one of India’s largest IP law firms – Remfry and Sagar. Mr. Shanti Bhushan is one of the rare Senior Advocates who has had extensive experience in pharmaceutical patents matters, especially those related with Section 3(d) since he was the counsel who argued the complex ‘Glivec’ appeal, for Novartis, before the Intellectual Property Appellate Board (IPAB) and it can be presumed that he had more than an adequate handle over the finer nuances of pharmaceutical patents.

C. The Defendant’s Counsel – Ms. Prathiba Singh: Cipla’s legal team as of now is spearheaded by Ms. Prathiba Singh. She has successfully represented Cipla in its previous battles against Bayer, Roche etc. As of today she is the definitely the leading defence counsel in pharmaceutical patent litigation in India. It remains to be seen as to whether Cipla will employ the services of a Senior Advocate to lead the arguments before Justice Bhat. It is interesting to note that in Round I of the litigation i.e. the writ petition, Cipla had engaged the services of Senior Advocate Dr. A.M.Singhvi who is also the spokesperson for the ruling Congress Party. Dr. Singhvi had formerly led arguments for Roche in its initial battles against Cipla. Considering that similar issues of ‘public interest’ etc. are bound to arise even in this round of litigation it would be interesting to see Dr. Singhvi taking a diametrically opposite stand.

II. The issues that may arise in the present round of litigation: On the basis of the Orders of the Division Bench and the Single Judge in the Roche v. Cipla litigation it is possible to predict some of the issues that are most likely to crop up in the present litigation (of course if anybody had a copy of the pleadings I’m sure we could present a much better analysis of the critical issues):

(i) Ownership & licensing of Bayer’s patent: From the judgment of the Appeal Courts in Round I of the litigation it appears that Bayer’s patent has been licensed several times amongst its group of companies, once in 2003 & 2007. While prima facie this may not appear to be an issue, it remains to be seen whether Bayer has complied with the terms and paperwork required by Sections 68 and 69 of the Patents Act i.e. whether or not these assignments have been recorded in the register of patents.

(ii)Section 8 issues: Bayer should hopefully be able to ward off any Section 8 challenge, especially in light of the Chemtura Corporation judgment by Justice Murlidhar which stated that if in case the Patentees has failed to provide the Indian Patent Office with the search reports and office action reports of major foreign patent offices like the USPTO, JPO and EPO then in that case no interim injunction will be granted since the Plaintiffs have suppressed information from the Patent Office. We have previously blogged on this judgment over here.

(iii)Prima facie Infringement: In light of the observations of the Division Bench judgment in the case of Roche v. Cipla it is absolutely necessary for Bayer to go out on a limb and clarify the massive confusion caused by the judgment. Please do read Shamnad’s earlier post on this judgment in order to understand the underlying issue and the need for engaging in meaningful claim construction. To put it briefly Bayer needs to make it clear that patent infringement suits are decided by comparing the Defendant’s product with the claims in the Plaintiff’s patent. Patent infringement suits cannot be decided by comparing the Defendant’s product with the Plaintiff’s product!

(iv)The ‘Polymorph’ issue: While I have absolutely no idea as to whether Cipla’s allegedly infringing product is actually a polymorphic version of a base salt, it would be in Bayer’s interest to be well prepared for such an argument. It needs to be made crystal clear to the Court that a polymorphic form of a base salt will automatically infringe the patent for the base salt irrespective of whether or not that patent has specifically claimed the polymorphic form. To give a very, very crude analogy: if my patent claim covered only sodium chloride (NaCl i.e. common salt) it doesn’t matter whether they manufacture the NaCL in the form of a brick or a cuboid or a crystal or a star. At the end of the day regardless of the shape they are manufacturing NaCl which is covered by my patent claim and hence they are infringing my patent. A polymorphic version is basically a different form of the same salt i.e. the building blocks are the same, only the structure is different. Once you have a patent over the building block, nobody can build a structure without taking your permission for manufacturing the building blocks.

(vi) Public interest: The biggest issue in this litigation is obviously going to be the pricing factor. Cipla claims to be selling its drug at one tenth the price of Bayer’s drug. That’s a massive price difference but it must be remembered that the generic manufacturer does not have to account for the costs of research and clinical trials. It is pertinent to point out that the National Institute for Health and Clinical Excellence (NICE) turned down Bayer’s drug for the National Health System (NHS) in the United Kingdom on the grounds that the drug was too expensive especially since it increased a patient’s life for a mere 6 months. The cost was held to be not proportional to the benefits of the drug. This decision was obviously slammed by public health organizations in the U.K. There are however more fundamental reasons to disagree with the public interest argument which I will cover in another post.

(vii)Pending post-grant opposition: According to this news report by Jyoti Dutta, Cipla has a post-grant opposition pending against Bayer’s patent, in which case it remains to be seen whether Cipla would file even a counter-claim for revocation before the Delhi High Court. This would result in two similar actions pending against the same patent in two different forums. The fact that the legislation has been drafted in such a way to permit this situation to happens speaks greatly of the absolute tragedy of the last set of amendments to the Patent Act, 1970.

Conclusion: That’s all for now folks. We’ll keep you updated on any further information that we receive on this case.