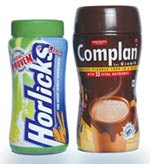 In a recent judgment Justice Ravindra Bhat of the Delhi High Court has passed interim orders in longstanding litigation between Glaxo Smithkline & Horlicks on one hand and Heinz, the manufacturers of Complan, on the other hand. This particular ad-war took a rather ugly turn with the competitors calling each others product ‘cheap’. Hopefully Justice Bhat’s lucid order should clarify the law to the advertising community and prevent the needless recurrence of such long-winded, expensive litigation which seems to be a regular feature between these two competitors. All three suits pertain to commercial disparagement. Justice Bhat has very clearly ruled in favour of Horlicks since the ad-campaign against them was clearly disparaging and also ordered Complan to pay Horlicks costs of Rs. 2.2 Lakhs only. The judgement can be accessed over here.

First Suit – 2577 of 2008 (Glaxo v. Heinz)
The first suit pertains to two advertisements by Complan (Heinz). In the first advertisement the ‘Complan Mummy’ tells the Horlicks Mom that she’s compromising her child’s health by buying a product made of cheap ingredients and that her (fat) child would not grow as fast as a child who was fed Horlicks. The Complan mother then picks out a Complan packet and explains how it has 23 vital ingredients which would ensure fast growth of a child. The ad then shows the Horlick’s mother visibly pushing away a package bearing the Horlicks trademark explaining how she had been misled and how she would no longer repeat the same mistake again. Unfortunately the ad does not seem to be available on You Tube.

In the second advertisement by 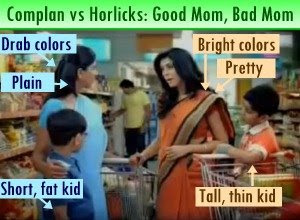 Complan, a Horlicks mom asks the Complan Mummy how her son was so tall and strong. The Complan mother then expounds on the virtues of Horlicks after which she asks the Horlicks mother: “have you ever read the label of cheap Horlicks?”. This is followed by the Complan mom explaining to the Horlicks mom that Horlicks is made of cheap products and ingredients which means less nourishment & protein. The ad ends with a voiceover praising Complan. I think I’ve found the Tamil version of the advert over here. The image from this ad has been taken from Aspi’s Drift which also carries this very interesting article on hidden codes in Indian ads.

Second Suit – 2646 of 2008 (Horlicks v. Heinz)
The second suit pertains to a print advertisement in leading Delhi newspapers comparing the ingredients of Complan and Horlicks with specific emphasis on the fact that some of the ingredients in Horlicks are ‘cheap’ and how a Child’s growth would be compromised by consuming Horlicks. The advertisement also draws attention to a scientific report by the National Institute of Nutrition which substantiates the fact that Complan has good ingredients etc.

Third Suit – 547 of 2010 (Heinz v. Glaxo)
This suit which was transferred from the Bombay High Court to the Delhi High Court was filed by Complan (Heinz) against Horlicks. This 30 seconds advertisement placed both the products i.e. Complan & Horlicks next to each other, compares the prices and according to Heinz, passes disparaging comments against the quality and nutritional value of Complan when compared to Horlicks.

Judgment: The law in regards commercial disparagement is crystal clear i.e. a trader can puff up his goods in comparison to his competitors goods but he cannot denigrate or disparage the competitor’s goods while doing so. Therefore while it may be permissible to state that Product A is better than Product B it is not permissible to state that Product B is worse than Product A. There is a plethora of Indian case-law laying down the criteria for ‘puffing’.

In his order, Justice Bhat finds the two advertisements in the first suits as disparaging and beyond the realm of permissible puffing. The primary reason for this is that the repeated use of the word ‘cheap’ & ‘compromise’ along with the remaining insinuations would definitely harm the reputation of Horlicks. The advertisements in the second suit were held to be in the realm of puffing as they seem to be based on some scientific report, the validity of which could be established only during trial. The advertisements in the third suit were held to be in the realm of puffing. Justice Bhat did not agree with Complan’s allegation that the manner of comparison between both products disparaged its own product and held the same to be fair.