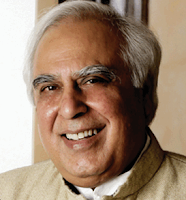 Two Bills – on amendments to the copyright law, and the commercial division of High Courts – were taken up in the Rajya Sabha as expected today. But neither of them saw any closure.
The Rajya Sabha’s discussion on the Copyright (Amendment) Bill, 2010 was interrupted as soon as it began. Instead, the brief discussion pivoted around the possible “conflict of interest” of the concerned Minister of Human Resource Development, Mr Kapil Sibal (pictured here). This question was raised because Mr Sibal’s son – Amit Sibal – represents the music company T-Series (Super Cassettes Industries Limited), which is a major stakeholder in the copyright industry in India (see, for example, here).

Similarly, the parliament also did not conclude its discussion on the Commercial Division of High Courts Bill, 2010. It was objected on grounds that the law was “misconceived” and “badly drafted” (this debate was longer and warrants a detailed separate post, which I shall follow up with in due course).

I could not, of course, catch Rajya Sabha TV live to follow the actual course of events. But today’s “uncorrected debates” made available on the Rajya Sabha website this evening (which you can read here) show that the House began discussion on the Copyright (Amendment) Bill, 2010 towards the end of the day. As speculated in an earlier post here, there was very little time to debate the Bill in any substantive way. As soon as the Deputy Chairman of the Rajya Sabha took up the Bill in the house, a few parliamentarians, notably Mr M V Mysura Reddy, raised a ‘Point of Order’. (A Point of Order is an issue raised in the course of parliamentary debate whenever it appears that a rule may have been broken. Usually, the issue has to be resolved before parliament may continue).

Mr Reddy objected to Mr Sibal’s tabling of the Bill on grounds of Rule 294(1) – relating to a “Declaration of Interest” – of the Parliament’s Ethics Committee Report, which states that any member has to declare his interests in a matter being considered:

“whenever a Member has a personal or specific pecuniary interest, direct or indirect, in a matter being considered by the Council or a Committee thereof, he shall declare the nature of such interest notwithstanding any registration of his interests in the Register, and shall not participate in any debate taking place in the Council or its Committees before making such a declaration.”

Mr Reddy went on to make specific reference to the proposed amendment Section 31D related to statutory licences for radio broadcasting of literary and musical works and sound recordings (you can read the draft bill here), and the ongoing dispute between broadcasters and music companies, notably T-Series. We blogged on this issue here and here.

Minister Sibal, as most of us well know, belongs to a family of lawyers, and has two sons, both of whom practice in Delhi. It will be interesting to see how he handles this tomorrow, if he is called to defend himself, and how the debate pans out. The debate, of course, continues tomorrow in the Rajya Sabha. Those of you with the luxury of time and resources to follow the proceedings, do keep an eye out.