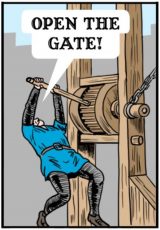 Image with the text ‘open the gate’ (Image from here)

As is well known now, the Parliamentary Standing Committee on Commerce tabled its Report on the IPR regime in India last week. In about 150 pages the Report suggests a major reevaluation of the IP framework in the country. In an approach that seems to focus on the bigger picture while suggesting fairly pointed reforms, the Report misses both the trees and the forest. Some of the conspicuous issues with the Report have been covered by Dr. Scaria (here), Praharsh (here), and Adyasha (here).

The Report focuses on reviewing the working of the Patents Act since its 2005 amendment that brought the Indian legislation in compliance with the TRIPS Agreement. A significant portion of the Report is dedicated to suggesting changes to the Patents Act, albeit without much justification on why these changes are needed. The singular focus of these recommendations is on increasing patent filing in the country. These recommendations aim to water down several substantial restrictions in the Act to increase the scope of patentability and also reduce procedural restrictions to induce some flexibility. In this 2-part post, in part I, I will be analyzing the suggested amendments to Section 3 of the Patents Act (the substantial provisions) and part II will cover the suggested amendments to some of the procedural provisions of the Act.

Diluting Section 3: Doors Open to All?

Section 3 of the Patents Act creates a list of restrictions on what inventions are not patentable. For any invention to be patentable, there are two requirements – first, it should have a patentable subject matter and second, it should pass the threshold of novelty, non-obviousness, and be capable of industrial application. The Section 3 restrictions define what subject matters are not patentable. These restrictions cumulatively give consideration to morality, the element of human effort, restricting ideas from being patented, and accessibility to public health /essential technologies.

The Report suggests loosening some of the restrictions on what a patentable subject matter is. It suggests a revision of ‘Inventions not patentable’ under Section 3(b), 3(c), and 3(j) –

The intent behind proposing these recommendations is evident from the theme of the entire Report – to increase patent filing in India. The Report makes a direct association between increased patent filing and increased Foreign Direct Investment (FDI). The push for opening the realm of patent protection to inventions that were previously expressly prohibited does not seem to be a deliberate policy choice that is grounded in identifying why removing certain patent exceptions would be beneficial for innovation or society but rather is merely focused on increasing patent filing in the country.

While it is a good move for the Report to recognize the possibility of arbitrary exercise of powers by the Controller under Section 3(b)’s widely worded exception, a legislative change to the provision to introduce safeguards would create inflexibilities in the decision-making process of the Controller. The Report does not provide any evidence of arbitrary exercise of powers. While there is obviously a lot of scope for the same given how widely worded the provision is, the only examples provided in the Report are of nicotine chewing gums and smoking devices that make smoking less hazardous being denied patents under 3(b). Other examples I could find of patents being denied due to public order or morality concerns include a numbering system for banknotes, a vibrator, a medicine made of skeletal remains, and a method for determining pancreas’ suitability for islet isolation. The Manual of Patent Office Practice and Procedure, 2019 provides examples of inventions that go against public order or morality – devices to commit theft/burglary, gambling devices, inventions that go against norms of morality, inventions whose purposed use would disturb public order (ex: a house-breaking device).

Public order and morality are both evolving ideas, inducing a legislative safeguard to limit the scope of this would be setting in stone what needs to be written in sand. Soft policies and guidelines, that are periodically reviewed, to encourage a case-to-case evaluation of the exception would be more effective in achieving the purpose of having a more conscientious deliberation on what inventions may go against public order and morality rather than hard law.

Similarly, there is no elaboration on the rationale or the impetus behind suggesting a change in Section 3(c). Discoveries by their virtue lack an inventive step. Discoveries make known objects and their uses that are already existent, and this may be deliberate or purely accidental. Whereas the implication of granting patents to inventions has been focused on incentivizing deliberate human effort that goes with the action of invention. Reviewing this provision to include patenting discovery of non-living substances tips the fine balance that currently exists in the patent regime and over-extends monopoly rights.

Section 3(j) was introduced through the 2002 amendment to the Patents Act to meet India’s TRIPS obligation under Article 27 [Patentable Subject Matter]. Article 27.3(b) imposes a restriction on patenting plants and animals. The Indian legislation in its amendment further extended this exclusion by saying ‘plants and animals in whole or any part thereof’ and also added seeds to the list. India was in favor of prohibiting patenting all lifeforms because of the ethical question involved in extending private ownership over lifeforms and the question of the appropriateness of IPR in recognizing informal systems of knowledge. It is unclear from the Report as to why the Parliamentary Committee believes that presently these two issues are not a matter for deliberation in suggesting this amendment. This aside, while removing seeds from the list of exclusions would not be a TRIPS violation, removing plants definitely would be.

In developing countries, a robust system of patent law is expected to not only act as an incentive for innovation but is also expected to ensure that monopolies granted through such a system do not defeat their purpose of fostering potential growth by limiting accessibility. For instance, as has been argued here by Prof. Shamnad, patent eligibility exclusions have a very significant role to play in India’s policies towards enhancing access to public health. The Committee in suggesting limitations to the list of exclusions under 3(b), 3(c) and 3(j) may expect that it could lead to a spur in innovation, but it completely ignores the consequences of increasing monopoly rights. Large plant-seeds/fertilizer MNCs are more likely to benefit from removing restrictions on patenting of plants and seeds and also having a narrow public order/morality exclusion (the Patent Examination Manual too wholly excludes pesticides from this 3(b) exclusion) than this having a favorable impact on the agricultural sector.

Given the range of inventions affected by these provisions, it is definitely worthy of being reviewed by a Parliamentary Committee. However, the said Committee has completely missed the opportunity to empirically analyze its impact. It is unclear where these suggestions stem from. For instance, if the Committee has taken note of arbitrary use of power under 3(b), it could have made a forceful case for amendments to this section by elaborating further on how and what ‘socially useful inventions’ are being denied patents. Without evidence, the suggestions’ validity stands on weak legs because this seriously limits (barely begins) the discussion on the nature of amendments to be brought to these sections. The efforts seem to be directed at lowering patentability norms rather than an empirical approach to improving the patent regime in the country.

In Part II of this post, I will be covering the suggested amendments to the procedural aspects of the Patents Act.