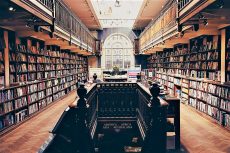 A library (image from here)

As most readers must be aware by now, the Parliamentary Standing Committee Report on India’s IP regime has revealed a problematic, maximalist approach to IP protection, showing no more than a tokenistic appreciation of public interest considerations. Some of the glaring issues with the Report have been highlighted by Prof Scaria (here) and Praharsh (here). In the 6 odd pages devoted to the reform of the Copyright regime, a grand total of 5 statutory issues have been highlighted despite the fact that the last Copyright Amendment is nearly a decade old and comments for a new amendment had been sought fairly recently (see here, here, and here). In this post, I will be analysing the recommendations relating to copyright exceptions and the other reforms suggested.

The Copyright section of the Report opens by stating that the ‘widely-scoped’ exceptions to infringement under Section 52 pose a ‘detrimental impact on the publishing industry and authors’. It goes on to discuss the landmark decision in University of Oxford v. Rameshwari Photocopy, better known as the DU Photocopy case where the Delhi High Court adopted a wide interpretation of the educational use exception in Section 52(1)(i) with regard to making of course packs for students. Shockingly, the Report goes on to hint that “corrective measures” are underway in the form of restrictive amendments to Section 52(1)!

The Report’s recommendations boil down to:

[There is also a typographical error in page 66, suggesting amendments to ‘Section 51(1)’. Section 51 deals with infringement, not exceptions, and Sub-section 51(1) does not even exist – showing how carelessly the Report has been drafted and edited.]

At first glance, the wording of the first recommendation doesn’t make sense, as photocopying of educational material in government institutions is already covered by the exceptions in Section 52(1). The other interpretation is that the Committee recommends restricting all photocopying permissible under Section 52(1) to government-owned institutions, with a cap of 10% of each work. This significantly narrows the scope of Section 52(1)(i) as propounded in the progressive, forward-looking judgment of DU Photocopy.

Firstly, education, which is not only a copyright exception but a fundamental right under Article 21A, is imparted outside of government-owned institutions as well. According to the AISHE Report 2019-20, 66.3% of all college students in India attend private institutions. Historically, the exceptions for teaching, education and research have never been qualified by the nature of ownership of the institution where the use of the work is carried out. The Report does not establish any linkage between the two, leaving unclear why students from private institutions should be deprived of copyright exceptions.

Secondly, imposing a straightjacket 10% limit is patently absurd as DU Photocopy had explicitly upheld the reasonable-nexus approach to determine permissible amount of copying (previously suggested by Prof Basheer): ‘utilization of the copyrighted work would be a fair use to the extent justified for purpose of education’ (para 33, Div. Bench decision). To put things in perspective, even the most IP-friendly jurisdiction of US in Cambridge v. Becker has held 10% copying to be fair use in most cases, on top of the flexible ‘Amount & substantiality’ factor test in its fair use doctrine. In comparison, the socioeconomic conditions in India demand a more nuanced approach like that of DU Photocopy.

Thirdly, tightening of Section 52(1) implies changes in the fair dealing exceptions under Section 52(1)(a), which allows uses for research and private study among others. Fair dealing is already subjected to an inherent ‘fairness’ analysis, which has varyingly been subjected to judicial tests such as absence of profit-motive, four-factor test, and proportions of copying read into it. The Committee’s recommended restrictions would render the provision hollow insofar as educational material is concerned.

Fourthly, the preposterous recommendation to prohibit/restrict storage of copied works in digital form during a global crisis like the Covid-19 pandemic betrays a myopic understanding of copyright law. Even before lockdown forced all levels of schooling to move online, online education was becoming more common. Today, millions of students and teachers across the country stand in a precarious position as even the existing Copyright Act lacks clarity on online teaching (Namratha breaks down the complications, here). 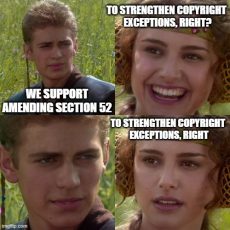 It is disheartening to see that at a time like a pandemic, when avenues of research and education are in a sore need of upgradation, the Parliamentary Standing Committee’s recommendations on Section 52(1) ask the copyright regime to move backward in time. The extensive restrictions threaten to reduce an already rigid Section 52(1) to a footnote in the proprietary copyright regime. Interestingly, in a Copyright Reform Agenda prepared by ‘Like-minded IP Teachers’ last year, academics from across the country had proposed amendments that do the exact opposite: broaden Section 52(1)(a) and expand educational use exceptions to incorporate online teaching. This complete contradiction is a harsh reflection of the lack of stakeholder consultations with IP academics in the making of this Report.

One of the Report’s better recommendations is the establishment of community libraries and upgradation of existing ones for easier access to foreign authors’ expensive works for students and academicians. In particular, it asks the Central Government to implement at the earliest, the ‘National Mission on Libraries’, a Ministry of Culture initiative that was launched way back in 2014 to revamp the network of libraries in India. NML’s aim was to upgrade the infrastructure of hundreds of District and State libraries, undertake digitization measures, provide training programmes to personnel and set up the National Virtual Library of India. The latest updates on work regarding NML is available on the here. Along with a strong network of physical libraries, it is becoming increasingly important to build accessible digital libraries, not only because of the lockdown, but also to keep our information sciences network up to date with the demands of the digital age (see Divij’s post on this, here).

Turn to Berne Convention… but from where?

Moving forward to another strange recommendation, the Report, pointing to copyright exceptions, suggests that a study of the Berne Convention be undertaken to establish a copyright regime that is beneficial to both right-holders and the public.

Without any proper explanation, this comes across as confusing because India’s Copyright Act is already compliant with Berne Convention. Berne’s ‘three-step’ test, reinforced by the TRIPS Agreement, requires any exceptions from copyright (i) be specific, (ii) not conflict with normal exploitation of the work, and (iii) not unreasonably prejudice legitimate interests of the author.

The Report does not provide any specific changes supposedly needed in the exceptions or elsewhere to make the law Berne compliant. At best, one might guess the reference is to the educational use exception discussed above (read Prashant’s take on why the DU Photocopy reasoning fails the three-step test). Admittedly, it would be advantageous to specifically lay down the contours of the exceptions in Section 52 to eliminate any vagueness. This however should not mean the narrowing down of their scope. One must not lose sight of the fact that access to education in India is inhibited by the country’s socioeconomic realities in a much more pervasive manner than it is in developed nations. Recognising this, India had once been the leading proponent among a group of developing countries pushing for the (ultimately unsuccessful) Stockholm Protocol, seeking to accommodate wide-ranging exceptions into Berne Convention to allow educational use of copyrighted material.

Expressing concern for the harm suffered by copyright societies, and by extension right-holders, due to the delays in processing of copyright society renewal applications, the Report recommends extending the validity of registration from 5 years to 10 years. While this would undoubtedly relieve copyright societies of a huge burden, it must be noted that this is a legislative solution to what happens to be a persisting administrative problem. Validity period notwithstanding, measures must be implemented for the smoother processing of applications in the Copyright Office.

Much has been said on this blog before on the controversial position of Section 31D, which allows the fixation of royalties for statutory licensing of literary or musical work and sound recording, for the purpose of radio or television broadcasts (see here, here, here, here, here, and here). After a dubious Office Memorandum by DPIIT, a few constitutional challenges, disputes between major music labels and streaming services and the scrapping of the Appellate Board itself, most people agree that regardless of what the right interpretation of Section 31D is – it ought to include internet broadcasts. It is therefore promising to find the Report recommending exactly this. The past decade has seen a phenomenal shift towards online music-streaming services such as Spotify, Wynk, Gaana and the like, making it absolutely necessary for copyright law to keep up with music consumption patterns.

Although there are some welcome suggestions in the form of statutory licensing for internet broadcasts and promotion of the community library system, the Report suffers on many counts. It is vague and lacks explanatory reasoning behind its recommendations, heavily favours right-holders over public interest concerns, and even displays an incomplete understanding of copyright in some regards. Another major issue is that it only superficially touches upon issues relevant to copyright law. Keeping with the right-holder oriented theme of the Report, other highly pertinent questions which concern users of copyrighted material (criminal remedies for infringement, intermediary liability, free speech online, status of orphaned works, government ownership of copyright) have not been looked into.

Most worrying is the stand to weaken Section 52(1). We have noted before that unlike other jurisdictions, copyright law in India stands in a precarious constitutional position in that it regulates the freedom of speech and expression under Article 19(1)(a), but finds no clear mention in the reasonable restrictions under Article 19(2). By allowing ample space for public’s access to education, research, and culture, Section 52 facilitates the fulfilment of this guarantee of free speech. For copyright law to accommodate the needs of free speech in India, Section 52(1) will have to uphold its legitimacy by providing the public its due.