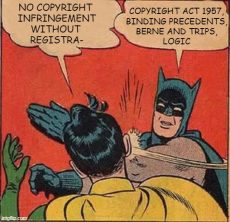 Earlier this month, the Bombay High Court ruled that registration of copyright is not mandatory for obtaining relief in an infringement action. Seemingly a statement of the obvious, this decision by Justice GS Patel corrects a nine-year old blunder by a coordinate bench of the same court in Dhiraj Dewani v. Sonal Infosystems that had refused relief due to the absence of registration. As Rahul Bajaj explains here, the court in the said case had taken it upon itself to read into the legislative framework a requirement that did not actually exist. The present decision, Sanjay Soya v. Narayani Trading carefully deconstructs the flawed presumptions in its predecessor and declares it per incuriam. In this post, I will first discuss the judgment itself which rights the judicial position, and then I will re-examine the policy of automatic copyright protection in light of modern realities in the developing world.

The dispute at the centre of Sanjay Soya was fairly straightforward. Both parties sell soyabean oil. The plaintiff accused the defendant of copying its label which is a registered label mark as well as a piece of original artistic work enjoying copyright protection. The labels of both parties contained a yellow colour scheme, the image of a family, depiction of soyabeans and a teardrop oil device.

On the trademark question, the court promptly found the defendant’s label to be deceptively similar and likely to cause confusion. It also concluded that this was a case of passing off owing to dishonest adoption and an attempt to encash the plaintiff’s goodwill and reputation.

The defendant resisted the claim of copyright infringement through various arguments. It challenged the plaintiff’s ownership of the copyright in the label by arguing that only the artist and not a commercial entity like a company could own copyright under Section 17. This argument was easily shot down as the case fell squarely within the bracket of Section 17(c), with a former employee having designed the label for the plaintiff. It also unsuccessfully argued that trademark and copyright protection could not subsist concurrently over the label. While the defendant failed to show priority in its use of its label and could not prove the label art to be unoriginal either, it pleaded that in light of the Dhiraj Dewani precedent, relief for copyright infringement could not be claimed if the same was not registered.

Dhiraj Dewani was a case concerning infringement of taxation software with a plea for civil and criminal remedies brought under Sections 63, 63B and 64. In these provisions conviction is possible only if infringement is done knowingly. The Single Bench noted that penal provisions were required to be interpreted strictly. It took the view that an infringer cannot be expected to know about copyright existing over any work unless it is registered and published in the Official Gazette. Thus, it went ahead and read the optional registration provision in Section 45 as compulsory.

In Sanjay Soya, this judicial overstepping was declared per incuriam (para 28, 61). This is because the ruling in Dhiraj Dewani was made in ignorance of as many as 4 previous judgments of Bombay HC which had held copyright registration to be optional. The first of those, Burroughs Wellcome v. Uni-Sole, had even been cited before the Single Bench, but the final decision had neither followed it as it was bound to, nor had it given reasons to distinguish itself from it. Justice Patel explains that if the Single Bench disagreed with the previous decisions, the question had to be referred to a larger bench with explanation as to why reconsideration was needed. He then notes how the doctrine of stare decisis prevents a decision rendered in ignorance of decisions binding on it or of an applicable statute from being elevated to the status of precedent, as it happens to be per incuriam.

He then explains why the legal position taken in Dhiraj Dewani is wrong:

Firstly, Dhiraj Dewani incorrectly equates the trademark and the copyright regimes. While registration under the Trade Marks Act, 1999 is mandatory under Section 27 for conferment of special rights unavailable to an unregistered proprietor, there is no parallel mandate in the Copyright Act, which accords protection from the point of creation of the work. Section 45 allows that copyright in any work “may” be registered. It is also noted that a proposal to make registration mandatory in the Copyright Bill 1955 was dropped after the JPC Report cautioned that it would create an undue restriction in the exercise of rights.

Secondly, the very nature of copyright recognizes and rewards original expression. No forger wonders about the originality of her work after completing it, she is always aware of it. Copyright infringement is the presenting or using of another’s work as one’s own, and thereby illicitly availing the rights exclusive to the owner. This exclusivity cannot be subject to registration. The court notes that automatic protection is a fundamental principle of both the Berne Convention as well as the TRIPS Agreement.

Lastly, it rejects the idea that the special jurisdictional provision under Section 62 of the Copyright Act to sue a defendant in a court where the plaintiff is situated is available only to registered copyright owners.

With this excellently reasoned analysis, the court concluded that a case for copyright and trademark infringement, as well as for passing off is made out.

The present decision was confined to ascertaining the correct position of law, which as it stands, clearly makes copyright protection automatic. From a policy standpoint, the concern raised in Dhiraj Dewani regarding the difficulty in ascertaining copyright ownership without registration is not entirely unfounded. It is linked to the larger discourse regarding the feasibility of a formalities-based copyright system. In recent years, the primary argument advanced by most scholars favouring (some form of) a mandatory registration system has been the promise of legal certainty regarding copyright claims. For a policymaker, Sanjay Soya’s reasoning regarding forgers who always know that they are committing forgery does not account for the difficulties and heavy search costs incurred by legitimate potential users of work in ascertaining copyright claims so as to obtain necessary licenses.

Coupled with the relatively low threshold of originality, automatic protection allows works to be easily locked up outside the public domain. This problem is particularly amplified in case of orphaned works, where the lack of traceability of owners and fear of litigation impedes their use. In jurisdictions like India and UK where mechanisms are in place to allow users to license orphaned works, prospective users are burdened with unclear and onerous procedural requirements that may discourage downstream creativity. Scholars like Prof van Gompel suggest that registration and maintenance of digital copyright databases would go a long way in creating certainty regarding authorship, ownership, and term of protection; thereby helping mitigate licensing hurdles and encouraging the free flow of information.

While these advantages are no doubt promising, a formalities-based copyright system is to some extent antithetical to the philosophical notion of copyright which regards original expressions entitled to protection by virtue of their creation from the mind. To deny protection to such works without formalities would be to impose additional entry-level barriers on authors to enforce rights.

A further advantage that is often discussed is that the introduction of formalities is in the interest of the public, as greater barriers to protection would allow works to easily slip into the public domain, thereby enriching it. On the face of it, this is a promising argument. However, practically, in India and in other developing countries and LDCs where a vast majority of authors operate under social, financial, digital and informational limitations, mandatory registration would significantly impede them from protecting their rights. Many uninformed individuals and groups, including those who would otherwise be able to prevent the use of their traditional cultural expressions through copyright law, may become easy prey to misappropriation. Commercial content creators such as established filmmakers, musicians and publishers would be heavily advantaged over individual creators. Mandatory formalities would thus create benefits that would be skewed along the lines of the pre-existing hierarchy of privilege in society.

Prof Dev Gangjee suggests a mid-way approach to this. He contemplates a two-tier system where protection for an initial number of years may be automatic in order to allow authors to estimate the commercial potential of their work, subsequent to which, continued protection could be subject to registration. If not registered, the work may either fall into public domain or enjoy a narrower spectrum of rights with limited remedies. This offers a good compromise between the extremes, but the feasibility of its application to the Indian copyright regime requires detailed study and analysis. What is clear however is that while registration and maintenance of databases offers significant benefits, a wholly mandatory registration system is unsuitable for present Indian realities. A solution to the orphaned works problem will have to be obtained by simplifying procedures and issuing clear guidelines. It cannot be achieved by hindering copyright enforcement through measures that disproportionately affect the underprivileged.