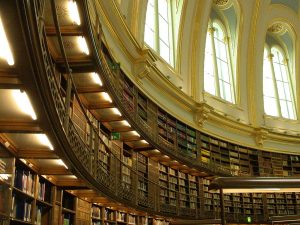 Quarantine and lockdown in the midst of the CoViD-19 pandemic has left entire populations without physical access to schools, colleges and public libraries. Even more than before, this has shone a spotlight on the digital access to cultural and educational resources. Taking a cue from Namratha’s insightful post on the responses of copyright law in such a situation, in this post I explore the many legal contentions around the ‘digital’ access to libraries, particularly in the present moment.

“Essentially, CDL must maintain an “owned to loaned” ratio. Circulation in any format is controlled so that only one user can use any given copy at a time, for a limited time. Further, CDL systems generally employ appropriate technical measures to prevent users from retaining a permanent copy or distributing additional copies.”

This has generated a contentious debate in the US about the limits of copyright law in an emergency. Another mass digitization repository, HathiTrust, has also made emergency provisions for libraries to provide digital access to their collections, through its Emergency Temporary Access Programme. The National Digital Library of India, a project of the Ministry of Human Resources, according to press releases, has also ‘opened up’ close to 7 million copyrighted books and articles for students, apparently released under a ‘national license’ (what this license may entail is unclear to me).

Digital works have posed major challenges to copyright which remain unresolved even after decades, particularly under Indian law. The digitization and sharing of literary works and books has, unsurprisingly, generated its fair share of controversy. The legality of book-lending efforts like Controlled Digital Lending has not been determined in India or in the US. We can, however, speculate on the legal basis for these efforts in India. Any defence against copyright infringement for the purpose of digital lending would primarily rely on two defences – first, that the ‘lending’ of a lawfully possessed copy of a literary work does not infringe copyright as defined under Section 14 of the Copyright Act; and second, that the use is, in any event, fair dealing, protected under Section 52 of the Copyright Act.

The doctrine of copyright exhaustion or the ‘first sale’ doctrine is a part of Indian law, flowing from Section 14(ii) of the Copyright Act, which grants the exclusive right to the owner of copyright to ‘issue copies of a work, not being copies already in circulation’. The language of the Act allows copies which have already been sold or legally distributed to be redistributed by an authorised buyer or owner of a copy, and such resale or redistribution would not be an infringement of copyright. The exhaustion doctrine is relied upon both for the resale of second-hand books or the lending of books by libraries. However, the nature of digital works and the ease of their reproduction has made this doctrine difficult to translate into the digital world. Digital works are copied in almost every computing or networking transaction, whether within a computer or through a network. How, then, should copyright law deal with the notion of ‘digital’ redistribution?

A US court, in the case of Capitol Records v ReDigi, held that the first sale doctrine does not protect a digital music ‘resale’ service which attempted to ensure that only one copy of a work existed at a time, by deleting, bit-by-bit, the ‘original copy’ of the reseller. The court stuck to a textualist interpretation of the copyright owners’ right to issue copies, holding that the music resale service still implied the creation of unauthorized copies of a copyrighted work, both in the service of the intermediary (ReDigi) as well as the ultimate buyer of the resold song.

The CJEU, on the other hand, permitted a Dutch library to continue its ‘ebook lending’ program which provided only one validly purchased copy to one subscribed user, applying a more purposive interpretation of the right to issue copies for digital works. Essentially, the CJEU held that the lending of a digital copy of a book will be held to the same standard as the lending of a physical copy. However, this was in the context of specific legislation introduced in the EU, namely, the Rental and Lending Directive.

In the absence of similar legislation or any judicial precedent on the scope of digital exhaustion in India, it remains unclear how courts would consider the scope of ‘copies already in circulation’ for the purpose of digital works. Ultimately, it may depend on the model adopted by a library or lending service – if sufficient efforts are taken to ensure that the ‘lending’ of books creates artificial scarcity, such as in a ‘one-to-one’ lending model, such an interpretation may serve the purpose of allowing digital access to libraries while maintaining the prevailing incentive model of copyright law.

Libraries intending to engage in ‘digital lending’ can also potentially argue that such lending falls under one of the exemptions to copyright under Section 52. Three exemptions could potentially apply in this situation. First, the libraries may argue that the digitisation and sharing of books constitutes ‘private or personal use, for research’ which is exempted under Section 52(1)(a)(i). In the landmark judgement in CCH v Law Society of Upper Canada, the Supreme Court of Canada gave a broad interpretation to the term personal use and research, in the context of a public library sending copies of copyrighted works to its patrons.

Whether an activity constitutes fair dealing is a contextual question to be decided on the facts of each case, taking into account a number of factors, including available alternatives and the nature of the dealing (commercial or non-commercial). This makes it an important right to rely upon in times of emergency as the present, where one of the few possible alternatives to schools libraries is digital access. Controlled Digital Lending, properly implemented, can likely rely upon this exemption, particularly in the state of exception that we are currently in.

This expansive reading of Section 52(1)(i), in my opinion, provides ample ground for university and school libraries to provide digitised versions of course packs, as well as other library collections to their students through a version of Controlled Digital Lending.

That said, creating the infrastructure for digital learning requires more than just a sound legal basis or innovative licensing terms for digital works. The public library system in India has been neglected for decades, and for all the hype around ‘Digital India’, little effort has been put into accessible remote education through the internet. The NDLI itself has repeatedly run into hurdles, and while it has an ambitious mission statement, it barely compares to efforts like HathiTrust or the Internet Archive. It shouldn’t take a crisis to realise that our laws and our public educational institutions are in dire need of reform.