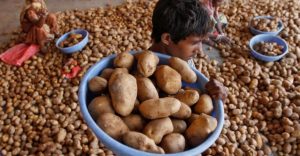 We’re pleased to bring to you a guest post by Shalini Bhutani. Shalini is an India-based independent legal researcher and policy analyst working in the Asian region.

One day intellectual property rights (IPRs) in the seed sector granted to MNCs would entrap farmers. This is precisely what farmers’ groups and concerned citizens in the country had been warning against, ever since India chose to introduce IPRs through the Protection of Plant Varieties and Farmers’ Rights (PPV&FR) Act, 2001. IPR infringement suits against farmers are just about beginning in India.

Last year onward PepsiCo India Holdings (PIH) Pvt. Ltd. has been pursuing legal action against both rival local firms[1], a cold storage and seed business[2] and four farmers collectively[3] in Gujarat whom it believes are infringing its IPRs. Early this year too it reportedly came across farmers in Gujarat growing its IPR-protected potato varieties. The company employed a private intelligence agency, namely Indus IntelliRisk and IntelliSense Services Pvt Ltd. to visit certain farmers’ fields in January and February 2019. It then commenced individual suits to stop four farmers from using its potato plant variety FL 2027 (commercial name FC­5).[4] The company alleges that these farmers have been producing the variety without its permission. According to PIH, this is ‘infringement’ as per Section 64 of the PPV&FR Act.

The suits were filed in early April 2019 in the Commercial Court in Ahmedabad, Gujarat for:

An ex parte ad interim injunction was granted to PIH on 10 April 2019. The farmers have been summoned to appear in court at the next hearing on 26 April 2019.

Potato (Botanical name: Solanum tuberosum L.) is one of the 151 crop species that are open for registration under India’s PPV&FR Act.[6] No farmers’ varieties of potato have so far been registered. As of end of February 2019, a total of twenty-five potato varieties have been granted IPR under the Act (see table below). A certificate of registration for a variety confers an exclusive right on the breeder to produce, sell, market, distribute, import or export the said variety.

Not surprisingly, other than by the Indian Council of Agricultural Research (ICAR) the registrations for potato are by dominant private sector players. HZPC Holland B.V. – a Dutch MNC, is the world’s largest potato supplier. Mahindra HZPC Pvt Ltd is a (60:40) joint venture of Mahindra Agri Solutions Ltd (a group company of Mahindra & Mahindra Ltd) and HZPC Holding B.V. HZPC is also member of Breeders Trust, which is an organisation of ten leading European potato breeder companies. Breeders Trust supports these companies in the implementation and enforcement of their plant breeders’ rights and in the prevention of the illegal trade in plant propagation material.

PepsiCo is an American MNC formed in 1965 with the merger of the Pepsi-Cola Company and Frito-Lay, Inc., with headquarters in New York, USA. PepsiCo’s snack food company, Frito Lay, is the leader in the branded potato crisp market and manufactures Lay’s Potato Chips. The process-grade varieties of potato FL 1867/FC3 and FL 2027/FC5 are central to this chips brand. PepsiCo India Holdings (PIH) Pvt Ltd, a subsidiary of PepsiCo Inc. was incorporated and registered in India in 1994 under the Companies Act, 1956.

PepsiCo entered India in 1989; the same year it set up a potato R&D farm in Sangrur, Punjab. From a mini-tuber laboratory there potato plantings are supplied to farmers across India and even exported to other countries.

Potatoes are one of the primary crops in which PepsiCo has a direct relationship with farmers. This is in two ways: one, for multiplication and production of potato seeds, and two, for cultivating the potatoes to be used in the manufacture of its chips. PIH has been undertaking contract farming of potatoes in several states, the first being Punjab in 1995. Over 50% of the company’s procurement comes from contract farming. But it is since 2004-05 that it started what it calls ‘collaborative farming of process-grade potatoes’ in India. Under a contractual agreement with farmers, it supplies its ‘proprietary advanced seed varieties’ FC3 and FC5. This does not mean that the potato seed is always of best quality; there have been instances in the past when PIH reportedly supplied defective potato seed to farmers.The assured buy-back of the produce at pre-agreed prices makes the contract attractive to farmers.

The contract that the company enters into with farmers, usually has specific stipulations on its proprietary materials:

Grower represents and warrants that it shall not, during the subsistence of this agreement:

(i) sell or dispose of the PIH variety potato seeds or multiplied chip grade potatoes to any person or company other than to PIH or any party designated, in writing by PIH; or

(ii) use the PIH variety potato seeds, for any purpose, other than multiplication under the terms of this Agreement.

The contract does not allow its farmers to sell in the open market; except in cases where the PIH needs have been met and the production is more than expected. A 2014 research paper points out that till that year the company had not pursued legal action against ‘defaulter’ farmers. The company has chosen to initiate legal suits only after getting IPR protection over its potato varieties in India.

Gujarat is amongst the top five states in India for its share of potato production, followed by Punjab in sixth place.[10] Deesa, in Banaskantha district has emerged as the centre of potato production in Gujarat. Farmers in the potato-producing region of Gujarat may get their seeds and propagating material directly from the company or from local seed dealers. Irrespective of the source, if farmers have saved some planting material from their potato harvest, the question is if the re-use of that is an infringement of PIH’s PVP. The company asserts that it is.

There is also a grey market of potato tubers that exists. Sometimes spuds too small for processing are left over; these find their way through seed traders to the farmers. Often they may not be marketed in the original name or denomination that is IPR-protected. Therefore, until and unless governments are able to plug this supply, the farmers run the risk of being at the receiving end of IPR infringements, while the seed dealers/traders ought to be held accountable. Those ‘copying’ seeds can be penalised invoking Sections 68 to 71 of the PPV&FR Act.

These cases also raise the larger issue of public sector responsibilities. If there were more public sector varieties, which were preferred by farmers and a ready market for the produce from them, then perhaps the farmers would not get locked-in into corporate contracts. Interestingly, while PIH avers that FL 2027 is similar to ICAR’s Kufri Chipsona-3, yet its claim for PVP is that it is a DUS hybrid/line that differs from the latter.

Another aspect to consider is how public sector institutes play a support role to the IPR system. Most SAUs and other ICAR R&D institutes are now occupied in testing the distinctiveness, uniformity and stability (DUS) of the sample planting materials deposited in the processing of PVP applications. The DUS testing centres for potato are: ICAR-CPRI, Shimla and two Central Potato Research Stations at Modipuram and Jalandhar respectively. In fact, an international DUS testing workshop on potato was conducted by the PPV&FR Authority at ICAR-CPRI last year, with the company representatives of PepsiCo, Mahindra HZPC, Rasi Seeds and ITC attending.

PepsiCo imports the tissue plantlets of FL 2027 from Frito Lay, USA via ICAR-CPRI. In the present cases, PIH not only conducted genetic fidelity tests of the farmers’ tubers in its lab in Zahura, Punjab, but also sent 9 farmers’ samples to ICAR-CPRI, Shimla, Himachal Pradesh to compare with the reference potato sample of FL 2027.

FL 2027 is the hybrid of Frito-Lay’s proprietary FL 1867 and the publicly bred Wischip variety of the University of Wisconsin. So there too a product of the public sector is involved. That is also the reason ICAR institutes themselves seek IPR on extant (existing) varieties; if ever the planting material becomes interesting to seed companies for crossing then the terms and conditions for use of the public variety can be negotiated.

Successive governments have for long projected the PPV&FR Act as being a law in favour of farmers. If indeed it is, then the Authority must insist on legal interpretations that do not go against farmers.

Section 39(1)(iv) of the PPV&FR Act recognises farmers’ freedoms to save, use, sow, resow, exchange, share or sell their farm produce including seed of a protected variety. This is over and above all other provisions in the Act by virtue of the words ‘(n)othwithstanding anything contained in this Act’. The proviso to the section only puts an embargo on farmers with respect to the sale of branded seed of an IPR-protected variety. Section 28 of the Act grants exclusive rights to breeders who have registered their varieties. But as per the text of the law, the infringement provision in Section 64 is ‘subject to the provisions of this Act’ and therefore can be said to be subject to Section 39 as well. The three provisions have to be read harmoniously in the light of the legislative intent.

In the present cases, it is to be established if the farmers sold potato seed (to be cultivated), or the unprocessed potato produce that is the raw material to make Lay’s chips. In either case, the concerned authorities must clarify the legal situation. The government must be watchful of any dilutions of the so-called farmers’ rights by companies and courts.

PIH clearly seeks to use the legal system against anyone threatening its legally granted breeder rights. Seed MNCs have also gone after farmers in other jurisdictions, such as in USA and Indonesia to aggressively protect their IPRs. The most famous case being that of a Canadian farmer Percy Schmeiser sued by the biotech seed giant Monsanto for patent violation of its genetically modified Roundup Ready canola, when the seeds had accidentally landed on his farm.

Meanwhile, the farmer-friendly veil of the PPV&FR Act has clearly been lifted. The entrapment is evident.

Four of the legal suits initiated by PepsiCo India Holdings (PIH) Pvt Ltd against potato farmers of North Gujarat came up for hearing on 26th April 2019 in the Commercial Court in Ahmedabad, Advocate Anandvardhan Yagnik has filed his appearance and vakalatnama on behalf of all farmers in the 4 suits and has sought time to file reply. PepsiCo on its own submitted to the learned Commercial Court that it wants to settle the dispute with the farmers. Plaintiff-company is suggesting that either farmers give an undertaking that they shall not use registered variety or they should enter into an agreement with PepsiCo India to purchase seeds from it and thereafter also produce and sell to it on terms and conditions which PepsiCo India has been offering to farmers of Gujarat. To the very idea of settlement, Advocate Yagnik submitted to the court that a proposal be put to farmers and a reply shall be sent to the company based on what farmers want to do. The next hearing will be on 12th June 2019.

[5] Full list of crops species that are eligible for IPR under the PPV&FR Act: http://plantauthority.gov.in/List%20of%20150%20Crop%20species%20registration%20under%20Extantaandfarmers.htm

[6] UP, WB, Bihar, MP and Gujarat are the top five states in potato production in India. http://agricoop.gov.in/sites/default/files/Monthly%20Report%20on%20Potato%20for%20March%202018.pdf