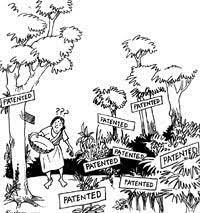 Highlights from the Report

The Committee Report’s observations on TK start off with a lament on how TK and indigenous inventions by grassroot level innovators often do not meet the criteria of patentability and how the lack of a proper statute renders such inventions without protection. It notes the lack of awareness about IP rights amongst communities that hold substantial TK which has led to practitioners not gaining monetary benefits from the system.

The Report’s first target is Section 3(p) of the Patents Act, 1970 which says that “an invention which in effect, is traditional knowledge or which is an aggregation or duplication of known properties of traditionally known component or components” will not be considered an invention for the purposes of the Act. The Report notes that this Section is too prohibitively worded. Thus, it suggests that this provision should be revised to ensure that TK-based research and development is incentivized. Further, it suggests that there should also be provisions, when this revision takes place, to ensure the investigation of patent claims concerning TK in order to prevent its misuse/exploitation.

Focusing on cases of misappropriation of TK, the Report notes the absence of a proper mechanism for documentation of TK and also notes the shortcoming of the Traditional Knowledge Digital Library (TKDL) in being effective as a source of TK and its protection. The blog has seen posts noting certain shortcomings of the TKDL in the past, such as here. For this, the Report recommends strengthening the database, without delving into what exactly the shortcomings are or the measures to be taken to correct them. Another intriguing suggestion in this respect is the proposal to make the Government a joint owner in claiming IP rights alongside creators/communities to restrict misappropriation.

The Report also recommends the “registration of traditional knowledge as Geographical Indication” (pg. 76 of the Report) if it is closely linked to a specific location. This, it suggests, would be “highly beneficial to consolidate traditional knowledge into IPRs”. The Report then discusses the need to study Utility Models / short-term patents as an alternative form of patents that may be a viable means to protect TK in the country.

The Report takes a rather simplistic stance in its understanding of TK and the protection it needs to be accorded. Firstly, it treats as given the definition of TK. One of the biggest hindrances with respect to the intersection of IP and TK is the difficulty in defining what exactly entails traditional knowledge. Given this difficulty, merely suggesting that patenting should be made available to innovations or improvements that build on TK does not address the issue of a lack of a definition for what exactly is being protected, why it is being protected, and how exactly the intended beneficiaries will actually benefit from this.

The Report presents a shifting focus from defensive protection to positive protection of traditional knowledge systems in the country. Defensive protection would entail mechanisms such as the TKDL which was created with the intention to prevent people from outside the community possessing traditional knowledge from acquiring IP rights over such knowledge. Positive protection, on the other hand, entails actively bringing in TK to the conventional IP regime to accord it protection and to create pathways for its commercial exploitation. This protection is either embedded into a country’s existing IP framework or through sui generis legislations/ systems such as Kenya’s Protection of Traditional Knowledge and Cultural Expressions Act, 2016 and Panama’s Special System for the Collective Intellectual Property Rights of Indigenous Peoples.

It is interesting to note that the focal point of the recommendations is on the potential economic benefits of inclusion of TK in the formal IPR regime. This sort of singular focus fails to recognize the limitations of the formal IP regime in protecting TK. It places too much emphasis on the propertization of traditional knowledge than recognizing its cultural value or any other significance for the originating community. Such an emphasis overlooks the fact that the cultural value, beliefs attached to TK is of more significance to the community. If economic interest is made the focal point of such intervention, then technologies that evolve through TK and as a response to traditional ways of living, could lose out their cultural significance or worse, it could lead to cultural erasure. Recognition and respect for traditional values and culture, thus, should be the focal point. It also fails to assess what value a community may place in bringing their TK within the formal IP system. It seems to address the communities as parties that will only benefit from the benevolence of IP protection rather than as legitimate creators and stakeholders.

Patents as a Panacea?

The Report suggests, without evidence, that exclusion from the formal IP regime is the cause for neglect of TK. It goes on to recommend that creators and holders of TK should be made aware of the concepts of novelty and inventive step. Without much background, the suggested model for bringing in TK to the IP regime is through the government acting as a joint owner (this partnership model and its implications will be discussed further in an upcoming guest post). In doing so, it fails to consider how transforming TK into a product that fits the patentability criteria could possibly change its character and significance for the creators/practitioners wherein its economic value is prioritized over any inherent or cultural value such TK may possess. This model also fails to recognize originator communities as the custodians of their traditional knowledge. While suggesting the government to act as a joint owner, it ignores government induced marginalization and oppression of such communities (see examples here, here, and here). And finally, apart from the mention of preventing misappropriation, the Report does not give any clear indications on how exactly the government being a joint owner will benefit creators.

The Report also does not elaborate on how it proposes to secure community protection for TK within the formal IP regime when the latter is almost exclusively designed to recognise individual contribution while according their works protection. It also fails to recognize that the incentive that formal IP protection provides in terms of ownership and commercial exploitation need not necessarily be the driving factor of innovation within traditional or indigenous communities.

The lack of nuance in the Report exhibits that it has not deliberated upon the issue of how traditional knowledge systems are liable to be both overprotected with access barriers being created and also not be fully encompassed within the formal IP regime. In that, by inducing the concepts of inventive step and novelty in TK, there would be rise in the costs of innovation. TK is often the result of incremental and collaborative efforts that tends to span over generations. When a system like TK which relies heavily on oral communication for its propagation is formalized, the recipient communities of such knowledge would face access barriers that did not exist prior to the introduction of such a system. Simply creating awareness of technical concepts such as novelty only goes to signal that TK in its existent form is not deemed worthy of protection unless it tailors itself to fit formal IP requirements.

On the other hand, the formal IP regime also cannot fully encompass TK systems as formal IP outputs often fail to account for the manner in which traditional knowledge systems tend to operate in terms of innovation, creation, or propagation. Much of the traditional knowledge passed down through generations reinforces and consolidates cultural expression and identity. This, then brings up the issue of cultural privacy. An example of this can be found in Foster v. Mountford, an Australian IP case wherein an anthropologist had recorded and published cultural information about the Pitjantjatjara community, aboriginal peoples from south and central Australia. The community sought to stop (and an injunction was granted in their favour by the Federal Court) the dissemination of this information as they believed that it would lead to the disruption of their culture and society when people outside the community got hold of it.

The Report’s emphasis on commercializing TK to ensure that the practitioners are not deprived of potential economic benefits overlooks the inherent limitations in the formal IP regime and provides very uncritical suggestions that do not justify how or why they are necessary. The Report fails to engage with the discourse on the concerns that exist with respect to indigenous identity, culture, and economy when it comes to engaging IP and traditional knowledge. It fails to recognize potential conflicts between the formal IP regime and TK systems. It also fails to arrive at viable solutions that would prevent the appropriation and exploitation of traditional knowledge that is not limited to modifying innovation in traditional knowledge systems to fit into the existing IP framework. In all, it takes a very superficial approach when dealing with and understanding traditional knowledge systems.