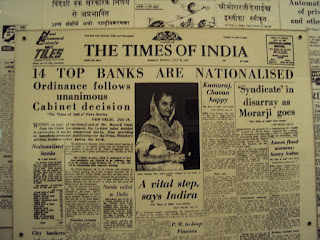 I spent the better part of this morning browsing through the registration details of 100 G.I applications (Applications nos. 100 to 200) at various stages of examination and registration before the G.I.Registry. Of these 100 G.I. Applications, a surprising total of 57 applications, i.e. 57% of the applications, were filed by either the Central Government or a State Government through different authorities, statutory and executive. The list of these applications can be accessed over here and here. I was always under the presumption that G.I. application would be filed by artisan or farming communities. Image from here.
As per the Geographical Indications Act, 1999 “Any association of persons or producers or any organization or authority established by or under any law for the time being in force representing the interest of the producers of the concerned goods” may file an application for registration of a GI. This is in keeping with the overall objective of the G.I. Act, which is to protect the identity of a particular good that has properties which are attributable to a particular region or which are manufactured in a particular region. In my opinion the G.I. Act was meant to help communities to protect the brand value of their goods or foodstuff which had acquired a reputation over several centuries. The G.I. Act was thus meant to empower communities across India, whether traditional or modern. It is thus surprising when you realize that 57% of all applications are being filed by the State and Central Governments.
For instance the G.I. application for ‘basmati’ has been filed by the Agricultural & Processed Food Products Export Development Authority (APEDA) which is a government body and not an association of farmers or mill owners. Interestingly, APEDA has been authorized by an Act of Parliament (available over here) to protect the IP rights of ‘special products’ in India or outside India. The relevant provision of the legislation reads as follows:
Without prejudice to any law for the time being in force, it shall be the duty of the Authority to undertake, by such measures as may be prescribed by the Central Government for registration and protection of the Intellectual Property rights in respect of Special products in India or outside India. Explanation.¯ For the purpose of this section “Intellectual Property” means any right to intangible property, namely, trademarks, designs, patents, geographical indications or any other similar intangible property, under any law for the time being in force.’

APEDA has invoked its powers under this provision to protect ‘Basmati’ in India and abroad. In essence, Parliament has ‘nationalized’ the ‘basmati’ mark which was otherwise the property of private farmers. I’m not sure of the terms of use that have been authorized by APEDA but I just hope that ‘basmati’ farmers, who are the real stakeholders, have adequate say in the manner in which APEDA controls the use of the word ‘basmati’. Image left: Basmati, from here. 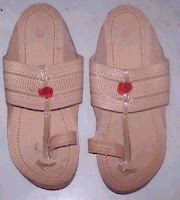 Moving on to some of the other instances, I have to say that most of these registrations appear to be rather odd. For example the G.I. Application (No. 169) for the famous ‘Kolhapuri Chappals’ which is usually manufactured in the Kolhapur District of Maharashtra has been filed by the Central Leather Research Institute (a part of CSIR) located in Chennai i.e. at least a thousand kilometres from Maharashtra. The ‘Kolhapuri Chappals’ are really famous because of the efforts of traditional artisans over the years. Why then is CSIR filing a GI Application for this particular G.I.? Why aren’t the artisans of Kolhapur filing this application in the name of their own association? Image right: ‘Kolhapuri Chappals’ from here.
Similarly the Export Commissioner of the Uttar Pradesh Government has filed at least half a dozen G.I. applications for various GIs such as ‘Firozabad Glass’, Kannauj Perfume, Kanpur Saddlery, Moradabad Metal Craft, Varanasi Glass Beads, Khurja Pottery, Saharanpur Wood Craft. Again, why aren’t the artisans forming communities to register and control the use of their G.Is?
Even stranger, are the instances of Universities filing G.I. Applications. For instance the Kerala Agricultural University has filed a G.I. application for ‘Central Travancore Jaggery’. The same was registered by the G.I. Registry. Similarly the Junagadh University in Gujarat has successfully managed to register the ‘Gir Kesar Mango’ as a G.I. Yet another example from Gujarat is ‘Bhalia Wheat’ which has been registered by the Anand Agricultural University. I can understand universities filing for patents but why are these universities filing for G.Is? Are they producing and marketing mangos and wheat?
Another variety of registrations is joint registrations by a University and an association of farmers or artisans. The ‘Wayanad Jeerakasala Rice’ has been registered as a GI in a joint application by the Kerala Agricultural University and the Wayanad Jilla Sugandha Nellulpadaka Karshaka Samithi. Similarly the Tangaliya Shawl has been registered jointly by the Tangaliya Hastkala Association, the National Institute of Fashion Technology (NIFT) and the Ministry of Textiles. Why are artisan associations sharing their valuable IPRs with these universities and the government? It is not as if Universities can add value to the ‘brand-value’. At the most they can add to the yield or productivity of a certain product.
Yet another oddity in these G.I. applications is when the Central Government starts registering G.I. for products across India. For instance the Development Commissioner (Handicrafts), Ministry of Textiles, Government of India sitting in New Delhi has been filing and granted registrations for the following G.I.s: Sankheda Furniture (Gujarat), Agates of Cambay (Gujarat), Datia and Tikamgarh Bell Metal Ware (Madhya Pradesh), Kutch Embroidery (Gujarat). Both Gujarat and Madhya Pradesh must be at least 700-1000 kilometres away from New Delhi. How do artisan groups in these states access the Development Commissioner sitting in New Delhi?
The issue of State Governments registering G.Is in their own names seems to be quite wide-spread and includes states like Kerala, Tamil Nadu, Karnataka, Andhra Pradesh, Uttar Pradesh, Nagaland, West Bengal. Of the Central Government authorities it appears that the Ministry of Textiles, the Coffee Board and Spices Board both of which function under the Ministry of Industry and Commerce take the lead for the most number of G.I. applications filed in their own names. (Please note that the sample size was limited to 100). I’m sure that this post scratches only the surface of the issue. I hope that somebody is willing to fund some more serious research into the quality of G.I. registrations and whether the artists and farmers have been given their due by the Central and State Governments who seem to own a majority of the G.I.s.