share
If you are an artist or sculptor or just someone who just appreciates good art, the recent episode concerning the destruction and dumping of the sculpture ‘The Flight of Steel’, an iconic sculpture (which was later renamed ‘Murga Chowk’) in Bhilai, is sure to irk you to an uncomfortable degree. 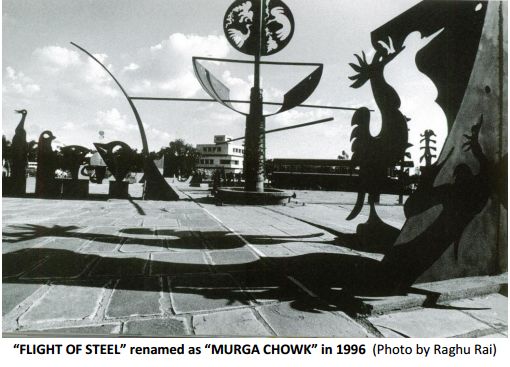 This is a curious case of a seventy year old artists being humiliated after being commissioned by Bhilai Steel Plant to construct a steel sculpture in a designated area covering about 30 square feet. Jatin Das, an eminent artist and sculptor was informed by the guards present during the demolition, that the sculpture was being ‘taken away’ to a zoo known as Maitri Garden. However, to Jatin Das’ dismay, when he visited the zoo premises, he found only bits of his sculpture strewn around, without any apparent indication that the sculpture was to be installed there. In fact, he found different bits of the sculpture in different places, indicating a haphazard and unorganised plan to reinstall the sculpture at a different location – if indeed that was the intention of the officials.
The reason being advanced by BSP officials for such an inexplicable act is that an expansion project is underway and that “one of the flyovers being constructed in the township is passing over the intersection which housed the artifacts”. They have even gone to the extent of claiming that the artifact was ‘carefully removed’, with a view towards reinstallation at a later point in time. However, the images below suggest a completely different picture – the dismantling was done hurriedly and the zoo premises has more rubble than warranted in a carefully executed relocation procedure. 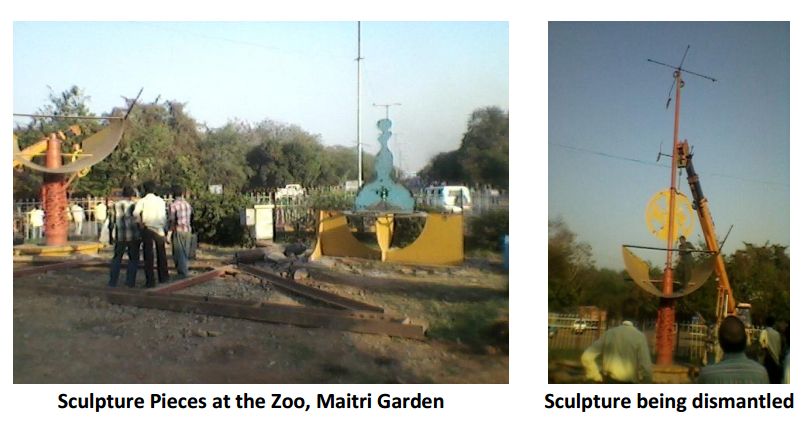 While the dismay and anger being expressed by Jatin Das is understandable, particularly since he was not even informed of such plans, there does appear to be a violation of a definite legal right of Jatin Das, giving way to a cause of action in court if he so desires. Our readers will remember the landmark decision in Amar Nath Sehgal vs Union of India [2005 (30) PTC 253] which was the first Indian case to not only recognise the moral rights of an author of a copyrightable work, but also awarded damages to the claimant.
The facts of the present case relating to ‘The Flight of Steel’, is remarkably similar to the situation that arose in Amar Nath Sehgal as well. There, the renowned artist and sculptor Amar Nath Sehgal was commissioned by the Ministry of Works, Housing and Supplies of the Central Government in 1959 to design and construct a mural. The mural was to be placed around a central arch of the Vigyan Bhawan – a well-known convention centre in New Delhi, where the government hosts and organises several events. The construction, which then Prime Minister Jawahar Lal Nehru personally approved, was completed in 1962. However, in the course of renovation in the year 1979, the mural was removed and only bits and pieces remained of the iconic sculpture that attracted large gatherings and earned widespread acclaim.
Amar Nath Sehgal, understandably dismayed, brought a suit against the government and argued that the dismantling and dismemberment of his works constituted ‘mutilation’ (as provided under Section 57 of the Indian Copyright Act) and further that his honour and reputation as an artist was compromised and lastly, that his authorship rights were at stake since no sculpture remained and his name on the work was obliterated. The defence revolved around issues such as assignment, ownership and dispute resolution mechanisms under the deed of assignment – effectively conceding that the officials did in fact authorise the removal of Sehgal’s mural. The judge awarded damages amounting to Rs. 5,00,000 to Amar Nath Sehgal, relying on the statutory protection afforded to artists under the above mentioned section relating to moral rights.
It seems that a similar claim may be raised by Jatin Das, and if in fact it is proved that the sculpture has been damaged beyond repair, it is very likely that he will be awarded damages as well. For now, we request our readers to spread the word about this incident and pass along this protest note that Mr. Jatin Das sent me this morning to your friends and colleagues.