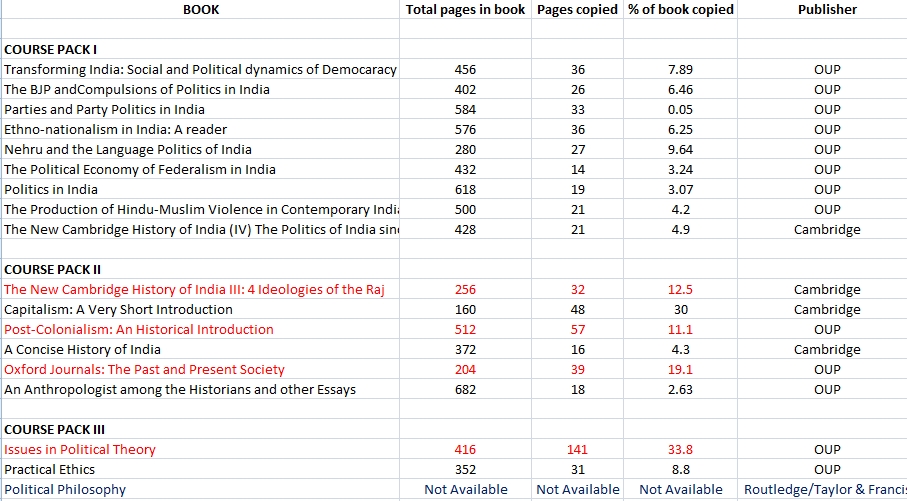 AVERAGE PERCENTAGE OF ENTIRE BOOK COPIED = 8.81 %
The full document can be viewed here. I will be updating this file from time to time with more empirical data. (Note: If there are any errors in my calculation, please do let me know. Calculations are based on figures made available after reviewing the course packs. Any errors are purely accidental and I will be happy to revise the figures if pointed out to me)
This is far below the fair dealing threshold set out in Becker. Even looking at each of the instances individually, it is found that a majority of the cases involve reproduction of less than 5% of the total page count of the book.
Out of the 23 books in question, only 5 extracts exceed the 10% threshold (these have been marked in red in the document). Given that this threshold is likely to be raised to 15-20%, you will find that there is only one instance that breaches this threshold. To suggest that the photocopy shop and Delhi University should have to shell out Rs. 60,00,000 in damages for something like this, is frankly a little disturbing to me. When did we become so fixated on the economic exploits of copyright that we forget the very purpose of the regime – to promote creativity and advance the progress of arts and science?
CONCLUSION
Thus, in my estimation, both tests: the permissible purpose and fairness test have been passed in this case. We are working on producing more empirical evidence to establish fairness and I will be analysing some more legal arguments in my next few posts. I hope for now, this clarifies my stance on the issue of ‘where to draw the line’ and hope we do not appear biased or to be pandering to anyone. I am not advocating the abolition of copyright or stating that merely because students cannot afford these books, they should be allowed to infringe copyright. I simply think that the threshold for infringement has not been breached in this case and therefore public interest considerations aside, even strictly looking at the law, Delhi University and the photocopy shop should be in the clear.
(Disclaimer: These views are strictly my own and do not reflect the opinions of other bloggers on SpicyIP)