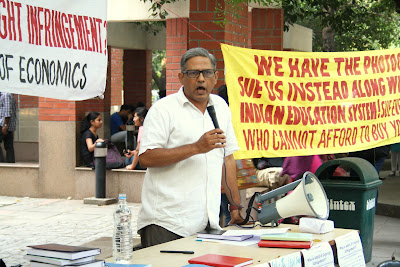 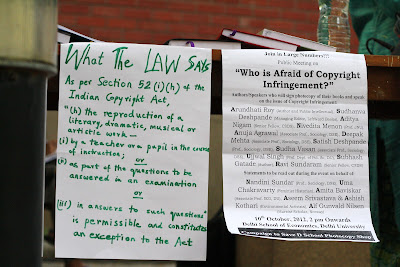 The Delhi University photocopy case, an unsavoury law suit that pits the interests of private publishing houses against the interests of students and educational establishments, was debated by us extensively in posts here, here, here and here.  At least as pleaded in the law suit, the alleged instances of copyright infringement pertain only to educational “course packs” and the vast majority of takings amount to no more than 10% of copyrighted material.
We now bring you a guest post highlighting a protest mounted by Delhi University students and faculty at the DSE (Delhi School of Economics) campus against this copyright aggression.
This spirited protest, which I had the good fortune of witnessing first hand was covered by leading newspapers, as extracted below:
The Deccan Herald wrote:
Authors and teachers came together on Wednesday to show their solidarity against the recent move of the consortium of international publishing houses — Oxford University Press, Cambridge University Press and Taylor & Francis, slapping a case against Delhi School of Economics (DSE) photocopy shop citing copyright infringement.
The publishing houses have also claimed Rs 60 lakh as damages.

“I was the happiest person when my book was put up on the web, giving it open access to all. Knowledge cannot be contained, it has to keep moving,” said Satish Deshpande, head of the Sociology department.

“We don’t even get huge royalties by writing these books. We put in a lot of efforts and years in for the people to read them,” added Deshpande.

Several academic authors signed photocopies of their printed books and donated them to school’s library.

Author and former faculty member of DSE Amartya Sen, who could not come, said, “I am distressed to learn about the attitude of the Oxford University Press (OUP) on the use of photocopied course packs for the benefit of students.”

The Indian Express Reported:
During a meeting at Delhi School of Economics, many of the authors, whose works are prescribed as “essential reading” in the university syllabi, backed the students.

A professor at JNU, Menon was among the teachers who signed their photocopied books and donated them to Ratan Tata Library.

Historian and former DU teacher, Uma Chakravarti was not present at the meeting, but she sent across a signed copy of her book “The Social Dimensions of Early Buddhism”, along with a statement.

“For an academic, the photocopying revolution is as important, or even more so, than the Neolithic revolution and the Industrial Revolution. All my works are mine and my labour. The more it is read, the more fulfilled I am as a scholar. Copyright go to hell,” the statement read. 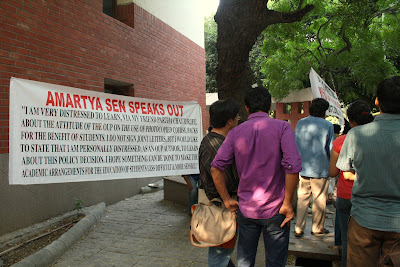 And now for the guest post by Chandana Anusha, a PhD student at the Delhi School of Economics (DSE)
Who’s Afraid of Copyright?
By:  Chandana Anusha
In a symbolic protest to the three publishing houses that have filed a legal suit against Delhi University and the D-school photocopy shop for copyright infringement, several academics gathered to sign photocopies of their books in the DSE (Delhi School of Economics) campus yesterday. These photocopied versions will be handed over to the library. The protest was also attended by students from across the university, academics, lawyers, and representatives of dissenting publishing houses.
In their statements against the legal suit, they spoke of the murky intricacies that entail the business of publishing, the larger paradigm of which it is a part, the need for radical alternatives to corporatized publishing, the possible ways in which these alternatives can be imagined and concretized.
‘Most academics are distressed by the legal suit, and refuse to cow down to the publishers’, said  NiveditaMenon, a leading professor of Political Science, at Jawaharlal Nehru University. Amartya Sen’s letter calling on the publishers to was widely plastered on the walls.
Refuting the existing idea of the legal suit being in the interest of the authors who lose out on sales, the academic authors, some of whose books were allegedly infringed made it clear that the case did not, in any way, work in their interest.
First, contrary to popular belief, academic authors do not benefit monetarily from the publishing business. Publishing houses pay them peanuts as royalty.  Concrete figures include 30,000 Rs for 3100 copies of Contemporary India that have been sold till date, which makes up 1/3rd of Satish  Deshpande’s (Head of Department Department of Sociology, Delhi School of Economics) monthly salary.
Krishna Kumar (Professor of Education, Department of Education, Delhi University; Former Director, National Council for Educational Research and Training NCERT) got a royalty of 150 Rs for his book. ‘We can’t possibly write books to make a living … It is a luxury that depends heavily on a strong public higher education system, students, and the taxation system. It is from these that we derive our salaries, our resources, our time. So please don’t speak in our names, you do not represent our interests,’ proclaimed Nivedita Menon.
‘Academic writers do not make money from publishing, we depend on public money’ Ravi Sundaram (Faculty, Senior Fellow, Centre for the Study on Developing Societies) reiterated. Revealed in their statements is the underlying irony of how the publishing houses reap their profit from a durable public network (that supports the authors), a profit that isn’t shared with the authors of the books or the larger public. The business of publishing is also glued together by a scaffold made up of academic reviewers, who basically help publicize the books, an academic readership, which basically provides the market for the books.  Hence, even as the academic community is complicit in the business of publishing, it is obvious that the publishing houses extract a greater deal from academia, in processes of production and exchange.
The present knowledge economy is steeped in the business of publishing because hierarchies of jobs and promotions depend on how much you publish, and who you publish with. Moreover, it is these publishing houses which have the discretion to ensure that a book goes out of print, thereby making it largely inaccessible.  For instance, Uma Chakravarti’s (leading historian, retired professor, Delhi University) book went out of print, and OUP refused to reprint it. In protest, she writes in the photocopied version of her book, ‘For the academic, the photocopy revolution is more important than the Neolithic revolution and the Industrial Revolution. Copyright go to hell!’ 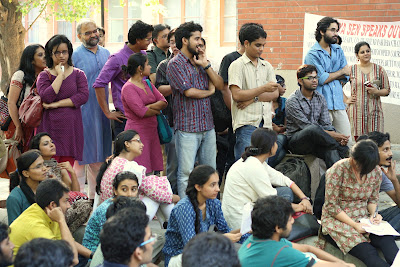 Another dimension of the insidious ways in which the publishing houses bolster their monopoly is through a legal labyrinth of property rights, that could render people defenceless, unless they look keenly into the clauses and details of the contracts they’re signing. Aditya Nigam (Faculty, Senior Fellow, Centre for the Study on Developing Societies) for instance says, OUP owns all the rights of reproduction for his book, including the rights to television.  Revealed in this, is the extent to which publishing houses are prepared to profiteer from a book.  OUP has also set up an online library, where it expects the authors to buy rights of third party citations or sections from books that they quote, posters that they show. In protest, the books have blank sections, with the writers refusing to concede to OUP demands.
What are the larger questions this legal suit raises about knowledge circulation, the implications on the access?  Ravi Sundaram (affiliation), asserted that this is a signal of a ‘permit system’ where the company becomes a ‘filter through which knowledge circulates’. Knowledge, in order to survive, to thrive, needs to move.  The legal suit reflects a kind of ‘terror, sabotage’ a backlash against the ‘democratising impetus of the photocopy’.  Similarly, Sudha Vasan (Associate Professor, Department of Sociology, Delhi School of Economics, Delhi University)) argued that the legal suit is indicative of a larger fear that propels the need for every kind of gate-keeping. It is a symptom of the historic tradition in a society where caste and gender delimit your access to knowledge.
The central question the legal suit provokes us to ask is ‘Who is afraid of more people reading?’ ID cards, library timings, girls hostel timings, are all indicators of a deeper paranoia of the spread of knowledge, that is empowering in the fact of its reception,  a fear that certain sections of society will read too much, will read things outside what is prescribed, only to ask questions that unsettle the existing state of affairs.
In the same vein,  Subhash Gatade (Author & Activist) argued, that if the OUP wins this case, there will be larger repercussions. ‘It is in compliance/collusion with the larger schemes of an India where the policy inclination is veering towards to making profits out of education.’
‘The idea of knowledge is being fundamentally transformed by this’ said Sudha Vasan.  It is embedded in an economy where quality and credibility of knowledge is reduced to points, ‘greater points are granted if you present a paper in an international conference, lesser in a national.’
Ujwal Singh (Professor, Department of Political Science, Delhi University) and Ravi Sundaram brought out the historical relationship between photocopying and knowledge sharing: ‘The photocopier has transformed the way knowledge was accessed in society, it dances at the border of a property system, without which a democratization of knowledge could not have possibly happened in our country.’
The legal suit also raises important questions on value. How do we evaluate the worth of a book? How do we measure its significance? Unanimously, the authors agreed that its meaning lay in its the readership, rather than its costs. ‘I’d rather have someone walk up to me and say she really enjoyed reading my book, rather get a royalty from it,’ said Rajni Parliwala, Professor, Sociology, Delhi School of Economics.
‘We wish that our books are photocopied innumerably, so that what we have to say is circulated and distributed. No-one wants their books to lie in the corner of a library, unread, gathering dust,’ added Sudha Vasan.
The alternatives envisaged included ‘to approach a smaller consortium of publishers to formulate a copyleft regime’ (Aditya Nigam) ‘systematize this political moment and transform it into mechanisms for knowledge to be available in the public domain’  (Ravi Sundaram). However, ‘one must be wary of the racket that open access publishing can be, where the authors and universities will pay to have their work published once reviewed by a peer review panel. This will only serve to strengthen the hierarchies of economies, where rich universities in rich countries will be able to pay, delinking knowledge from quality,’warned Nivedita Menon.
Also highlighted was the need to ‘move beyond the four corners of the law, that seek to contain intellectual property, to think subversively.. through sharing mechanisms such as Aargh.’ (Lawrence Liang, Founder, Alternative Law Forum)
The battle against copyright infringement must also be fought on the simple premise of rights, a right to access knowledge, a right for people who basically cannot afford to pay, a right to oppose another form of gate-keeping that reduces access to those cannot afford (Sudha Vasan). It isn’t even a case of a ‘mere defence, but a right and an entitlement to access educational material and protect public interest.’ (Shamnad Basheer, MHRD Professor of IP Law, WB NUJS).
Deepak Mehta (Professor of Sociology, Delhi School of Economics) asserted how his prescribed readings are only available as photocopies, they form the backbone of his classroom teaching, and the legal suit reflected ‘sheer idiocy’.
Sudhavana Deshpande, from LeftWord publishing house, argued that even in terms of a logic of recovering costs, photocopies are essential – they are a form of publicizing that then leads to people buying the book. ‘There are a huge number of publishers out there who don’t support this law suit. This law suit does not speak on behalf of all of us. 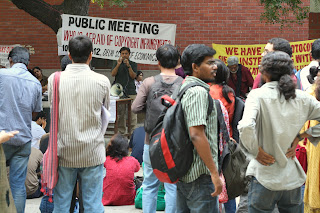 The event has earmarked the beginning of many such meetings that are to follow. The case has paved the way to draw the shadowy entanglements that make up the economy of publishing, into the public domain.