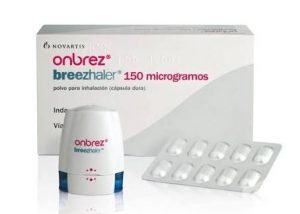 We are pleased to bring to you a guest post by our Fellowship applicant, Shweta Rankhambe. This is her first submission for the Fellowship. In this post she discusses the Delhi High Court’s recent judgment upholding an injunction order passed by the Single Judge in 2015 which temporarily restrained Cipla from manufacturing and selling a generic version of Novartis’ patented respiratory drug ‘INDACATEROL’ (sold as ‘Onbrez’). The judgment is significant in that it acknowledges ‘public interest’ as a separate factor to be considered for grant of an interim injunction, although it was found to play no role in the case. The court rejected Cipla’s ‘public interest’ argument (based upon vitality, low availability and five times more price of Novartis’ drug) seemingly for the reason that this drug is not a life saving drug (unlike an anti-cancer drug) and there are other drugs available in the market for treatment of COPD. Our earlier posts on this infringement suit can be viewed here, here and here, and those on Cipla’s perplexing plea for revocation of Novartis’ patent over the same drug that was withdrawn last year here, here and here.

Cipla’s desperate attempts at cashing in on its generic respiratory drug ‘INDAFLO’ are being severely met with Novartis’ moves to protect its patented drug, ‘INDACATEROL’.

The Delhi High Court on March 9, 2017, dismissed Cipla’s appeal against the interim order (dated 09.01.2015) granted by the Single Judge (Manmohan Singh, J.) whereby Cipla was directed not to, inter alia, use, manufacture, import, sell any pharmaceutical products etc. containing ‘INDACATEROL’ or ‘INDACATEROL Maleate’, alone or in combination with any compound which may amount to infringement of Novartis’ patent over the said drug.

‘INDACATEROL’, a bronchodilator drug approved for the treatment of chronic obstructive pulmonary disease (COPD) is protected under patent number 222346 held by Novartis. The drug is manufactured by Novartis in Switzerland and is imported into India and marketed by Lupin, under the trade name ‘ONBREZ’.

In 2004, Cipla had launched a cheaper generic version (about one-fifth of the price) of this drug under the trade name ‘UNIBREZ’, which it agreed to change to ‘INDALFO’ pursuant to a trademark infringement suit filed by Novartis. Thereafter, Novartis filed a patent infringement suit before the Del HC seeking a permanent injunction restraining Cipla from infringing its patent over ‘INDACATEROL’ along with an application seeking interim injunction against the same.

The Single Judge, on January 9, 2015, granted a temporary injunction until the determination of the compulsory license application if filed by Cipla, or until the final disposal of the patent infringement suit if such application is not filed. Aggrieved by this order, Cipla filed an appeal which was heard and dismissed by the Division Bench comprising Badar Durrez Ahmed, J. and Sanjeev Sachdeva, J. on March 9, 2017.

The Court, firstly, observed that Novartis had prima facie established validity of its patent and Cipla had not been able to make a credible challenge against it. It, thus, noted that, prima facie, Novartis was straightaway entitled to an injunction as per its exclusive rights as a patentee under S.48 of the Act.

The Court further rejected each of the following objections raised by Cipla to the order of injunction:

a. Novartis does not work the patent in India as it does not manufacture the drug in India

Cipla submitted that since Novartis did not manufacture the drug in India but only imported small quantities of it and marketed them in India through Lupin, it cannot be said to be working the patent in India and thus, is not entitled to an injunction.

The Bench rejected this argument, noting that “it is not at all necessary that for a patent to be worked in India, the product in question must be manufactured in India”. It relied upon the Telemecanique case (2002), to observe that it can be worked in India even through imports and “all that is to be seen is that the imports are of sufficient quantity so as to meet the demands for the product”, especially in the case of pharmaceutical products. However, the Court could not definitively conclude whether the quantities of imports were sufficient to meet the demand for the drug in India on the basis of the data submitted at this stage and left it to be determined during the trial.

b. Novartis’ rights under S.48 of the Patents Act are subject to S.83 of the Act

Further, Cipla contended that Novartis’ ‘exclusive right’ to prevent third parties from making, using or selling INDACATEROL under S.48 of the Act is subject to S.83 of the Patents Act. It was submitted that since S.48 begins with the words, ‘subject to other provisions of the Act’, the general principles applicable to the working of patented inventions under S.83 will impinge on the rights of patentee under S.48. It was, thus, argued that as Novartis failed to comply with the principles under S.83 by not working the patent in India, it was not entitled to the grant of injunction.

The Court rejected this argument as well, noting that S.83 itself begins with ‘without prejudice to other provisions of the Act’ and moreover, it belongs to a different Chapter of the Act titled ‘Working of the Patents, Compulsory License and Revocation’ and thus, does not impinge upon the exclusive rights granted under S. 48. It rightly observed that it is the authorities under the Act who are enjoined by the general principles laid down under S.83 in exercise of powers conferred under Chapter XVI such as grant of compulsory license etc. It accordingly concluded that “the provisions of Section 83 do not curtail or circumscribe the rights of the patentees under Section 48, except in the backdrop of compulsory licences and ancillary issues”.

c. Public interest would be disserved by grant of an injunction against Cipla’s sale of the drug

Cipla also made an argument based on the factor of ‘public interest’. Relying upon the judgment in Hoffman La Roche v. Cipla (2009), it submitted that ‘public interest’ was one of the four aspects (others being, prima facie case, balance of convenience and irreparable harm and injury) which are to be considered in the grant of an injunction. It contended that the injunction is this case would not serve public interest as the quantity of the drug imported by Novartis can meet the demand of only 4,000 of approx. 1.5 crore COPD patients in India. It also submitted that the price of Novartis’ drug was exorbitantly high (five times) compared to that of its generic version of the drug.

The Court refused to find any merit in this argument. It first observed that, “even though the question of public interest may be a factor in considering the grant of an injunction, it is only one of the factors which needs to be kept in mind”. Secondly, it noted that in any case, Cipla had not been able to establish that public interest would be disserved by the grant of an injunction in the present case. It further found that prima facie validity of patent was established by Novartis, that the balance of convenience also lay in favour of Novartis and that Novartis would also be subjected to irreparable harm in the circumstances an injunction is not granted.

The court, therefore, refused to interfere with the Single Judge’s grant of injunction and dismissed Cipla’s appeal.  This judgment marked yet another setback to Cipla’s attempt to save its generic version of Novartis’ drug.

(This is an edited version of the applicant’s post)