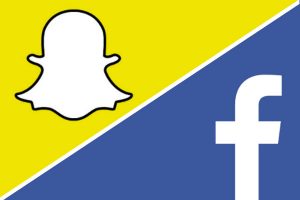 We are happy to bring to you an interesting guest post by our Fellowship applicant Sreyoshi Guha. Sreyoshi is a 4th year student at Symbiosis Law School, Pune. This is her second submission for the Fellowship.

Snapchat v. Facebook: Of Stories, Copyrights & The Idea of Expression

I’d like to believe that it all started when Snapchat did the unthinkable. A few years ago, Facebook had offered to buy Snapchat for a whopping 3 Billion Dollars, which it politely declined. Fast forward a few months and Facebook took the fight to a whole new level. Recently, both Instagram and Whatsapp launched the ‘stories’ feature, in quick succession. Before this, such a feature was unique to Snapchat (the uninitiated may go here). Let’s make a few interesting additions to this premise. One, Facebook owns both Whatsapp and Instagram. And two, there seems to be no IP violation through this action of theirs. The obvious question, then, is: How in God’s name did they pull this off – legally speaking?

A quick search of internet archives is enough to inform one of the existing speculations in this regard. It’s been said that the reason Instagram or Whatsapp could pull this off was because there was no copying of the source code. What had happened was merely a “borrowing” of an existing feature – something which happens quite often in the tech world – and doing it differently, if not better.

In trying to understand this better, I was taken back to the basics of Copyright law. We’ve heard this way too many times: copyright protects the expression, not the idea. If Snapchat were to have a case against Instagram/Whatsapp, it would have to first prove that this supposed infringement took place over copyrightable subject matter.

The American Courts make a unique distinction between the idea and expression of a computer software. Cases have confirmed that the source code and object code are protectable under copyright law. If these are copied, it would constitute copyright violation, that could effectively be challenged in a court of law. Of course, such a violation would have to be blatant and substantial – but that is a different story and for another time. The landmark case of Computer Associates International v. Altai has prescribed a three pronged test to help determine which part of the software is an idea, and which, an expression. The abstraction-filtration-comparison test envisages the breakdown of the programme’s non-literal parts into its structural constituent parts, filter each of those parts for the protectable and non-protectable material and then compare those with the ‘infringing’ computer programme.

While following the test in a case like this could be rather tedious, a possible analogy could be drawn to judicial treatment of video game piracy. This could go a long way in tackling the problems faced by social media apps. One doctrine common to video game copyright litigation is the scenes-a-faire doctrine. According to this doctrine, all the indispensable parts of  an app would become un-copyrightable subject matter. Put differently, all parts of Snapchat that are essential for a photo-sharing app like Instagram or text-messaging giant like Whatsapp, cannot be monopolized by Snapchat. The scenes-a-faire analysis would help understand if the ‘stories’ feature is so indispensable to computer apps that Snapchat cannot protect it under copyright at all. It is my opinion that application of such similar doctrines and tests would help make a wholesome analysis of the situation – wherein a social media app isn’t just a technical combination of codes and structures, but also (if not more) a tool of vibrant human expression.

When would such ‘protectable expression’ be infringed?

Continuing the video-game analogy and its application to the present situation, it is observed that the case of Atari Inc. v. North American Philips (known famously as the PACMAN case) laid down important precedent for video game piracy cases. After using the scenes-a-faire test to differentiate between protectable and non-protectable parts of the game, the Court used the ‘ordinary-observer’ test to determine infringement of copyright. This ordinary observer test in turn envisages the use of the ‘substantial similarity’ test, which proceeds on the premise that it is the similarities between the two video games that would help determine infringement, instead of the minute differences. This is an accurate recognition of the fact that video games are directed towards the layman user who would most likely undertake a holistic, prima facie analysis instead of getting down to the discernable nitty-gritties. Applying the same to ‘Snapchat Stories’ could easily tilt the scales in favour of Snapchat.

The other aspect of Copyright law that beats Snapchat at its own game is the ‘originality’ doctrine. Computer software proposes a challenge, here, that is not shared by other forms of creative output. To achieve a particular software function, there can be more than one forms of code. The originality of expression in writing code, then, is what is protected. American Courts have also confirmed that where there is only a single or few ways of coding to perform a particular function – that would usually make that ‘expression’ effectively merged with the ‘idea’, and therefore un copyrightable. While this merger doctrine is used to prevent monopolization by a particular copyright holder in the dynamic software market, the flipside, is a situation like this one: where the idea is not a particularly utilitarian one, and is, instead wonderfully unique to its own brand.

If this case were to present itself in an Indian Court, I could be rest assured that existing Indian jurisprudence is equipped to tackle the problem. While it is admittedly difficult to make a concrete prediction, it is not beyond basic speculation. For starters, it could become problematic for Facebook to defend its claim of originality as per the dictum laid down in EBC v. DB Modak. As per that case, the use of mere labour, skill and capital is not enough to make your work original. It must have an added application of a certain amount of skill and judgment to pass the test of originality. However, this ‘skill and judgment’ is purely subjective in most cases, making the potential outcome of Snapchat v. Facebook rather difficult to predict.

The dispute might also then lock horns with the idea-expression dichotomy as established by the Supreme Court in RG Anand v. Deluxe films. Following this, the hitherto mentioned merger doctrine could be applied to see if the idea and expression in the present computer programme qualify as copyright protectable subject matter. After that, the dissimilarities between the “non-literal” expressions of both the computer applications could be weighed in order to determine who would win the “Stories” battle. Precedents by both the Bombay & Karnataka High Courts could influence the application of ‘scenes-a-faire’ to this case.

Of course, the above could very well be a bridge that we cross when we come to it. And how India would determine a case like this remains to be seen. In my humble opinion, apart from being a brilliant opportunity for the IP academia, the Snapchat wars bring a deliciously strange kink in the otherwise polished armour of Intellectual Property that demands to be explored. As I sign off, though, all I can say is – this is just cruel paradox for an app that was created to celebrate expression!