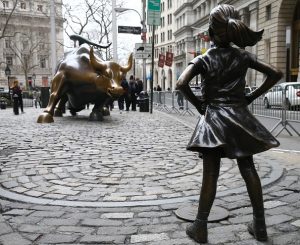 We are pleased to bring to you a two-part guest post by our Fellowship applicant Kuhuk Jain. Kuhuk is a 4th year student at National Law University, Delhi. This is her first submission for the Fellowship.

Recently, New York saw an interesting copyright controversy regarding an art work, the Fearless Girl, placed near the Wall Street in opposition to another art work, the Charging Bull.

The Charging Bull is a piece of guerilla art, placed by an Italian artist, Arturo di Modica, in front of New York Stock Exchange in the middle of the night after the 1987 stock market crash. It was intended to be a symbol of America’s financial resilience, optimism, and strength of the people during that time. The Fearless Girl is a sculpture of a girl with her hands placed on her hips. It was installed by State Street Global Advisors (SSGA) directly in front of the Charging Bull on March 7, before International Women’s Day this year. It was initially meant as an advertisement for SSGA’s SHE fund. However, eventually, this statue became a symbol of feminist strength and the possibility of gender diversity and equality in the financial sector.

While many are appreciating the Fearless Girl as being a symbol of female empowerment, Di Modica claims that this statue is violating his copyright in Charging Bull and altering the intended artistic message behind it without his permission. In light of this background, Part I of this post will analyse whether Fearless Girl violates any rights granted to Di Modica under the U.S. copyright law. Part II of the post will highlight whether the outcome of this controversy would change if this controversy had taken place in India.

The lawyers of Di Modica have, in a letter to the Mayor of New York, made two arguments. Firstly, that the statue in question constitutes a derivative workof Charging Bull since it is incomplete without it. To elaborate, the lawyers argue that the statue of the young girl becomes the “Fearless Girl” because it is placed in a way that makes it seem like she is bravely facing a giant bull that is significantly bigger in size. Additionally, just like the Charging Bull, the Fearless Girl is also made out of bronze thus making it seem like an extension to the earlier statue of the bull. Hence, it violates Di Modica’s exclusive right to prepare derivative works of his copyrighted work as granted under Section 106(2) of the U.S. Copyright Act.

Secondly, that by placing the statue in opposition to the Charging Bull, the integrity of the latter has been undermined. Di Modica claims that the placement of Fearless Girl has altered his work of art from a positive image of strength and resilience to a negative symbol of fear and threat, thus violating the integrity of his work.

Is Fearless Girl a derivative work of Charging Bull?

For the first claim to stand, the lawyers will have to show that Fearless Girl constitutes a derivative work based upon the Charging Bull. Section 101 defines a derivative work as“a work based upon one or more pre-existing works, such as a translation, musical arrangement, dramatization, fictionalization, motion picture version, sound recording, art reproduction, abridgment, condensation, or any other form in which a work may be recast, transformed, or adapted.”

To further understand what constitutes derivative work, one can refer to the recent case of Authors Guild v. Google (2d Cir. 2015), wherein it was held that:

“…this definition, while imprecise, strongly implies that derivative works over which the author of the original enjoys exclusive rights ordinarily are those that re-present the protected aspects of the original work, i.e., its expressive content, converted into an altered form, such as the conversion of a novel into a film, the translation of a writing into a different language, the reproduction of a painting in the form of a poster or post card, recreation of a cartoon character in the form of a three-dimensional plush toy, adaptation of a musical composition for different instruments, or other similar conversions.”

As we can see, in the present case, there is no “conversion” of the Charging Bull into an “altered form”. Di Modica’s mere opinion as to the Fearless Girl getting its meaning due to its placement in front of his work does not necessarily mean that it is based upon his work. Hence, the Fearless Girl cannot be said to be a derivative work.

Visual Artists Rights Act(VARA) grants the creators of “works of visual art” the rightsof attribution and integrity (17 USC 106A).However, in Phillips v Pembroke Real Estate, Inc and Kelley v Chicago Park District, it was held that the plain language of the statute did not grant protection to “site-specific art”. This is because site-specific art incorporates its surrounding into its work and one of its component physical objects is its location. Giving VARA protection to such art would go against the common law view of property as it would encumber private and public land with restrictions lasting for the lifetime of the artist.

Charging Bull, initially placed by the artist in front of the New York Stock Exchange (NYSE), was removed by the authorities. Due to public outcry, it got shifted to Bowling Green, which is two blocks from NYSE, due to the meaning it acquired of being a “Wall Street icon”. Hence, the placement of the sculpture in the financial district gave it the intended meaning of being associated with the American share market. In this context, it can be argued that Charging Bull qualifies as a site-specific work and hence not covered under VARA.

Assuming that Charging Bull qualifies as a work covered by VARA, the next step would be to analyse the scope of the right of integrity. Section 106A(a)(3)(A) states that the author shall have the right “to prevent any intentional distortion, mutilation, or other modification of that work which would be prejudicial to his or her honor or reputation.”

Hence, the question to be asked is whether, to fit within the definition of ‘distortion, mutilation, or modification’, it is enough to show a change in message/ meaning or does it require a physical alteration to the author’s work. Relying on dictionary meaning, it is generally accepted that to show distortion, mutilation, or modification to a work there needs to be some tangible alteration, which is not the case here.

Another possible argument can be that the extension of cobblestones on which Charging Bull is placed, for the purpose of placing Fearless Girl on the same base, could be said to be a physical alteration. This argument, in my opinion, would not be reasonable since Di Modica’s creation did not include the cobblestone base and the statue was placed there after it was made due to its popularity. Hence to extend protection to the cobblestone base would be preposterous.

Therefore, the chances of Di Modica succeeding on this ground are also very low.

Can Fearless Girl be excused as fair use of Charging Bull?

The First Amendment to the United States Constitution grants almost absolute protection to the freedom of speech and expression. While it creates an exception in case of copyright, the latter’s scope is limited by the doctrine of fair use.

Assuming that Fearless Girl does qualify as a derivative work, it would likely be excused as fair use (under Section 107) as all four fair use factors are likely to result in a finding of fair use in this case. Fearless Girl can reasonably be perceived as a transformative work. Even in the letter, Di Modica has claimed that the statue in question has “transformed” his work to mean something entirely different. While, the purpose was commercial, it is not harming Di Modica’s potential markets since he has expressed no intention to sell the Charging Bull. The amount of copying is negligible as the only similarity between the two works is the usage of the bronze material with which it was created. Also, in Cariou v Prince it was held that the more transformative the new work, the less will be the significance of other factors that may weigh against a finding of fair use.

On the basis of the above analysis, in my opinion, if Di Modica takes this matter to court, it is unlikely that the decision would be in his favour. The only possibility, subject to qualification for moral rights protection under VARA, can be to argue that ‘intangible’ harm would also amount to ‘distortion’ of the copyrighted work; however that also seems like a bit of a stretch.

I would like to thank my Copyrightx course classmates and Dr. Arul Scaria for the discussions on this issue.