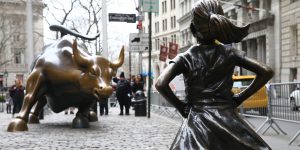 In Part I of this post, our Fellowship applicant Kuhuk Jain analysed whether the placement of Fearless Girl in opposition to Charging Bull amounts to infringement of copyright or moral rights of the latter’s creator, Arutro di Modica, under the US copyright law. In Part II, she analyses this issue under the Indian copyright law.

Would Fearless Girl amount to an adaptation of Charging Bull?

Under the Indian Copyright Act, Di Modica’s statue would constitute an artistic work giving him certain exclusive rights under Section 14(c). The right relevant to this controversy would be the copyright owner’s exclusive right to make any adaptation of his work.

For an infringement action to lie, Fearless Girl will have to fall within the definition of ‘adaptation’ in relation to an artistic work under Section 2(a).

…(ii) in relation to a literary work or an artistic work, the conversion of the work into a dramatic work by way of performance in public or otherwise…

(v) in relation to any work, any use of such work involving its re-arrangement or alteration.”

Application of Section 2(a)(ii) to this case can be out rightly rejected since creation of Fearless Girl does not in any way constitute ‘conversion’ of Charging Bull into a ‘dramatic work by way of performance’. Moreover, there is no ‘re-arrangement’ of the Charging Bull that can be said to have taken place. Thus, the first part of section 2(a)(v) would also not apply. The only way an action can lie is if Di Modica is able to show that Fearless Girl is an adaptation under the second part of Section 2(a)(v).

Section 57 of the Indian Copyright Act vests with the author certain ‘special rights’ that are much broader than the rights given under VARA. Under Section 57(1)(b), the author has the right against “any distortion, mutilation, modification or other act in relation to the said work which would be prejudicial to his honour or reputation”.

To further clarify, the explanation to Section 57(1)states that–

“Failure to display a work or to display it to the satisfaction of the author shall not be deemed to be an infringement of the rights conferred by this section.”

Hence, mere dissatisfaction of Di Modica as to the placement of the Fearless Girl in opposition to the Charging Bull would not constitute an infringement of rights under Section 57 as it would be hit by this explanation.

Therefore, if this controversy were to take place in India, the sculptor of Charging Bull might still lose a case for copyright infringement or violation of moral rights.

From a policy perspective, if intangible harm is included under right of integrity, artists will start suing curators of art in situations when they don’t like who their work is displayed next to on the ground that it changes the meaning of their art, which would not be favourable. Moreover, this analysis would also become highly subjective as it would depend on the artists’ perception of the changed meaning of their art due to placement of other art near theirs. As a result, it will become very difficult for the curators of art (such as museums) to function if such instances of intangible harm are covered under right of integrity. The courts should therefore keep in mind the policy implications incase a restrictive approach is taken.

I would like to thank my Copyrightx course classmates and Dr. Arul Scaria for the discussions on this issue.