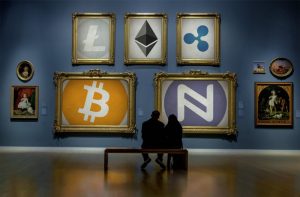 Cryptocurrency Art Gallery by Namecoin via Attribution Engine. Licensed under CC BY.

Blockchain is the buzzword among new industries looking to leverage a technology which has recently been labelled by the Harvard Business Review as a ‘foundational technology’, with ‘the potential to create new foundations for our economic and social systems.’ The music industry seems keen to put this promise to the test. Recently, three of the largest member-owned music collection societies in the world, namely the American Society for Composers, Authors and Publishers (ASCAP); the Society of Authors, Composers and Publishers of Music (SACEM); and PRS for Music have partnered to pioneer a new rights management system for musicians, which would be based on the blockchain.

Blockchain and the Music Industry

A blockchain is a form of distributed ledger technology, best known for being the foundation on which Bitcoin and similar digital currencies are based. A blockchain is essentially a records management system, in which data (the records or ‘blocks’) is distributed across a large public network. Two features in particular make blockchain a revolutionary technology – firstly, it is a distributed and decentralized system, which insulates the data from the risks that a centralized repository poses. Secondly, the blockchain is incorruptible. Transactions on the blockchain are cryptographically recorded, and provide an authentic account of any transaction at any point of time. Therefore, the provenance of each transaction can be authenticated, and any alteration without the complicity of the entire network is difficult. Both these features ensure the integrity of the data stored on the blockchain. The implications are radical – transactions on the blockchain can be independently and instantly verified without the need for a central authority (like banks or stock brokers), and solves a fundamental problem of trust between transacting parties.

For the most part, copyright in a sound recording primarily comprises two distinct rights – the right in the musical composition, which vests in the arranger or composer of the musical work and lyrics, and the right in the sound recording, which is the copyright in a particular recording of the musical composition, which typically vests in the record companies that produce the recording. These distinct rights are often held by different entities, depending on specific assignments and licensing contracts. Moreover, there may be multiple creators in respect of either the composition or the sound recording. These rights, in turn, comprise bundles of rights for copying, distribution and public performance. Managing the complexity involved in untangling this web of rights in each song is usually the responsibility of collective rights societies. In India, for example, the Indian Performing Rights Society (IPRS) and the Phonographic Performance Ltd. (PPL), are copyright societies (though this is contentious) statutorily vested with the right to manage the administration of copyright in musical works and sound recordings, respectively. The copyright societies play an important role in ensuring that creativity is incentivized by making sure that artists are adequately compensated for the use of their work. This, in effect, means keeping track of every song that is licensed by their members, including when and by whom it is played, collecting the royalty payments and distributing them across the rights holders.

The Attribution Problem In Digital Music Distribution, and the Endless Possibilities of Blockchain Applications

Even as digital music service providers like Saavn and Spotify have proliferated and provided innovative models for the music distribution, tracking the rights in each song as well as the royalty payments has not gotten easier. This creates a situation where music streaming services are unable to trace the appropriate creator of a song, and therefore unable to use the copyrighted work or pay royalty on the same. While this problem can be avoided when licensing from large record labels and publishers, it is exacerbated where independent artists are concerned.

This problem of attribution is what ASCAP, SACEM and PRS hope to solve. According to a press release, these societies aim to use blockchain technology, specifically the open source hyperledger protocols, to manage the links between sound recordings International Standard Recording Codes (ISRCs) and music work International Standard Work Codes (ISWCs). These codes provide standards for incorporating metadata within songs, which is a crucial step towards identification of songs for the purposes of tracking. A similar system is also being developed by Spotify, after its acquisition of the blockchain technology firm Mediachain. While the exact mechanism which they propose to utilize is unclear, some hypothetical models are described below:

The blockchain could be used to create a decentralized repository of the rights information about every song which is licensed by a copyright society or societies. This rights information would also link each sound recording to its underlying musical composition, which can be stored on the blockchain each time a song is used by a digital music service provider, to verifiably identify both the original sound recording as well as the musical work. Every time a online music service provider wishes to license the song and/or identify the person to whom royalties should be paid, it can refer to this authoritative database. Initiatives to create such a database already exist, such as singer Imogen Heap’s company, Mycelia.

Potentially, the blockchain can also be used to write self-executing contracts or ‘smart contracts’, which automatically allow listeners to pay the creators as per the information and the terms encoded on the blockchain, without any third party intermediation. This could potentially also help comply with statutory directives such as the norm in India, where underlying composers have to be paid an equal share in the royalties for exploitations outside standard mediums, by including the payment of royalties as per the statutory provisions as a necessary condition for the use of the songs.

While it’s nice to dream of a techno-utopian world without an oligopolistic recording industry and publishing houses, free from the mismanagement of royalties by copyright societies, it must be kept in mind that blockchain technology is at a nascent stage, and a lot of the applications of the technology are currently speculative. However, if this technology does manage to take off, it can have the potential to rewrite how the music industry functions – the massive decentralization made possible by the blockchain could connect artists with consumers without intermediation by publishing houses, records industries or copyright societies. This could, indeed, be the foundational technology for a new kind of music industry.

[Post Script: The image has been taken from the Mediachain Attribution Engine, which uses data from blockchain applications to trace the source for images for proper attribution (similar to the blockchain system for music described in my piece). It is available currently for openly licensed images (licensed through Copyright Commons) which allows attribution for each photo on its repository. The engine also allows reverse searching images which it stores, allowing you to look up the proper author of any image you may wish to use, as long as it is indexed. More information on the engine is available here.]

How Blockchains Can Support, Complement, Or Supplement Intellectual Property, Coalition of Automated Legal Applications (May 2016)