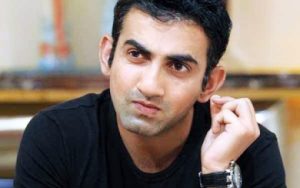 In what could be an interesting publicity rights case, ace cricketer Gautam Gambhir has taken a Delhi based restaurateur to Court for unauthorized use of his name in the tagline of his pubs. The twist is…the hotelier is named Gautam Gambhir too!

Gautam Gambhir discovered that two pubs in Delhi, ‘Hawalat’ and ‘Ghungroo’, were using the tag line ‘by Gautam Gambhir’, which was causing confusion among his fans.  A teetotaler himself, he was distressed at this ‘false association’ caused by the tagline and claimed that his name had been used without his consent in a way that can prejudice his image.

On the other hand, the proprietor has claimed that the tagline refers to his name, which is also Gautam Gambhir;  and that his restaurants, neither by name nor by ambiance, use any cricket lingo, symbolism or images to create the ‘false association’ being alleged. Arguing that he has a right to use his name for his ventures, he has denied the allegations of the Cricketer.  He further added that he has run a resto-bar called ‘Blu Wavs’ with the same tagline for years, and no such claims have been made in the past.

The Cricketer claimed that due to his reputation and ‘immense’ recognition accorded to him, his name has attained a ‘distinctive and peculiar indicia of its own’, leading to an immediate association of his persona with the name. He further added that by using his name in a commercial venture, the restaurateur has exploited the value of the name as the public identifies every activity in such a venture with the cricketer. He furnished comments on social media, including tweets, as evidence of the confusion caused by the tagline. Based on this, he requested the Court to restrain the proprietor, DAP & Co., from using the tagline.

Publicity rights as a sphere in itself in India’s IP Law is still in its nascent stage of development, covered extensively by us here, here and here. Publicity rights were recognized in Indian jurisprudence by the Delhi High Court in ICC Development (International) v. Arvee Enterprises, the judgment states-

The justification of publicity rights rests in the value afforded to the reputation and goodwill of the celebrity. As the fruit of labor of the holder, only he/she should have the sole right to use it commercially in a manner they consider suitable a la Locke’s labor theory.

The two pronged test for determining the liability for infringement of publicity rights was laid down in Titan Industries Ltd Vs. Ramkumar Jewellers, which stated-

Identifiability: The Celebrity must be identifiable from defendant’s unauthorized use. Infringement of right of publicity requires no proof of falsity, confusion, or deception, especially when the celebrity is identifiable. The right of publicity extends beyond the traditional limits of false advertising laws.”

This was recently followed in the famous case filed by Rajnikanth against the film ‘Mai Hoon Rajnikanth’ in which the director had not only used Rajnikanth’s name without prior permission, but also his style/ caricature and image. The relevant paragraph enunciates-

“In Titan Industries Ltd Vs. Ramkumar Jewellers it has been observed that ‘No one was free to trade on another’s name or appearance and claim immunity’…In the instant case, on seeing the title of the impugned movie, it could be easily inferred that the public perspective about the impugned movie appears to be only with reference to the plaintiff herein alone and not connected to any other person…”

“The defendant has deliberately used the plaintiff’s name/image/caricature/style of delivering dialogues in its forthcoming feature film only with a mala fide intention to derive illicit benefits based upon the goodwill emanating from the well known personality status of the plaintiff.”

This was referred to as the infringer’s ‘intention’ or ‘state of mind’ in Titan, listed as one way of determining ‘identifiability’.

As a plain reading of the above cases would indicate, there are two factors that have to be proved by the Cricketer to succeed (a) validity and (b) identifiability.
Though the first criterion stands proved as he does own a right in his name which, he alleges, is being used by the proprietor, difficulties arise in fulfilling the second criterion.

Identifiability requires that the celebrity must be identifiable from the defendant’s unauthorized use. This can be presumed from the evidence of the infringer’s intent to trade upon the identity of the plaintiff or from some comparison of the infringer’s use and the plaintiff’s identifying features. This was obvious in the Titan case as the infringing posters bore pictures of Amitabh Bachchan and Jaya Bachchan. Similarly, in the Rajnikanth case, the name, style and image of the South Indian Superstar was very evidently being used mala fide to illicitly exploit his popularity and cultural image. In both the cases, the intent of the infringer or the mala fide usage of the name/image/ style was prima facie determinable.

In the present scenario, though it is undeniable that the cricketer Gautam Gambhir has a massive fan following and international repute; it is not equally simple to show that the proprietor intended to or traded on this reputation or that it was definitely him the proprietor had represented in the tagline. As stated by the restaurateur himself, he never claimed that these pubs were owned by the cricketer or associated with him in any manner, and no symbols, image etc. of him or cricket were used to either promote his pub or formed a part of the ambience. Most importantly, he too has a bona fide right to use the name ‘Gautam Gambhir’ for his ventures, since his own is the same.

A similar scenario came before WIPO, where Armani sued A.R Mani, an artist, for registering the domain name “armani.com” and thus infringing its rights. The Panel held that though Armani was a well known trademark, this was not enough to show the existence of a right over the domain or its infringement. The Panel held that A.R Mani had a legitimate interest in the domain name owing to his own name and previous use, which Armani had failed to falsify, ruling against the Brand.

Similarly, no doubt that many associate the name Gautam Gambhir with the famous cricketer, but that in itself will not be enough to prove an infringement of publicity rights; the proprietor too has a bona fide claim to use his own name to promote his ventures, which unless falsified, stands as a defense to the Cricketer’s allegation.

The order can be read here-Gautam Gambhir Order