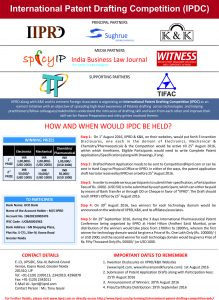 We are pleased to announce that the Institute of Intellectual Property Research and Development (IIPRD), along with Khurana & Khurana, Advocates and IP Attorneys (K&K) is organizing the Third International Patent Drafting Competition (IPDC) from August 1 to August 20, 2017. SpicyIP readers interested in participating can enjoy a discount of 50% on the participation fee. They’ll be required to pay only INR 500 instead of INR 1000. For further details, please read the post below:

IIPRD, along with Khurana & Khurana, Advocates and IP Attorneys (K&K) and its eminent foreign associates, Sughrue Mion, TIFAC, PAAI, SpicyIP, IBLJ and Lex Witness, is organizing its Third International Patent Drafting Competition (IPDC) as an earnest initiative with a sincere objective of spreading awareness of patent drafting as a skill across technology domains, and for helping practitioners, colleagues, and stakeholders understand various intricacies of patent drafting as a skill and learn from each other as to nitty-gritties involved therein.

Step 1: On 1st August 2017, IIPRD and K&K, on their websites (www.iiprd.com and www.khuranaandkhurana.com), would put forth Three Invention Disclosures (describing three inventions), one each in the domain of Electronics/ Hi-Tech, Mechanical, and Chemistry/Pharmaceuticals. The Competition would be active till 20th August 2017, within which timeframe, participants would need to write complete Patent Applications/Specifications (along with Drawings, if any).

Step 2: Drafted Patent Application can be sent to [email protected] or can be sent in hard copy to IIPRD’s, Greater Noida Office. In either way, drafted patent applications should be received by IIPRD on or before 20th August 2017.

Step 3: In order to enable serious participants to submit their specification, a small participation fee of INR 1000 (USD 50) is to be submitted by each participant, which can either be paid by means of bank transfer or though a DD or a cheque in favor of “IIPRD”. SpicyIP readers interested in participating are required to submit a fee of only INR 500 instead of INR 1000. The draft should reach IIPRD’s Office by 20th August 2017.

Step 1: On 1st September 2017, two winners for each technology domain would be announced on the websites of IIPRD and K&K.

Any practitioner having a Technical/Science Background is eligible to participate in the competition. For instance, the participant could be a student, a practicing attorney, an in-house counsel, a scientist, a faculty member, or any other stakeholder having a technical qualification.