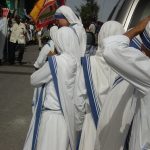 I do not intend to elaborate on the news reports. The reports are freely available online and elsewhere. I am quite doubtful on the strength of this trademark for the reasons mentioned below. Note that, at this juncture, with limited first-hand information, I can only make conjectures. I am yet to obtain the Trade Mark number and other details.

Firstly, I am not sure on the “distinctiveness” factor. Since childhood, I have personally seen many grandmothers and charity organizations using blue striped white cotton sarees. It is not a rarity.

Secondly, as evident from the definition, there should be a “connection in the course of trade”. Trade has not been defined in the General Clauses Act. In the context of Article 19(1)(g), the Supreme Court in Sodan Singh v. New Delhi Municipal Committee (AIR 1989 SC 1988), defined the four expressions viz., “profession”, “occupation”, “trade” or “business” as follows – “Profession means an occupation carried on by a person by virtue of his personal and specialised qualifications, training or skill. The word ‘occupation’ has a wide meaning such as any regular work, profession, job, principal activity, employment, business or a calling in which an individual is engaged. Trade in its wider sense includes any bargain or sale, any occupation or business carried on for subsistence or profit, it is an act of buying and selling of goods and services. If may include any business carried on with a view to profit whether manual or mercantile. “Business” is a very wide term and would include anything which occupies the time, attention and labour of a man for the purpose of profit. It may include in its form trade, profession, industrial and commercial operations, purchase and sale of goods and would include anything which is an occupation as distinguished from pleasure.” As evident from this definition, the ambit of “trade” is quite wide. Profit motive is not a sine qua non so as to constitute “trade”. Thus, logically, charitable organisations can engage in “trade”.

Set in this context, I am unaware as to the “trade” in which Missionaries of Charity is involved. If they are not involved in a “trade” or not going to get involved in a “trade”, the question of trademark doesn’t even arise. Note that the definition has laid down prerequisites quite clearly.

Trademark is not just a negative right

The right of trademark is not just a negative right. It is also a positive right. Of course, it gives the right to exclude others from using the mark in respect of goods and/or services for which the mark is registered. At the same time, it gives a positive right to use the trademark in respect of goods and/or services for which the trademark is registered. In the instant case, as stated earlier, I am unaware of the venues through which this positive right has been exercised /  is to be exercised. Use of trademark is a prerequisite so as to continue enjoying the status of a trademark holder. In this regard, Section 47 of Trade Marks Act, 1999 may be noted:

[47. Removal from register and imposition of limitations on ground of non-use.—

(a) that the trade mark was registered without any bona fide intention on the part of the applicant for registration that it should be used in relation to those goods or services by him or, in a case to which the provisions of section 46 apply, by the company concerned or the registered user, as the case may be, and that there has, in fact, been no bona fide use of the trade mark in relation to those goods or services by any proprietor thereof for the time being up to a date three months before the date of the application; or

(b) that up to a date three months before the date of the application, a continuous period of five years from the date on which the trade mark is actually entered in the register or longer had elapsed during which the trade mark was registered and during which there was no bona fide use thereof in relation to those goods or services by any proprietor thereof for the time being:

(b) a person has been permitted under section 12 to register an identical or nearly resembling trade mark in respect of those goods, under a registration extending to use in relation to goods to be so sold, or otherwise traded in, or in relation to goods to be so exported, or in relation to services for use or available for acceptance in that place or for use in that country, or the tribunal is of opinion that he might properly be permitted so to register such a trade mark, on application by that person in the prescribed manner to the Appellate Board or to the Registrar, the tribunal may impose on the registration of the first-mentioned trade mark such limitations as it thinks proper for securing that that registration shall cease to extend to such use.

(3) An applicant shall not be entitled to rely for the purpose of clause (b) of sub-section (1) or for the purposes of sub-section (2) on any non-use of a trade mark which is shown to have been due to special circumstances in the trade, which includes restrictions on the use of the trade mark in India imposed by any law or regulation and not to any intention to abandon or not to use the trade mark in relation to the goods or services to which the application relates.]

On right to exclude

The news reports seem to suggest that the mark gives the Missionaries of Charity the right to totally exclude others from using the saree pattern. This is not the correct proposition of law. The right to exclude is limited to the classes for which trademark has been granted. Say, for instance, the mark is granted for “education” (Class 41). The mark holder has the right to exclude others from using the mark vis-à-vis “education” only. The mark holder doesn’t have the right vis-à-vis other Classes, for instance, medical services (Class 44). [I am not considering trademark dilution here.]

If the intention of the trademark holder is to prevent misuse alone, the remedy lies elsewhere and not in Trade Marks Act, 1999. As I don’t have all the facts, I can make only conjectures. And those conjectures, for the reasons mentioned above, are in favour of doubting the strength of this mark.If my conjectures are, in fact, correct, then the mark is a fit case for challenge and more importantly, shouldn’t have been granted in the first instance.