“What’s in a name? That which we call a rose by any other name would smell as sweet” 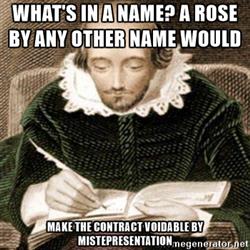 Sorry Willy, but they didn’t have Trademark Law when you were around (At least in its modern sense. A generic use of a TM as an “indicator of goods” was used by the Japanese: It was codified in the Taihō-ritsuryō as early as 701 A.D. The Egyptians used a source identifying system as early as 232 BC!). In Trademark Law, maintaining a unique identity is paramount: words which are used as surrogates for each other in ordinary parlance might represent two rival companies/source identifiers in the Trademark realm. Therefore, when companies are set up, they want to choose a name which is snazzy and trademark-able in equal proportions, a name that resonates with the vox populi and the Trademark authorities alike.  It is therefore not surprising that companies receive “generic” ( See what I did there) legal advice from firms when they wish to christen their company, usually advising them to choose a name that will not only withstand initial inspection, but also long-term scrutiny. The run of the mill advice is to make sure a name chosen is “distinctive or arbitrary” and not “merely descriptive”, or the black sheep of trademark families, “generic”. Although this longstanding wisdom regarding the distinctiveness spectrum is not being challenged, the question of “What constitutes a good trademark” is, and vigorously so.

Don’t believe me? Alright, I will put forth two trademarks, and you tell me whether both of them, one of them, or none of them constitute a “good trademark”. Ready? Exhibit 1: ‘Nirbhaya buses’, a fictional company established in the aftermath of the gruesome incident in Delhi, which runs hourly shuttle buses for women alone, driven by women drivers at a concessional rate, and Exhibit 2: ‘Nirbhaya rods’, a (thankfully) fictional company established in the aftermath of the gruesome incident in Delhi, which manufactures metallic rods. At first glance, we are tempted to shred the latter’s Trademark application, and send the proprietors to purgatory for even suggesting such a vile name, but put your moral convictions aside for a second ( Just a second I promise). Both these trademarks are legally tenable aren’t they? Nirbhaya seems like a random name, in vacuum, that can be used to denote a particular good or service. When looked at through a morally neutral lens, the trademarks seem fanciful, possibly suggestive but certainly land on the distinctive side of the spectrum, as opposed to the generic flank. However, I think we can both agree that such a nauseating, repellant trademark should never be granted. Are we both guilty of viewpoint discrimination here? Pardon the french, but damn right we are! A trademark like ‘Nirbhaya rods’ evokes a certain visceral reaction in us, a TM that reaches deep inside us and elicits a sense of repugnance. Nirbhaya rods might still constitute a “good trademark” in the sense that it is legally tenable, and is attractive to a segment of the population (notwithstanding the fact that the segment of the population is probably psychopaths and rapists), but it certainly shouldn’t be considered a “good trademark” in the philosophical sense of the word ‘good’. Neither should it by any stretch of imagination be granted if an application is made for registration. Right?

Well, the US Supreme Court recently slanted in a possibly-maybe-not quite sure-could be different direction. In the ‘Slants Case’( Matal v. Tam) , that Divij covered extensively here, the US Supreme Court struck down “disparaging marks” as being violative of the free speech clause in the Constitution. The Court went on to state that the ‘public expression of ideas may not be prohibited merely because the ideas are themselves offensive to some of their hearers’, and that the government ‘cannot single out a subset of messages for disfavor on the basis of the views expressed’. As Divij rightly notes however, “While Matal was an ‘easy’ case, one where the mark sought to be registered was not one expressly aimed at offending or being discriminatory, a similar finding on marks like the Redskins’ would be more difficult to digest.” So until the U.S Supreme Court, or more importantly the Indian Supreme Court gives us a clearer view on ‘immoral’ as opposed to ‘disparaging’ marks, I continue with my good trademark crusade.

Therefore, I posit that the elusive “good trademark” consists of two separate phases of analysis. The first, is a broader one, whereby we check whether the trademark at hand is situated in the legally desired zone of arbitrariness, or the unacceptable generic sector of descriptiveness. The second, is far more challenging: once we determine that the trademark is legally valid, within the microcosm of distinctiveness, the analysis that needs to be conducted assumes a philosophical hue. Depending on the definition of “good”, we need to determine whether the Trademark passes not only the legal but also the moral rubric established in society. In other words, notoriety cannot be superimposed on rarity to receive a trademark registration.

For all you logic fanatics out there reading this and shaking your head vigorously, I see you. I hear you accusing me of using reductio ad absurdum, to show that if a second layer of analysis to determine whether a trademark is morally viable is not attached, it would result in abominable trademarks populating the marketplace, and that such analysis strawmans the viewpoint discrimination argument. Additionally, the entire argument is anecdotal, because ‘Nirbhaya rods’ is something that is universally despised. Fair enough. The true test would be for Trademarks stuck in moral purgatory, like the Washington Redskins case. In addition to this, you might say that even if you agree that determining what constitutes a good trademark is a 2 tier process, determining what constitutes “moral good” is a question that has troubled polymaths from time immemorial. It is a normative question that truly has no answer (Unless you think the answer is 42. Then it is definitely 42.)

Self-love is a good thing but self-awareness is more important.

I plead guilty to these self-imposed, yet prescient criticisms. Maybe determining what constitutes a “good trademark” is an unnecessary task. Like I alluded to in my earlier post on opportunistic trademark filings here, maybe the market vis-à-vis the consumers will shun such morally reprehensible Trademarks, and companies which engage in such blatant maliciousness will go out of business. Think about it, isn’t this precisely how IP works? Markets decide which invention is successful, which song is a hit, and whether we prefer gory greeting cards, or ones with puppies on them. The problem however, is that as James Boyle says “The system that was supposed to harness the genius of both the market and democracy sometimes subverts both”. Irrespective, if you think that the market alone is the solution, you are certainly more trusting than I am in the power of the consumer and collective consciousness of the public. (Especially in this age of bigoted demagogues aka Donald Trump.)

In part 2 of this post, the titling of this post will be explained and you’ll realize like I did, that sometimes fact is stranger than fiction.