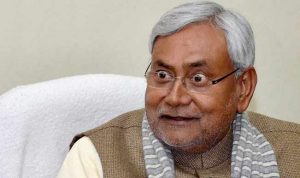 Even he did not see that one coming

While Nitish Kumar has got away with the wiliest of political manoeuvring in the recent past, the Delhi High Court has caught him off-guard with a move of its own. In its order dated August 2, 2017, the Delhi High Court has imposed cost of Rs.20,000 on  the Bihar Chief Minister for filing a frivolous application in a copyright infringement suit. The interlocutory application by Nitish Kumar under Order I Rule 10(2) of the Code of Civil Procedure, 1908, seeking to strike off his name from the array of Defendants, was preferred in a copyright infringement suit filed by one Mr. Atul Kumar Singh (“Plaintiff”). The Plaintiff in its suit alleged that Nitish Kumar, along with Asian Development Research Institute and Centre for Economic Policy and Public Finance, had plagiarized his doctoral research paper titled “Special Category Status: A Case for Bihar” and brought out a book by the same name without his permission.

At first blush, it would appear that Nitish Kumar was arraigned as one of the Defendants (in fact as Defendant No.1 in the suit), solely on the basis that he had endorsed the publication of the book by ADRI and Centre for Economic Policy and Public Finance. Nevertheless, on a closer reading, it appears that Plaintiff has made specific averments to the effect that Nitish Kumar was the principal actor among the Defendants, as he had not only endorsed the publication of the book, but had also given interviews stating that the book had been authored by him. Although Nitish Kumar went on to argue that he was neither a necessary nor a proper party to the suit as no relief was claimed as against him and his name was added only with a mala fide intention to cause embarrassment to him, the Court, after examining the sufficiency of the materials placed on record by the Plaintiff, concluded that the presence of Defendant No.1 was necessary for the complete adjudication of the suit. Moreover, the Court seemed convinced with the Plaintiff’s contention that the need for arraigning Defendant No.1 as a party can only be determined after the completion of trial. More importantly, the imposition of such heavy costs by the Court seems to have been prompted by the fact that the instant interlocutory application was filed at an advanced stage of the suit, i.e., when it was posted for evidence. The Court while finally disposing off the interlocutory application, termed it a “sheer abuse of process of law” before going on to impose a sum of Rs.20,000 as costs.

While it is indeed heartening to see the Indian Courts coming down heavily on such frivolous attempts to prolong litigations, it is noteworthy that a few crucial recommendations submitted by the Law Commission of India by way of its 240th report on ‘Costs in Civil Litigation’ are yet to be brought into effect. The report is an interesting read and in fact throws light into why the Indian judiciary has its hands tied on imposing costs, which could otherwise act as an effective deterrent to those who bring about frivolous litigation and adopt dilatory tactics.

Also, those of you who are interested, may refer to Chapter XXIII of the Delhi High Court (Original Side) Rules, 1967  along with the Schedule to know more about the source of the power exercised by the Court in the instant matter to impose costs and the extent to which the Delhi High Court is generally empowered to impose costs while exercising its original jurisdiction.