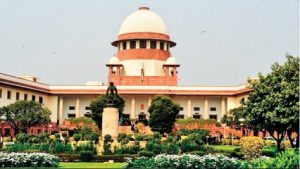 We are pleased to bring to you a guest post by Jaideep Reddy on the ongoing SC case on right to privacy. Jaideep is a technology lawyer at Nishith Desai Associates. The views expressed in this post are personal. We had earlier published a few snippets of an article co-authored by him on problems of delegated legislation/executive action here.

Next week, the Supreme Court is expected to answer the question that just raged before it: “Is privacy a fundamental right?” The question justifiably troubled the court and the general public. This is largely because of the fluidity of the term ‘privacy’.

Because privacy is so hard to define, this question is leading to divisive views between so-called ‘pro-privacy’ and ‘anti-privacy’ voices. The former worry that rejecting ‘privacy’ as a fundamental right in 2017 would lead to unfettered government power over the private realm and to corporate misuse of personal data. The latter are concerned that an affirmative answer to the question would lead to government schemes and internet innovation becoming unfeasible, owing to potential constitutional challenges on privacy grounds.

They are both right. The question posed to the nine-judge bench would be badly served with a yes-or-no approach. This piece argues that the semantics of the discussion present a more confrontational picture than necessary, and that reasonable minds on both sides acknowledge that privacy interests exist – and must exist – under the Constitution, with due limitations.

Let’s see what the court is actually considering, in its own words. Its 18 July 2017 order reads: “During the course of the hearing today, it seems that it has become essential for us to determine whether there is any fundamental right of privacy under the Indian Constitution. The determination of this question would essentially entail whether the decision recorded by this Court in M.P. Sharma and Ors. vs. Satish Chandra, District Magistrate, Delhi and Ors. – 1950 SCR 1077 by an eight-Judge Constitution Bench, and also, in Kharak Singh vs. The State of U.P. and Ors. – 1962 (1) SCR 332 by a six-Judge Constitution Bench, that there is no such fundamental right, is the correct expression of the constitutional position.”

The two cases cited to say “there is no such fundamental right” in fact do not dismiss the idea of certain privacy interests existing in the Constitution.

First, M.P. Sharma did not consider the constitutional provisions being asserted today in favour of privacy interests under the Constitution. Rather, it ruled on the basis of the right against self-incrimination and the fundamental right to property (the latter is now deleted). The petitioners in the current case, on the other hand, argue for privacy interests primarily under Article 21 (right to life and personal liberty).

Second, Kharak Singh did find privacy interests under Article 21, observing that the maxim “every man’s house is his castle” “embodies an abiding principle – which transcends mere protection of property rights and expounds a concept of ‘personal liberty’” under Article 21. It held a police regulation providing for the shadowing of history-sheeters unconstitutional on this basis.

Since Kharak Singh, the Supreme Court has found a variety of privacy interests under the Constitution, including limitations on physical and electronic surveillance, on compelled forensic tests, on the disclosure of sensitive medical information, and on the publication of non-public personal details without consent. (Note that a five-judge bench of the court is also considering the question of individuals’ rights over their online personal data in the Karmanya Singh Sareen / ‘Whatsapp case’.)

The respondents before the nine-judge bench i.e., those arguing against a fundamental right to privacy, also acknowledge that there are privacy interests under the existing Articles of the Constitution, and that these are subject to constitutional limitations. What they argue against is the reading in of a distinct fundamental right of ‘privacy’ into the Constitution, since they are concerned about its overbroad implications.

This is where semantics create unnecessary difficulties. It is difficult for the court ruling on a purely abstract question of law like this (usually, courts apply law to a given set of facts) not to answer it without leaving room for unintended interpretations.

When presented a given set of facts, however, courts will likely not find the issue as troubling. They will interpret the relevant Articles (e.g., 19 and/or 21) in line with their long-established jurisprudence. The fundamental freedoms under Article 19 like the freedom of speech and expression and the right to free movement are subject to “reasonable restrictions”, and the right to “life and personal liberty” under Article 21 can only be taken away by “procedure established by law” that is “fair, just and reasonable”.

A good way to look at privacy interests under the Constitution is to draw a parallel with free speech. The right to free speech is a fundamental right but the State can still lawfully restrict hate speech and obscenity. Similarly, the privacy interests that exist under Articles 19 and 21 will be subject to the limitations of reasonableness that inhere in those Articles.

An Opportunity for Guidance

But merely acknowledging the existing position may be a missed opportunity, given the strength of the bench and the age we are in. Faced with technologies like facial recognition (potentially stripping away privacy on the street), camera-enabled drones and eyeglasses (allowing for surreptitious recording), “always-on” Internet of Things devices (that continuously record sounds or images in the home), and unsupervised machine learning (where even the data processors cannot exactly say how the data is being used), the court has the opportunity to issue guidance on what types of actions will infringe the privacy interests that inhere in the fundamental rights.

It has been reported that the court is considering defining three “zones” of privacy: the intimate, the private, and the public, in decreasing order of the strength of the privacy interest. It might be difficult for the court to lay down a mini-handbook on privacy law, with two weeks of hearing, without leaving room for conflicting interpretations. The interests of both sides might be better served if the court narrates some uncontroversial examples of how constitutional privacy interests could be infringed, and then leaves it to itself and lower courts to apply existing jurisprudence on a case-to-case basis. This is indeed how the law of free speech has developed. No single bench has or could have laid down a Bible of free speech law.

So, regardless of how the court semantically answers the question before it, the conclusion that the Constitution supports a variety of privacy interests seems inescapable. It is equally inescapable that these privacy interests will be subject to the same long-established limitations and canons of interpretation that apply to the fundamental rights they attach to. This is a position both sides largely accept, and the court would do well to look past the semantics to arrive at it.