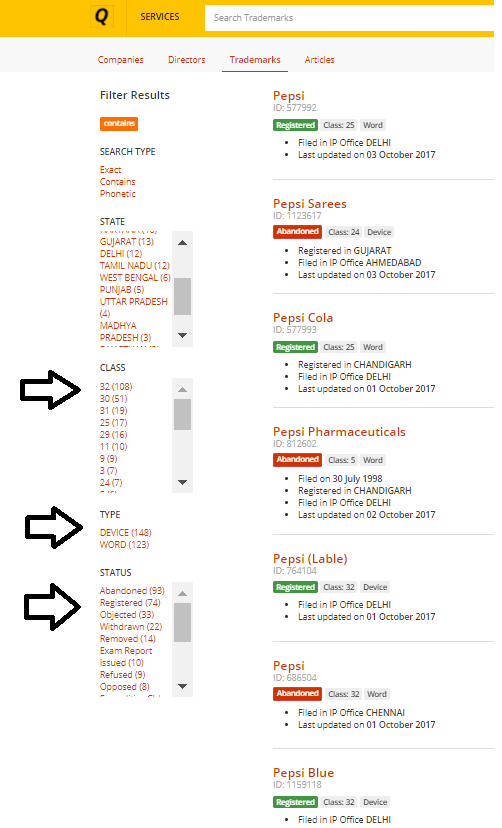 It gives me great pleasure to introduce Quickcompany.in to our readers.  Quickcompany is the first company I know that provides data based trademark and company related services in India.  Let me explain more: Quickcompany has managed to recreate almost the entire Indian trademark related data by using various techniques – some of these techniques involved putting multiple teams of people to manually download vast amounts of data.  Other’s involve creation of proprietary algorithms working on server based systems to fetch somewhat very data.   The result is that it has the most complete data set (after ipindia) for trademarks.  Newer TM journals have been digitized and linked to the mark / application.  One can view TM applications by state filings, and status.  Multi-class search was never easier.

One can also do a (free) TM search on spicyip.com directly.  Go ahead try it out – I am sure you will be surprised by the data and the way it is presented to users.  Quickcompany also plans to provide older TMs journals that are web based and searchable.  Similarly, these folks plan to make reverse image search also possible – these and many more features are in the pipeline and should be available soon.  Quite a few features including multi-class search etc. are free!  A detailed search can also be done at Quickcompany Tm Search.

Quickcompany has also analyzed TM data for the past few years and have come up with interesting results.  The results below are compiled based on data created till July 2017.  Please note that the data is not 100% complete.  Hence Quickcompany takes no responsibility about the completeness of data.  Ipindia is the most complete available data source repository.

#Key Highlights of the current year 2017

A marginal rise was witnessed first in 2010, after that the filing of the trademark applications continued to be more or less constant.

A stark increase was witnessed in 2015 (perhaps effect of Madrid). There was a direct jump by almost 81,038 applications.  ince 2015 an increasing trend has been witnessed. In the current calendar year of 2017, it’s just been seven months and there have been 113892 trademark applications filed.

In my view, the figure should rise significantly for 2017 given the large recruitment drive initiated by the IP Office.

# User preference: Device or Word mark or any other?

Device marks are the preferred choice for proprietors: 57.9% versus 41.8% for word marks.  The remainder 0.3% is distributed amongst all other types taken together. 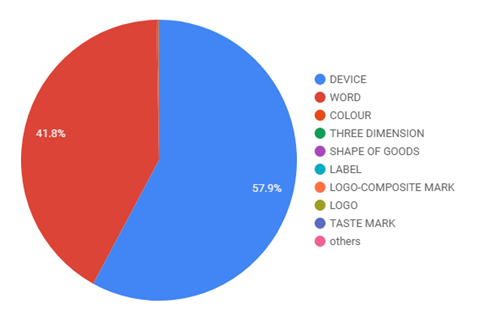 A Trademark application once filed with the registrar goes through different stages. Each stage is accorded with a status. We have the following statuses: 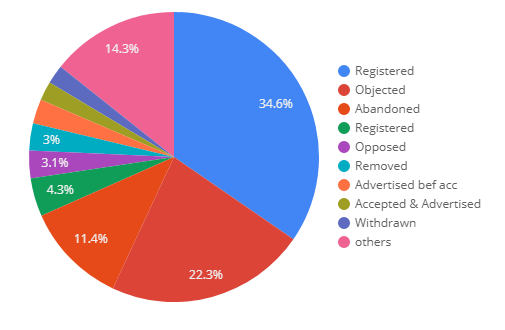