On August 22, 2017, the Supreme Court brought to a conclusion a long-running dispute between Prasar Bharti, and the BCCI and its licensees on the issue of re-transmission of live feeds of cricket matches. In Part I of this two-part post, I discuss the legal framework that applies, and the background in which the dispute arose. In Part II, I examine the Supreme Court’s decision. 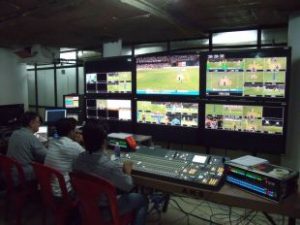 India’s multi-billion dollar cricket industry thrives primarily on the advertisement revenue it rakes in from the live telecast of cricket matches. For the Board of Control for Cricket in India (BCCI), media rights management to maximize this revenue source is accordingly crucial. The tussle between this right to maximise private profits and the right of the public to have access to important national sports events is at the heart of the recently resolved dispute between the Union of India and Prasar Bharti (and other public spirited bodies) on one side, and the BCCI (and its licensees) on the other.

The second statute is the Cable Television Networks (Regulation) Act, 1995 [‘Cable Act, 1995’]. The reason for the introduction of the act was to regulate cable television networks, which had started to proliferate in the mid-90s. Section 8 of this act effectively protects Prasar Bharti by requiring all cable networks to run certain Doordarshan channels, as and when they were notified. This power to notify was, by way of a 2011 amendment, placed in the hands of the Central Government.

The third, and most recent, act is the Sports Broadcasting Signals (Mandatory Sharing with Prasar Bharati) Act, 2007 [‘Sports Act, 2007’] (discussed previously here and here on this blog). The purported object of the act is to ensure that the largest possible number of listeners and viewers in India had free access to “sporting events of national importance”. Section 3 of this act requires broadcasters of sporting events of national importance to share the live broadcasting signal with Prasar Bharti for retransmission on “its terrestrial networks and Direct-to-Home networks”. Section 3(2) distributes the revenue received from this retransmission in a 75:25 ratio in favour of the original broadcaster. Section 4 imposes penalties on broadcasters failing to comply with Section 3.

For the BCCI, the grant of telecasting/broadcasting rights through exclusive Media Sharing Arrangements for cricket matches has proven very lucrative. Between 2007 and 2012, it had a profitable arrangement with Nimbus Communications Ltd. [‘Nimbus’], which used to run Ten Sports. For 2012-2018, the BCCI allotted these rights to Star India Pvt. Ltd [‘Star India’]. Star India in turn recruited ESPN Software Pvt. Ltd. [‘ESPN’] to distribute the signals.

In 2007, by notifications (here and here) under S. 3, Sports Act, 2007, the Central Government declared cricket matches to be sporting events of national importance, thereby forcing Star India/ESPN to send Prasar Bharti live broadcast signals for transmission on its terrestrial and DTH networks. Prasar Bharti re-transmitted these signals on the Doordarshan channel, DD1 (National).

It so happened that DD1 (National) was also a notified channel under S. 8, Cable Act, 1995. Accordingly, all cable operators nation-wide, by virtue of carrying DD1 (National), were granting their viewers access to cricket matches. This was eroding Star India/ESPN’s (and resultantly BCCI’s) revenue base in two ways: one, viewers were no longer taking out separate subscriptions to the Star India/ESPN channels; two, their advertisement revenue was hit, as the live feed shared with Prasar Bharti was advertisement or ‘clean’ (previously covered here).

Aggrieved by this legislative scheme, the BCCI and Nimbus filed two writ petitions before the Delhi High Court. The first writ, W.P.(C) 7655/2007, challenged the retransmission by Prasar Bharti to private cable operators by virtue of Section 3 of the Sports Act, 2007 read with Section 8 of the Cable Act, 1995.

The second writ petition, W.P. (C) 8458/2007, sought to strike down S. 3 of the Sports Act, 2007. It also sought to invalidate the Central Government notifications nominating the must-carry DD channels under the Cable Act, 1995, the notifications declaring specific cricket tournaments as sporting events of national importance, as well as the contractual clause inserted in DTH service providers’ license agreement with the state, which mandatorily required them to comply with Section 8, or face penalties under the contract.

The first writ petition was heard and summarily dismissed by Justice Ravindra Bhat on November 5, 2007. Against this dismissal, LPA 1327/2007 was filed. This, along with the second writ petition, were clubbed and heard by a division bench comprising Badar Durrez Ahmed and Vibhu Bakhru, JJ. During the pendency of these various petitions, Star India Pvt. Ltd. replaced Nimbus in the Media Sharing Agreement with BCCI, and along its distributor, ESPN Software India Pvt. Ltd., it impleaded itself into this litigation.

In 2015, the division bench overturned the decision of the single judge and ruled in favour of BCCI and its licensees. Against this, the Union of India, Prasar Bharti, and other interested parties moved an SLP in the Supreme Court. This was admitted and disposed off in favour of the industry on August 22, 2017. I examine this decision in detail in Part II of this two-part post.