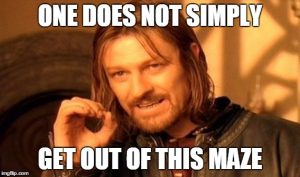 A way out finally? Image from here

It is no secret that the governments in India, both Union and State, have a dismal record in maintaining an authentic and easy to access database of legislations and judicial/executive decisions. Although things might have marginally improved over the last few years, most of the government websites continue to have a poor track record of collating legislations and judicial/administrative orders coherently. Legislations along with their amendments and connected sub-ordinate legislations are more often than not scattered across different websites and timely updates are hardly ever carried out. Ask any legal practitioner the time spent in retrieving updated legislations and one would get a better picture of the day to day struggle involved. If lack of intelligible access poses a huge challenge to even the professionals, one can imagine the plight of the common man who tries to navigate this maze (or shall I say, mess). Not only does this render the maxim ‘ignorantia juris non excusat’ redundant, but even makes one wonder if ignorance of law should in fact be made a valid defence.

Set against this background, the recent PIL filed in the Delhi High Court seeking directions to the Union government to make accessible authentic, updated and cheaply priced hard copies of bare acts makes for interesting discussion. Curiously, the PIL goes on to claim that the private publishers are infringing the copyright of the government in these bare acts and are thereby making illegal profits. While the prayer for making available bare acts needs to be tested against the touchstone of right to know, the submission as regards copyright infringement is to be examined from the prism of Section 52 (1) (q) of the Copyright Act, 1957 (the “Act”). First, the latter.

There cannot be much doubt as to government’s copyright over its own publications. Section 2(k) lays down a rather widely worded definition of what constitutes a ‘Government work’. The definition covers within its scope, all works which are made or published by or under the direction or control of the government, legislature, court, tribunal or other judicial authority in India. Moreover, Section 17(d) clarifies that government shall be the first owner of all Government works, unless there is an agreement to the contrary. That being so, one would have to examine if there exists any exception to this rule, which gives the private publishers the right to reproduce the Government works without infringing government’s copyright in them.

Section 52(1)(q) lays down the exceptions to those actions, which would otherwise have qualified as infringement of a Government work. Specifically, Section 52(1)(q)(ii) provides that the reproduction or publication of “any Act of a legislature subject to the condition that such Act is reproduced or published together with any commentary thereon or any other original matter” shall not constitute an act of infringement. Interestingly, the requirement of including commentary or original matter is confined to Acts of legislature and no other category of Government work covered under Section 52 (1) (q) has a similar requirement, including judgments.

As to what shall qualify as commentary or other original matter for the purpose of Section 52 (1) (q) (ii), I was unable to spot any judgment, which throws light on this aspect. Given how the emphasis is on ‘original matter’, it needs to be seen whether merely editing/updating an Act and giving references to amendments, which is the case with most bare Acts, would bring it within the safe harbour of the exception. On a separate note, given the already existing issues, such a high threshold for meeting the exception is bound to further impede access to legislations.

More importantly, it is baffling as to why there is an additional requirement associated with the reproduction of legislations when none exists for other categories of Government works. The requirement potentially jeopardises even those who digitise and reproduce legislations without any profit motive. Given the government’s abysmal track record of keeping an updated database of legislations, this is a requirement that everyone can do without.

The larger problem that the PIL has highlighted is the issue of accessing legislative and judicial documents in India. In this regard, a silent revolution of sorts has recently been initiated by the Delhi High Court through its orders in Union of India v. Vansh Sharad Gupta (see the relevant orders, here, here and here). Although these orders seem to have silently slipped under the radar, their possible impact on accessibility, if implemented properly, cannot be overstated.  Apart from directing the Union government to make legislations available online in an intelligible and machine readable format, the order, inter alia, lays down the need to maintain updated versions of legislations while cross-linking them to their corresponding rules and regulations.

It would be remiss if I do not mention the chain of events, which led to the passing of the above orders in the Writ Petition filed by the Union government. The  said Writ Petition was filed by the Union government challenging the order passed by the Central Information Commission (“CIC”) on a complaint filed by Mr.Vansh Sharad Gupta (Respondent in the Writ Petition), who was a law student at the time of filing the complaint. In his complaint, Mr. Vansh Sharad Gupta had pointed out the lack of access to updated legislations on the governments websites and how he was unable to contact the concerned Public Information Officers in this regard. Acting on the complaint, the CIC directed the legislative department of the Union to make available updated versions of legislations online while imposing a cost of Rs.10,000 for not providing the right contact details of the Public Information Officers. The decision of the Union government to challenge the CIC order was strongly admonished by the Delhi High Court in one of its orders in the same Writ Petition.

While one might be tempted to think that the orders of the Delhi HC will enhance access to legislations, past experience indicates otherwise. Directions for ensuring better access to legislations have been given by the courts in the past too (see, here and here), only for the status quo to remain. Needless to say, the continued inaction on the part of the government is in clear violation of the fundamental right to know and is in conflict with the principle of rule of law.

Coming back to the PIL, it would seem that the issue of accessibility raised therein has been addressed by the Delhi HC through its orders in Vansh Sharad Gupta (unless the Petitioner’s primary intention is to ensure access to hard copies). Nevertheless, the PIL presents an excellent opportunity to interpret the import of S. 52 (1) (q) (ii). One hopes that the requirement of ‘original matter’ laid down by the provision is interpreted keeping in mind the importance of enabling everyone to freely reproduce legislations. Moreover, for the sake of greater accessibility, it is imperative that the legislature itself soon drops the requirement of having to adduce commentary or original matter for taking recourse to S.52 (1) (q) (ii).