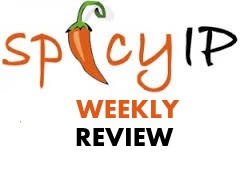 This fortnight’s thematic highlight was Pankhuri’s update on the Patent Working PIL matter at the Delhi HC. The Delhi HC had disposed of the matter on April 23, 2018. The Court directed the Government to complete all the steps towards effecting necessary amendments in the patent working provisions, strictly within the timelines proposed by it. Pankhuri highlighted how the stakeholder consultation process has already been undertaken by the government. She hopes that the Government comes up with a more optimal working disclosure format and implements it more rigorously in the years to come.

The topical highlight of this fortnight was brought about in a two-part guest post by Adarsh Ramanujan. Adarsh analysed a recent order passed by the Bengaluru Bench of the ITAT, where the ITAT held that the Google India was not a mere re-seller of advertising space to Indian advertisers but a licensee of Google Ireland’s IP. As a result, the payments made by it to Google Ireland were in the nature of  ‘royalty’, for which it was under the obligation to deduct tax at source as per the Income Tax Act.

The Court refused to quash the records pertaining to an F.I.R. lodged under S. 51, 63 and 63B of the Copyright Act, 1957 and SS.406 and 420 of the IPC, by the publisher of a book, for infringement of copyright in it by the applicants by way of publication of a 2nd edition of the book, without obtaining a license or permission for it and paying appropriate consideration. The Court noted on facts that the wording of the agreement between the parties was ambiguous, and the applicant should have printed a 2nd edition only after obtaining a license for the same, showing an intention to make a wrongful gain. The court also rejected the argument that the police made wrongful seizure and investigation as such powers are not available under S. 51, 63 and 63B of the Copyright Act, 1957 holding that SS.406 and 420 of the IPC were also alleged in the complaint. The Court rejected the application as dishonest intention was shown.

The Court held that a case of trademark infringement was made out against the defendant, who was selling products under the plaintiff’s mark ‘OPPO’ online at discounted prices, thus hampering the business prospects, reputation and brand value of the plaintiff, who received complaints from consumers regarding poor quality goods. It noted that the method of marketing and the manner of sale by the Defendant was to deceive, mislead and create confusion in the minds of the ordinary consumers or buyers as to the origin of the product.