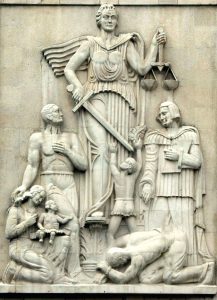 Outside the Court House at Tehran, Iran.

The Copyright Rules, 2013 followed the enactment of the Copyright (Amendment) Act, 2012 and were aimed at entirely replacing the Copyright Rules, 1958. Usually delegated legislation like the Copyright Rules, 2013 are meant to be confined to procedural issues that deal with the implementation of the parent legislation enacted by Parliament. The Copyright Rules, 2013 however ventures far beyond procedural issues and into the realm of substantive law making. In an ideal world, constitutional courts would frown at this practice because issues of policy and substantive law should be confined to Parliament which is elected into power by the people. That’s the essence of the landmark In Re. Delhi Laws judgment. Only issues pertaining to procedure should be delegated to the government. However Indian courts are quite permissive of delegation of power making challenges like the present case an uphill battle.

The challenges to Rules 56(3), 56(4), 56(5) & 56(6) was on the basis that the rules went beyond the remit of the power delegated to the government under Section 33A of the Act. This provision of the parent legislation requires all copyright societies to “publish a tariff scheme in such manner as may be prescribed”. My reading of the provision is that the government only had power to prescribe rules regarding mode/timeline of publication – for example in newspapers, on the website etc. The Copyright Rules, 2013 however fo much further and lays down an entire policy to regulate tariffs – specifying that the tariff scheme would have to mention different categories of users, different media of exploitation, different durations of use etc. It also specifies how royalties may be collected (for example royalties must be calculated in advance), prohibits minimum guarantees (an issue that was the subject of competition litigation) and prohibits any changes to the tariff scheme for a period of 12 months.

In my opinion, these rules go far beyond the power prescribed by Section 33A because the scheme of the parent legislation is quite clear that the issue of regulating tariff policy is left to the copyright board – an independent judicial body. Seen in this context, the government’s power in Section 33A(1) to prescribe rules governing the mode of publication of the tariff scheme, is limited to procedural issues like mode of publication and timeline.

The Division Bench of the High Court however decided differently. The court concludes, “We are of the opinion that the Rules do not negate the principal enactment and it cannot be said that they are repugnant to or in derogation of the object and purpose, the principal enactment seeks to achieve.” The line of argument taken by the court is not entirely convincing. The court presumes that Section 33A gives the central government the power to make a regulatory policy for copyright society and only conducts an analysis of whether that policy found in the rules impedes the rights of the copyright society to frame its tariff scheme and whether it conflicts with existing statutory provisions. This analysis is however secondary to the nature of power delegated under Section 33A. The court should have first explained the nature of the power delegated under Section 33A. In my understanding, the power to frame rules is confined to the mode of publication and not a substantive tariff policy as presumed by the court. The only regulatory powers are with the Copyright Board as evident from reading Section 33A.

If copyright owners do not get this judgment set aside on appeal it will mean that any future copyright societies will be regulated directly as per the whims and fancies of the bureaucratic babus sitting in the DIPP and the copyright office. I can think of no worse fate for India’s creative industry, than direct regulation by India’s unimaginative and often inefficient babudom (with honourable exceptions, of course).