Last week, our IPO granted a patent to Amgen covering the drug Broadlumab.  Brodalumab is a human monoclonal antibody designed for the treatment of inflammatory diseases including psoriasis  In the United States, Broadlumab is known as Siliq and in Europe it is Kyntheum.

The application for Broadalumab was filed as a PCT application – PCT/US2007/021174 (click here to see the page on WIPO – Patentscope) and was accorded application number: 2350/CHENP/2007. One can see the entire file on this link – https://www.quickcompany.in/patents/il-17-receiptor-a-antigen-binding-proteins

Sandeep Rathod – sent a link (http://ipindiaservices.gov.in/decision/2350-CHENP-2009-63576/2350chenp2009.pdf ) indicating that the patent had been granted: This was the controller’s decision in granting the patent.  It is a concise half page document as can be seen in the snapshot below: 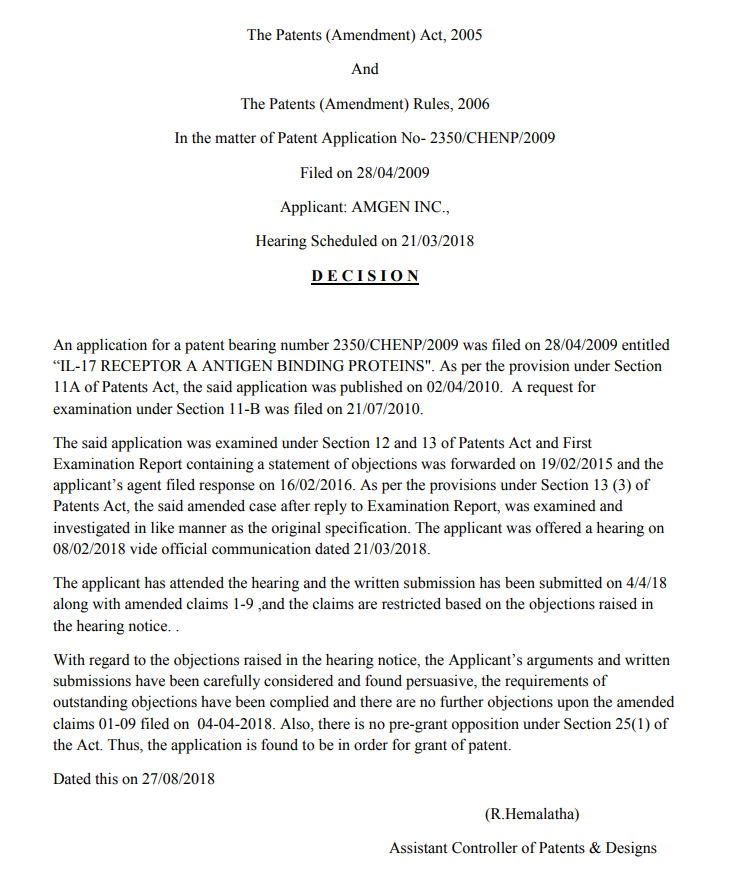 Once I saw the decision, I was curious to the the submission made on 04/04/2018 – It is a whopping 60 page document! It includes responses made to the office action issued – granted EP patent claims, studies done by Amgen and submitted to the US FDA.

It is my belief that the decision granting a patent should include basic reasoning that why it is being granted.  This would be helpful to the patentee – the absence of reasoning for grant is indicative of the (less) amount spent in analysing the response.  Typos aside (the hearing and notice dates are reversed) this half page order basically agrees with the detailed submissions made.

Reasoning is helpful.  For example, the recent post where patent was denied to Standard Innovation Corp for a sexual stimulation device (See complete application and file wrapper here: https://www.quickcompany.in/patents/electro-mechanical-sexual-stimulation-device

This application had a reasoned order where the objections were not removed. These included objections on the ground of novelty / obviousness. As far as morality is concerned, even though I do not agree with the Controller decision, the reasoning is there.