This is a monumental development: Judge Lucy H. Koh of the  Northern District of California has held that Qualcomm must license any willing licensee – this includes rival chipmakers, such as MediaTek or Intel or any other player.  This is huge: Qualcomm admittedly had never licensed any of its competitors.   Hence the decision may be read to hold that Qualcomm is in breach of its FRAND commitments.

In my view, this judgement is also valuable from another perspective: Whether chipsets can implement a complete standard.  There are several parties (like Ericsson, Nokia, etc.) who claim that the complete standard can only be implemented by an end device provider (for example a fully functioning mobile phone).  However, if I read it correctly, chipsets can indeed implement a complete standard (otherwise how would they be certified as conforming to a standard), and hence chipset providers are also to be licensed, if they approach the SEP owner.  This is in line with the SSO policy of widespread adoption of the relevant standard.

This is just based on a quick read and I might do a follow up on this later.  Regardless, the impact on Qualcomm would be huge.  Parties may line up to take a license to whom Qualcomm have refused to deal with earlier. 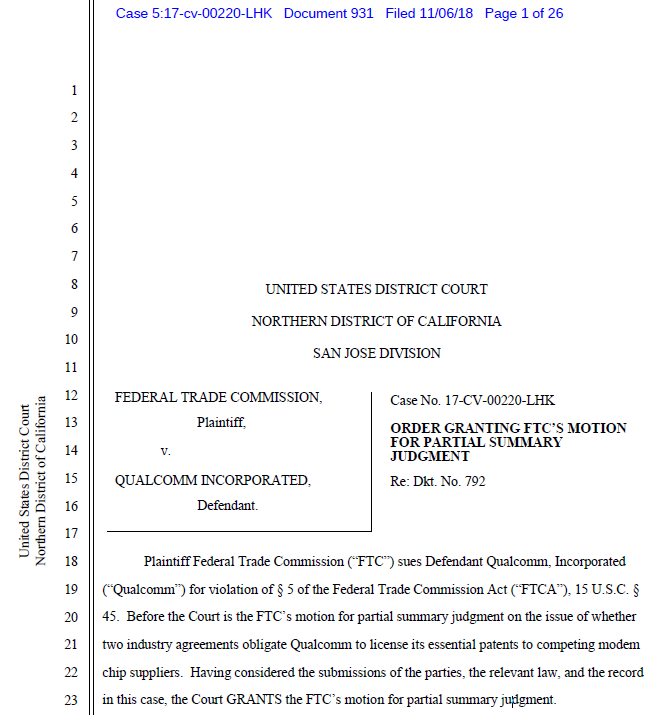 In its complaint, the FTC had alleged that Qualcomm had a dominant position in the industry and was the dominant supplier of modem chips.  Qualcomm also held SEPs for multiple cellular standards.  The FTC further alleged that Qualcomm had caused harm to the competition (Section 5 of the Sherman Act / abuse of dominant position) by not selling its cellular chips unless the customer also took a license to its SEPs.  These SEPs were licensed at an inflated price.  And also that Qualcomm entered into exclusive dealing arrangements, such as with Apple – thereby foreclosing access to rival chip manufacturers.

The court looked in detail at Qualcomm’s written assurances to TIA and ATIS to license its SEPs on FRAND terms.  Qualcomm had assured TIA that Qualcomm would make licenses available “under terms and conditions that are reasonable and non-discriminatory . . . and only to the extent necessary for the practice of any or all of the Normative portions . . . for the field of use of practice of the Standard.”

Likewise, Qualcomm assured ATIS that Qualcomm would make licenses available “under reasonable terms and conditions that are demonstrably free of any unfair discrimination to applicants desiring to utilize the license for the purpose of implementing” the relevant standard.  The court also cited the recent decision in TCL Communication Tech. v Telefonaktiebolaget LM Ericsson (C.D. Cal. Sept. 14, 2018) holding that under French law, ETSI’s acceptance of a standard that incorporates a SEP “forms a contract which includes the patent holder’s obligation to license”.

In Ericsson, the Federal Circuit affirmed that Ericsson’s FRAND commitments to license its SEPs under a SSO IPR policy were “binding” on Ericsson. and also Realtek Semiconductor Corp. v. LSI Corp., 946 F. Supp. 2d 998, 1006 (N.D. Cal. 2013) noting that the parties did not dispute that a SEP holder’s letters of assurance to license its patents on FRAND terms created a binding obligation.

This issue closes the case on the issue whether a SEP owner can exclude parties in the value chain to extract royalty from end device sellers.  This makes it clear that SEPs must be licensed to chipset owners, as they too are a willing licensee.