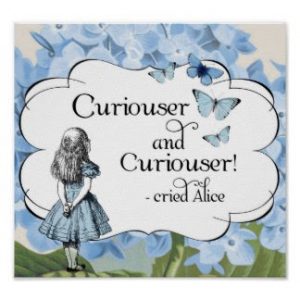 We bring you a guest post from the prolific Prashant Reddy, who has had to take a break away from regular blogging at SpicyIP since he now heads the judicial reforms team at Vidhi.

Fortunately, we managed to persuade him to pen a guest post on this rather curious decision, where a judge of the Delhi High Court has effectively ruled that an “expert” IP tribunal that lacks the alleged “expertise” can still decide IP disputes.

In his inimitable style, Prashant tells us why this decision is deeply problematic. No holds barred, and he calls a spade a spade! Rather rare these days, where speaking truth to power often results in targeted victimisation!

So without much ado, here you go:

Curiouser and Curiouser: The Delhi High Court Whitewashes an Infirm IPAB and Rules that a Plant Variety is a Patent..and Perhaps Even a Trademark!

Alice could well have said this in the wonderland that is Indian IP these days! In a rather strange ruling handed down on Monday, the Delhi High Court permitted the Intellectual Property Appellate Board (IPAB) to adjudicate “urgent matters relating to Patents, Trade Marks and Copyright”, despite the IPAB lacking the statutorily mandated quorum to hear these disputes.

That the IPAB has been mired in one controversy after another is an understatement! A constitutional challenge filed many years ago by Shamnad resulted in a decision that made it abundantly clear that only constitutionally competent members could man the IPAB and decide its various disputes. Unfortunately, till date, such competent personnel have not been appointed!

Currently, the IPAB has only one technical member, appointed under the Plant Varieties Protection & Farmer’s Rights Act to hear matters under that specific legislation. By waving his magic judicial wand however, Justice Midha invests this “technical member” (for Plant Varieties) with the power to adjudicate upon other IP disputes, over which he/she may possess no special expertise whatsoever!

In addition, Justice Midha has cleared the decks for the incumbent chairperson of the IPAB, Justice Manmohan Singh to hear these cases just by himself, should the technical member for plant varieties recuse himself for any reason. According to Justice Midha, the orders that have been passed by Justice Manmohan Singh do not suffer any invalidity on grounds of a lack of quorum. These are stunning directions from the Delhi High Court for reasons that I’ll explain below.

Chequered Innings of the IPAB and Chairman Controversy

Let us first start with some history.

Originally setup to hear only appeals from the Trade Mark Registry, the powers of the IPAB were subsequently expanded to hear a number of patents, copyright and plant variety protection cases. As per Section 84 of the Trade Marks Act, the IPAB requires a quorum of two members, one judicial member and one technical member, the latter being the member appointed for the relevant practice area i.e. patents or trademarks. Thus, for the IPAB to hear a patent case, it is required by Section 84 to have a technical member specifically for patent matters. This was the entire logic of creating the IPAB – to enable “technical expertise” in deciding IP cases. The problem, however, is that the DIPP is struggling to find candidates with the qualifications necessary for the posts of technical members. As a result, the IPAB has been dysfunctional for most of its history and it is no surprise that the IPAB currently has no technical member to hear any disputes outside of one IP area i.e. plant variety protection.  In other words, the IPAB lacks technical members to hear either patent or trademark matters.

Over the last year, Justice Manmohan Singh who has been the Chairperson of the IPAB has been passing a number of rather controversial orders while sitting as a single member, despite the law requiring a mandatory two member quorum for the IPAB to function. While most of these orders pertain to withdrawal and settlement of pending cases, it is still problematic, given that these orders effectively put a seal on the rights of the parties. It is thus not too surprising that some lawyers have publicly complained about Justice Manmohan’s conduct in this regard. See previous posts on SpicyIP here, here and here.

Mylan’s Challenge and Justice Midha’s Misreading of the Law

Enter the present writ petition filed by Mylan Laboratories before Justice Midha against an order of the Patent Office denying the company a patent. When tribunals are non-functional, it is completely legal to approach the writ jurisdiction of the High Courts for substantive relief on merits. Instead of hearing Mylan’s petition on merits and passing an order (which high courts are well within their power to do), Justice Midha passes this rather strange order.

“If the post of the Technical Member is lying vacant, IPAB can proceed to hear the urgent matters and the orders passed would not suffer invalidity on the ground of lack of coram.”

The precedents that Justice Midha cites to justify his questionable order are 4 judgments which he has cherrypicked to select specific quotations despite it being amply clear that all 4 cases can be easily distinguished on simple facts. Two of the precedents that he cites pertain to the Delhi VAT (DVAT) Act. However, a look at the orders (2nd para of the order has the text of the statute) makes it expressly clear that the tribunal mentioned in the DVAT Act requires a minimum quorum of only 1 member which means that these precedents did not deal with the issue of inadequate quorum. This eliminates two of the precedents cited by Justice Midha to claim that orders passed without quorum will continue to be valid. The other two precedents he cites pertain to the Election Commission’s quasi-judicial powers and the CA Act. Neither of these cases deal with the quorum of tribunals exercising judicial powers and are irrelevant to the facts of this case.

On the other hand, there is considerable case law where courts have come down heavily against violation of the quorum requirements of tribunals as specified by Parliament. For example, recently, the Government of India passed a notification allowing the National Green Tribunal to hear cases in single benches. The Supreme Court had to intervene to stay the notification and reiterate the position that these benches had a quorum requirement of 2 members.

In context of the IPAB specifically, the same issue cropped up twelve years ago in the Novartis case. The IPAB lacked the required quorum, given that Mr. Chandrasekharan, the only technical member then (for patents) was conflicted out. The government and the Madras High Court then struck a deal to permit the Chairperson and Vice Chairperson of the IPAB to hear the Novartis appeal without a technical member. Shamnad had pointed out that this was illegal way back in 2007. When Novartis appealed to the Supreme Court, the court refused to allow the matter to proceed without a technical member and appointed an ad-hoc technical member to the IPAB in order to comply with the quorum requirements of Section 84. Strangely enough, Justice Midha’s order cites to this Supreme Court order from 2007, but makes no mention of the logical conclusion that flows from this order.

I’ve saved the worst for the last. In the next hearing, Justice Midha is going to decide on a proposal put forth by the petitioner’s counsel as well as the amicus, that Justice Manmohan Singh be allowed to continue beyond his retirement date in September, 2019 until the DIPP appoints a new chairperson to the IPAB. In other words, Justice Midha, a one-time colleague of Justice Manmohan Singh from the Delhi High Court is going to consider whether the latter can hear cases beyond his retirement date.

As a final note, let me mention that the extent to which this order has gone to whitewash orders of the IPAB passed by Justice Manmohan Singh without adequate quorum, only goes to establish that young Mr. Rishab Mohnot (a SpicyIP student fellow) was bang on the point when he concluded that Justice Manmohan Singh should not have passed the orders in question without the required quorum.