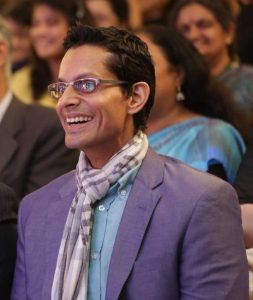 While we’re all struggling to come to terms with the heart breaking loss of our Founder and Chief Mentor, Prof. (Dr.) Shamnad Basheer, we bring to you a lovely tribute to him by Prashant Reddy or the “Prolific” Prashant, as Prof. Basheer often used to fondly call him. Prashant was invited by Prof. Basheer to join the blog in 2007 and had since then worked very closely with him towards fostering transparency in the Indian IP ecosystem, both through regular blogging at SpicyIP (till earlier this year) and otherwise. Prashant currently heads the Judicial Reforms vertical at the Vidhi Centre for Legal Policy.

Shamnad Basheer meant a lot of different things to those who knew him in person or through his writings. A towering genius, an inspiring academic, a mentor, a lovely friend, a master with the pen, a creative lawyer, a social entrepreneur, a writer of recommendation letters, a passionate man with a line for every moment, an aficionado of bad puns and great acronyms, a sampler of strange concoctions, storyteller par excellence and most importantly, a kind man.

Let me start, with the last listed virtue, kindness. One of his most endearing qualities was his ability to speak to a person, identify their best trait, praise them for it publicly and make that person feel exceptional. As a rather cynical lawyer, I was always amazed by this ability of his to see the good in everybody. His faith in people would sometimes be misplaced but come the next person he would automatically reset to unvarnished kindness. It is this endless reservoir of kindness in his heart that led to so many enduring friendships and the setting up of ventures like IDIA.

The second personality trait of Shamnad that always struck me, was his talent of storytelling. Over the last 12 years, I have met him countless times and at each encounter he would have a fascinating story about his life experiences from the past or the present. At times, even if the story was not very great, Shamnad would narrate it with such flair that we would be hanging off the edge of our chairs.

I presume that most of the readers of SpicyIP will remember Shamnad for his academic brilliance and his stellar writing. After graduating from the National Law School of India University, he earned multiple degrees at Oxford, including a PhD in IP as a Welcome Trust scholar. He was teaching at the George Washington University when he first shot into the national limelight in India in 2007 after a high-level expert committee of the Indian government on patent laws was accused of plagiarizing his report which was commissioned by the Intellectual Property Institute. Unlike what has been hinted at in the obituary published in the Indian Express, Shamnad had publicly disclosed the source of the funding in his report, which is available on SSRN for anybody to check. The actual controversy at the time was the allegation that his conclusions were influenced by the funding. It was an allegation that hurt him deeply but he did tell me later that the episode taught him that perception of neutrality is as important as actually maintaining academic integrity. He continued to publish high-quality pieces on various aspects of patent law. For those of you interested, all of his papers are available on SSRN over here.

In 2007, SpicyIP which Shamnad had started out of boredom, was still in its infancy. The controversy around the government report helped thrust the blog into the national limelight. Here was a charismatic, media savvy academic breaking down complex legal issues into simple speaking points. With reporters hungry for information about the new amendments to Indian patent law and its implications for public health, they often turned to the blog and by implication Shamnad, to make sense of a complicated subject area. In his inimitable style, Shamnad helped frame the debate and explain the nuances of the law to virtually every reporter on the pharma beat. It was only a matter of time before he became one of the most influential voices in Indian IP. His aim for SpicyIP at the time, was always to breakdown intellectual property law into a language simple enough that could be understood by everybody and not just lawyers. As an experiment with dissemination of legal information, I think most of us will agree that Shamnad’s experiment SpicyIP succeeded with flying colours. His style of writing, without the heavy jargon that has come to define academic writing in India, was one the main reasons for this success.

My fondest memories of Shamnad are of him as the chief mentor at SpicyIP. He gave me a simple brief – keep it spicy! While none of us could match him on the ‘spicy’ quotient, it never stopped us from trying. He was extremely perceptive of our individual strengths. For me, it was apparently my ability to sniff out a spicy story through RTIs.

There was a time on the blog when we were doing several pieces that strained his relationship with his friends who were practitioners in law firms or the industry. As his chief troublemaker on SpicyIP, my pieces were very often the reason for those strained relationships. It was a challenging period for both of us and it did lead to some turbulence in our relationship on SpicyIP. Despite this, not once did Shamnad ask me to run a story by him first for his approval.

Over the years, I could see a hint of pride in him as he saw all of us grow as writers on the blog, get admitted into top IP programs across the world’s best universities and make our mark in the professional world. He deserved to be proud of our achievements. After all, he was the reason that many of us writers on SpicyIP are where we are today. Be it through recommendation letters for colleges or job or client referrals, Shamnad took care of all of us and never asked for anything in return. It was an unconditional love that most of us can only strive to emulate.

Somewhere along the way, Shamnad also became the most visible academic litigant in India. The restless soul that he was, he could not stick to academic writing when the law afforded him the opportunity to drag the government to court and test an academic hypothetical before a court of law. While he is most remembered for his intervention in the Novartis case where he argued before the Supreme Court on the interpretation of Section 3(d) and the Delhi University photocopy case where he was the key legal strategist, his first foray into public interest litigation was actually a constitutional law case where he challenged the constitutionality of the Intellectual Property Appellate Board (IPAB) on the grounds that it lacked judicial independence from the central government. It was a case that I had helped him with when I was his Research Associate in Calcutta in 2010 and we were both very excited about it. The case ended in a victory, with the Madras High Court striking down certain provisions of the law apart from bulletproofing the IPAB from executive interference.

A second pending case, which has slipped from public memory but which was very close to his heart was the one involving the RTI Act and its clash with the Patents Act. There are several other lawsuits filed by him, that are pending before the Supreme Court and Delhi High Court, regarding Aadhaar, the Bar Council of India and Form 27. The aim with each of these cases was to get the courts to push the boundaries and set down new jurisprudence that promoted transparency, protected judicial independence and protected our rights.

Separate from the academic and litigation aspects of his IP career, Shamnad was fascinated by grassroot innovators. There was a very long phase when I would regularly hear updates from him on the brilliant inventors that he would meet in different parts of the country working out of garages and sheds creating excellent inventions of great utility. Not only did he want to forge ways to bring such untapped creativity to the market, he also wanted to make creativity and inventor ‘cool’. He did want to institutionalize such an effort but there is only so much one man can do.

In 2010, the social entrepreneur within him, which was not satisfied with excelling in academia, set into motion another experiment with the setting up of the IDIA venture to bring students of varying backgrounds into law school to ensure that quality legal education did not remain the privilege of elite. Most of the outpouring for him in the last few days has been because of the lives he has impacted through IDIA.

Over the last few years Shamnad was afflicted by a mystery illness that was never diagnosed. It was clear that his body had taken a beating. Surprisingly his mind was still agile, although you could tell that he was growing weary of his physical condition. I can only hope he is at peace now.

For many of us, especially his young IDIA students, I suspect Shamnad’s death at the young age of 43 is one of the biggest personal tragedies we have faced in our lives. It has certainly been the case for me. The last few days have been a haze of disbelief, confusion and buckets of tears. It has been heart-breaking to refer to him in the past tense in this piece with the knowledge that I will never receive another excited email or phone call from him discussing the latest bit of IP gossip or the latest angry email he got from someone upset with SpicyIP.

I am told time will heal all wounds, even a Shamnad-sized wound. Regardless of whether that happens, I do think we must all celebrate his life and the memories he left behind for us. He went too soon but what a life it has been!