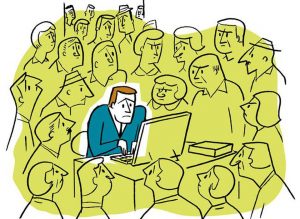 When FaceApp took the Internet by storm, there was furor over its broadly worded privacy policy. FaceApp is not alone, as there is similar backlash against Facebook’s vaguely worded terms. For instance, take a look at this term in Facebook’s policy:

“Permission to use your name, profile picture, and information about your actions with ads and sponsored content: You give us permission to use your name and profile picture and information about actions you have taken on Facebook next to or in connection with ads, offers, and other sponsored content that we display across our Products, without any compensation to you.”

“You grant FaceApp a perpetual, irrevocable, nonexclusive, royalty-free, worldwide, fully-paid, transferable sub-licensable license to use, reproduce, modify, adapt, publish, translate, create derivative works from, distribute, publicly perform and display your User Content and any name, username or likeness provided in connection with your User Content in all media formats and channels now known or later developed, without compensation to you.”

These terms are not unique to FaceApp. Rather, other companies, including facial recognition services and Facebook include similar terms. In essence, these terms invoke the right of publicity and its transferability. The right of publicity grants individuals control over commercial use of their name, image or likeness. There is confusion regarding its theoretical foundation. In this post, I would argue that the right of publicity is a personal right and hence, not alienable and non-transferable under Indian law.

Delhi HC dealt with the first notable case, ICC Development (International) v. Arvee Enterprises. The plaintiff, ICC Development, organizer of ICC World Cup, had filed a suit to own and control all commercial rights relating to ICC events. It contended that due to widespread publicity, ICC World Cup had acquired a “persona” of its own in ICC cricket events. It alleged that the defendant, Phillips India misrepresented their association with plaintiff in their advertisements and was commercially exploiting the “persona” or “identity” of the plaintiff to sell its goods.

In contrast, in DM Entertainment v. Baby Gift House, Daler Mehndi had assigned his personality rights to DM Entertainment. The Delhi HC recognized this transfer as he had a “quasi-property” right in his persona to protect his “economic” interests. Interestingly, the Court also held, “The right of publicity can, in a jurisprudential sense, be located with the individual’s right and autonomy to permit or not permit the commercial exploitation of his likeness or some attributes of his personality.”

Thus, the Court held that both, right of publicity—as property and privacy—co-exist.

On one hand, it held that the transfer was justified to protect economic interests. On the other hand, it rooted right of publicity in autonomy, and not transferable. It would be quite paradoxical if a right inhered in autonomy allowed property rules to destroy itself.

In Titan Industries v. Ramkumar Jewelers, the plaintiff had sued for the unauthorized use of their advertisement in relation to diamonds, which Mr. Amitabh Bacchan and Ms. Jaya Bacchan were promoting. These celebrities had assigned their personality rights to the plaintiff. On plaintiff’s standing to sue on behalf of the celebrities, the Court delved into a succinct discussion. It held that plaintiff had standing over an exclusive license agreement with the celebrities. Interestingly, the Court referred to a paragraph in Haelan Laboratories v. Topps Chewing Gum, which has recognized a right of publicity independent of privacy to protect “economic” interest in personality rights. Haelan created a common law right of publicity to validate the exclusive agreement between plaintiff and celebrity basketball players who were promoting the product.

With these rulings, the Delhi HC drew a trajectory as US. In essence, it recognized a “property” interest in personal rights, without explicitly distinguishing the right of publicity from its alignment with privacy, as in Haelan.

It was misguided to create a distinct right of publicity. First, ICC clearly held that right of publicity was a facet of privacy. Second, ICC was not contradicted by subsequent cases, which created a distinct publicity right without ground. For instance, D.M. Entertainment concurred with ICC on jurisprudential basis whereas Titan Industries cited a paragraph from Haelan Laboratories, an American case, to express dissent! In Puttaswamy, Kaul J. affirmed ICC. His obiter was restated in Puttaswamy (2018).

The alienability of publicity has been severely criticized. It has been argued that the approach in Haelan—to create an assignable right in order to protect commercial interests—is itself unrequired. Further, this approach has created a class of publicity holders. This class benefits from the economic exploitation of human data, whereas identity holders are unable to profit. In the digital age, this unexpected outcome is even more exacerbated. It also lacks any theoretical foundation, since a “publicity holder” can enforce the rights of an identity holder, even against the latter! Attachment of a property label also disengages the foundation of publicity and privacy.

To this effect, any term of service that treats publicity as an assignable property right is against the law, regardless of India’s lack of a data protection law. Thus, it is interesting that a largely ignored field of IP is not only, not a field of property law but also capable of serving us well in the digital age, where all else might fail!