We’re pleased to bring you a thought provoking post from Dr. Sunanda Bharti, on the ‘Make in India’ trademark. In this post, Sunanda examines the now famous ‘Make in India’ mark and raises the question of whether it actually acts more like a certification trademark. Sunanda is an Assistant Professor in Law at Delhi University and has written several guest posts for us, which can be viewed here.

What Kind of Trademark is ‘Make in India’? A Brief Academic Inquiry

The definition of ‘trademark’ under section 2(1)(zb) of the Trademarks Act, 1999 includes Certification Trademarks (CTMs). At the same time, they are separately defined in section 2(1)(e). This is because though CTMs are trademarks (to be used in respect of goods/services, in course of trade), they differ from ordinary TMs in many essential characteristics.

The purpose of the present post is to briefly analyse the nature of the ‘Make in India’ TM, which is registered as a device trademark as a multiclass application in Classes 9, 16, 18, 25, 28, 35, 38, 41 and 42. The author maintains that though the mark is registered as an ordinary TM —it ends up displaying many features of a certification mark. It’s prominent presence on the carousel of the website of the Board of Indian Standards, that owns/manages certification TMs in India, confounds the curiosity surrounding the nature of this strange TM. The following may offer some insight:

To achieve the above end, Make in India initiative was given a face in the form of a logo, which is a silhouette of a lion on the move. It is made of cogs and symbolises manufacturing. It is registered as a device mark with trademark application number 2829230, owned by Secretary, Department of Industrial Policy and Promotion [DIPP], Ministry of Commerce and Industry, Government of India.

It is to be noted that though ‘Make in India’ is a registered TM—there are no goods and services provided by the Government of India under that TM. Instead, the mark is available, upon prior approval, to be put on any good manufactured in India or any service generated to cater to the stated 25 manufacturing sectors in India.

Purpose of Certification TM versus ‘Make in India’ TM: Additionally, it is also worth appreciating that ‘the purpose of a certification trade mark is to show that the goods or services in respect of which the mark is used have been certified by some competent person in respect of certain characteristics such as origin, mode of manufacture, quality etc.’

Given the above understanding, the function that ‘Make in India’ TM ends up performing, is very close to that of a certification mark. This is because unlike an ordinary trademark, it does not indicate origin by identifying the manufacturer, producer or provider of the goods or services. Instead, it conveys the message that the goods or services (on which the Lion device mark has been put) have been examined or in some way certified by the GOI (that does not trade in those goods or provide the services) to have been manufactured in India.

The very presence of ‘Make in India’ TM on a product or service is likely to give the consumer the assurance and confidence that the product has been manufactured in India, which may be key in their decision on whether to purchase a particular product/service or not. It is the submission of the author that just as a certification mark, the ‘Make in India’ mark is open to be used by various manufacturers/service providers (as per guidelines) to indicate that their products and services have certain characteristics—such as, in this case, presence of the mark would indicate that the product has been manufactured in India, with Indian resources, manpower etc; that it has contributed somehow to the growth of the Indian economy; that it has generated employment for India; that it facilitates a step closer to the achievement of ‘Aatmnirbhar Bharat’ and so on.

GOI does not trade in goods or provide the services on which ‘Make in India’ is supposed to be put: This reality is aligned with yet another feature typical of a Certification TM–section 70 of the TMA, 1999 provides that ‘a mark shall not be registrable as a certification trade mark in the name of a person who carries on a trade in goods of the kind certified or a trade of the provision of services of the kind certified.

Requirement of Regulations to enable use of the mark: Let us look briefly at what a typical certification mark aims at. ‘ISO, for instance, is registered under the TMA, 1999 (Trademark Application Number: 1754613) and owned by the Bureau of Indian Standards (BIS), and is a certification trademark—and its TM registration certificate expressly says so.

It is registered in class 16, which means its managing/certifying body, that is BIS, can certify whether ‘Paper and cardboard; printed matter; bookbinding material; photographs; stationery and office requisites etc have been made as per the standards acceptable to BIS (Bureau of Indian Standards).

The above discussion clearly shows that the ‘Make in India’ TM is (sort of) sui generis in its nature and impact. Technically, it is neither completely here nor there, and as IP scholars, it is important for us to take cognisance of that. 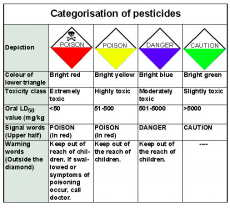 Postscript: It is worth mentioning that in India, there are a few marks which are mandatorily required to be put on products but are not classified as certification marks. They are not trademarks either but function more as informatory labels–like the toxicity label (under the Insecticides Rules, 1971) which identifies the level of toxicity of pesticides (see picture for reference/source)

Whether the ‘Make in India’ logo is merely an instructive mark and yet registered as a TM [?] is a food for thought for us to ponder upon. I invite your valuable comments on that.