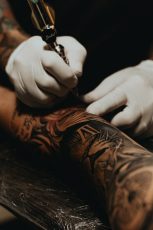 The world’s attention was first drawn to the copyrightability of tattoos when Victor Whitmill, the artist behind Mike Tyson’s face tattoo, sued Warner Bros for an imitative tattoo worn by an actor in Hangover II. Since then, I find that there has been a raging discussion regarding tattoo artists’ copyright over their tattoos, including issues like fixation, ownership and fair use. This post does not focus on these questions of copyrightability. Instead, it develops upon an important point raised by Devika Agarwal in her post, where she suggests that celebrities’ tattoos might form indicia of their personality. In such a case, tattoo artists’ economic as well as moral rights over their designs would inevitably clash with the celebrity’s publicity rights over it. This post explores this issue.

At the outset, in India, tattoos appear to satisfy the statutory conditions of copyrightability. Section 13(1)(a) of our Copyright Act only requires artistic works to be ‘original’ to enjoy protection. Unlike US Copyright law, there is no precondition for fixation in a ‘tangible medium of expression.’ Thus, as long as the design shows sufficient originality, there is no reason that fixation on human body as a medium of expression would be an issue (this issue, as part of the larger subject of copyrightability of tattoos has been discussed in detail here and here in this blog).

However, when the tattoo bearer is a celebrity, the tattoo becomes closely associated with her image and persona. As Devika rightly pointed out, many celebrities co-design their tattoos, adding elements that complement their personality. These tattoos then become powerful visual images that people associate with the celebrities, often becoming representative of them and their brands. When tattoos become indicia of a celebrity’s personality, they step into the realm of publicity rights.

The right of publicity is widely accepted to be a kind of IP right that protects a person against the misappropriation of their name, likeness, or other indicia of personal identity. Although publicity rights are not codified in India, there have been several cases revolving around these rights. In ICC Development v Arvee Enterprises, the court held that publicity rights arise from the right to privacy and inhere in an individual or in “any indicia of an individual’s personality like his name, personality trait, signature, voice, etc.” The Court further held, “The right of Publicity vests in an individual and he alone is entitled to profit from it. For example if any entity, was to use Kapil Dev or Sachin Tendulkar’s name/persona/indicia in connection with the ‘World Cup’ without their authorisation, they would have a valid and enforceable cause of action.” This understanding of publicity rights has been accepted and followed by many Courts subsequently, mimicking the common law right against passing off. In D.M. Entertainment v. Baby Gift House, it was observed that publicity rights entailed the right to permit or prevent the commercial exploitation of one’s likeness or attributes of one’s personality. This was further upheld in Titan Industries v. Ramkumar Jewellers and then in Tata Sons v. Aniket Singh.

Notably, in the Puttaswamy case, Justice Kaul, while discussing personality rights opined that, “The right of publicity implicates a person’s interest in autonomous self-definition, which prevents others from interfering with the meanings and values that the public associates with her.” This has been discussed further in this blog here. An individual thus has the exclusive right to authorize the commercial exploitation of his likeness or other attributes of his personality.  This is where the conflict with copyright arises.

What happens when a tattoo artist who is a copyright holder sues a celebrity for infringing his rights over the tattoo? While Indian courts are yet to witness such disputes, they are not unknown to US courts. Reed v. Nike and Escobedo v THQ revolve around such instances. In India, if tattoo artists were to be vested with copyright over their designs, either entirely or as joint authors with the tattoo bearer, their rights under the Copyright Act would stand at odds with the publicity rights the latter enjoys over their tattoos. Section 14(c) provides six economic rights in an artistic work, including rights to communicate the work to public, to reproduce it, to issue copies, and to make adaptations. Any attempt by the tattoo artist to exercise these rights would necessarily be an infringement of the exclusive publicity rights vesting with the individual. Even if the artist were to assign or license her rights over the tattoo to the tattoo bearer, since the latter theoretically enjoys publicity rights on it, it would imply that the celebrity is paying royalties to enjoy what is, in fact, her own.

The Question of Moral Rights

Aside from economic rights, an author of a work also enjoys moral rights, which are stipulated under section 57 of the Indian Copyright Act. Of importance, here, among the moral rights available to an author under Section 57 is the right of integrity. The author of a work can sue against any distortion, mutilation, modification or other act in relation to their work, if the same is prejudicial to her honour or reputation.

A conflict between moral rights and constitutional rights has been witnessed before in the case of Raj Rewal v Union of India (covered on the blog here). In this case, an architect petitioned against the demolition of a building he designed, claiming that the reduction of his creative corpus was prejudicial to his reputation. The court rejected the argument and held that what cannot be seen, cannot affect the author’s reputation. The first thing that follows from Raj Rewal is that Section 57 cannot prevent a tattoo bearer from concealing or removing his tattoo altogether, as the provision does not expressly prohibit removal. This leads us to yet another more pressing question: what other acts would be prohibited per Section 57(1)(b)? Can a celebrity modify her tattoo?

Raj Rewal answers this question too. The Delhi High Court held that unlike other copyrighted works, architectural work is attached to land, which is property in its own right and entitles its owner to the right to property. Right to property being a constitutional right enshrined in Article 300A, triumphs over moral rights, which are only statutory.

In India, personality/publicity rights and right to privacy are treated as two sides of the same coin. The Supreme Court in Puttaswamy elevated the status of personality rights to that of a fundamental right under Article 21. On the other hand, Section 16 of the Copyright Act declares the statute to be the only source of copyright. Applying the Raj Rewal principle, it can be assumed that publicity rights would, in all circumstances, defeat the tattoo artists’ moral and economic rights arising from the Act. The way law currently stands in India, a tattoo artist, despite having copyright over his designs would be left with no way of enforcing them.

One suggested way of tackling the conflict of overlapping rights has been to treat tattoos as works made-for-hire under Section 17. This way, the economic rights on the tattoo would belong to the tattoo bearer who has commissioned them.

In my opinion, this is a difficult proposition since designers are usually freelancers and not employees of the tattoo bearers, so their relationship may not qualify as contracts of service under Section 17(c). Like independent contractors, tattoo artists would be first owners of copyright of their work. This is why several celebrities make their tattoo artists sign waivers or assignment deeds allocating all rights over their design to them.

Another suggested route is that of an implied license (a non-exclusive license provided by the artist to the tattoo bearer), which was recognized in the recent US case of Solid Oak Sketches v. 2k Games. However, owing to the fundamental right status of publicity rights in India, this would present the same problem of obtaining a license to exercise rights which already belong to the tattoo bearer, aside from the problems outlined by Kiran in her post.

Comparing the options, work-for-hire explanation hinged under section 17(b) appears to be most logically consistent with tattooing practice. Section 17(b) provides that for photographs, paintings, portraits, engravings and cinematographic films made “at the instance of a person”, such person owns copyright. Although none of the specified works are made on the human body as a medium, tattoos may, by some long shot, be regarded as ‘engravings.’ An amendment in Section 17(b) to include body art would ensure that both publicity rights and economic rights are vested in the tattoo bearer. However, all of these solutions, i.e., implied license and work-for-fire treatment under Sections 17(b) and 17(c) only address the economic rights overlap. The conflict between the author’s inalienable right to integrity and publicity rights still remains. Therefore, it is necessary to have legislative clarity on the demarcation between all of these overlapping rights.

With the emergence of previously unimagined mediums of expression, this issue demonstrates the importance for Copyright law to address the specific problems presented by them. The Legislature must lay down a clear ambit for publicity rights, beyond what has been generally pronounced in court decisions. Ideally, both the artist and the tattoo bearer must be prohibited from making profit solely on the basis of the fame or artistic merit of the other, respectively. This must be complemented with solutions for cases where misappropriation and legitimate use cannot be distinguished.