We’re pleased to bring to you a guest post by Aatmik Jain, examining how Indian copyright law can protect presentations of gastronomic creations. Aatmik is a 3rd year student at the West Bengal National University of Juridical Sciences (NUJS), Kolkata.

As the saying goes in the culinary world, food is first savoured with the eyes, then with the nose, and only lastly, with the mouth. Today, chefs are putting in great efforts in enhancing this visual experience – from Momin Faqi’s ‘Herb Crusted Scotch Eggs Baby Greens’ to ‘Poppadum’ by Saurabh Udinia. The need for uniqueness has come as a consequence of a competitive consumer centric market. Food blogging has become popular and even ordinary guests nowadays, first relish the visual delight of the dish by clicking a quick picture for their social media accounts.

Resultantly, chefs undergo rigorous training and put in an unprecedented amount of labour and skill to perfect this art. The creative works resulting from this, need legal protection. This post will examine how Indian copyright law can protect presentations of gastronomic creations. 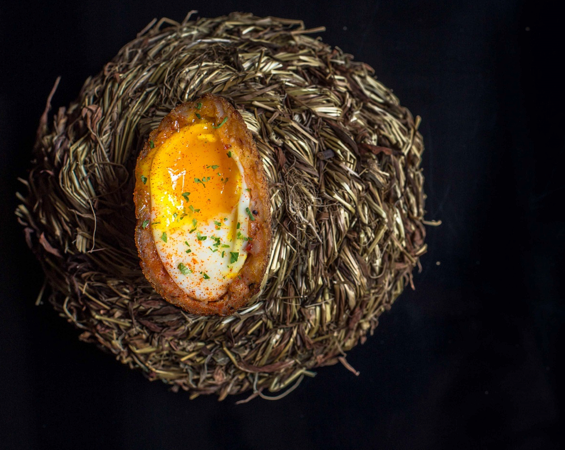 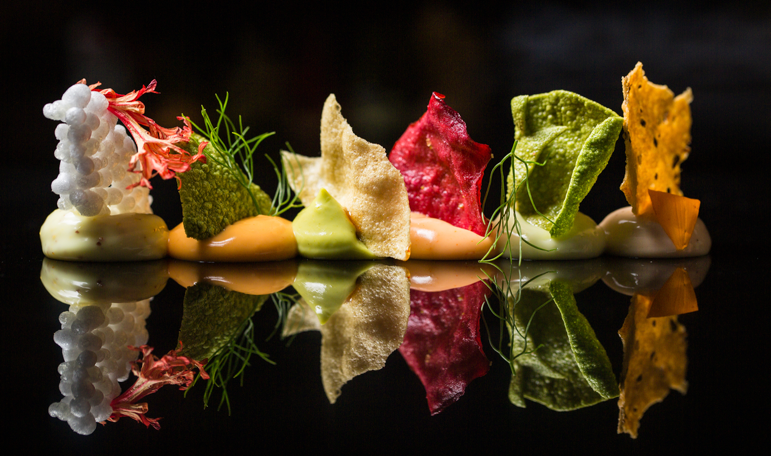 Food-plating can be saved from imitation if allowed to be copyrighted. To enjoy copyright, three requirements need to be fulfilled; it should (1) be ‘original’ (2) fall within statutory definition of ‘work’, and (3) be fixed in a tangible form. All three come with their own issues, which would be dealt individually.

The Copyright Act, 1957 (‘the Act’), does not define the standard of originality. However, after EBC v. D.B. Modak, originality standard in India is situated between the two extremes of ‘Sweat of the Brow’ and the ‘Modicum of Creativity’ tests. The understanding is that a work is original if the author has put his/her mind, skill and labour in the work with a minimum degree of creativity. Further, if the work is derived from data contained in pre-existing works, then by ‘selection, co- ordination or arrangement of such data, the new work should be somewhat different from the pre-existing ones’.

The above standard would not be the ideal standard to follow in the current case. There is a strong tradition in the culinary industry of drawing inspiration from each other’s work in the same cuisine, and many works are derivative. Then there are certain cuisines which are innately presented in a particular way. By current standards, a chef who makes only a minimal change to create a ‘somewhat different’ presentation of such cuisine than the existing ones, would easily satisfy the criteria for originality. However, this would allow creation of monopoly in that cuisine and cause its appropriation.

For example, all Indian Thalis, are plated with multiple bowls arranged at the periphery of a large plate, and all Japanese Ramen Noodle Bowls, are dressed fairly similarly. Only changing the dishes inside the bowls for a Thali or changing the top-dressing for a bowl of Ramen, although minimally creative, is still not sufficiently original. In such cases, the winner can simply not be the one who merely fixes his/her idea somewhat differently, but should be one who also has a fair degree of ingenuity attached to the manner of fixation.

Importing the American Scène à faire doctrine (usually followed for literary or dramatic works) would help here. Per this doctrine, certain scenes or themes essential to a genre are not provided copyright as they are customary. For e.g. it is common for horror films to have scenes like blood stained mirrors, dark rooms, unkempt attic or ghosts under the bed. Something moves out of the Scène à faire limitation when the expression is novel and separate from the clichés of that genre. An example could be having a clown (‘Pennywise’), as the ghost-villain, in the horror movie IT. Analogously, simply putting up an Indian Thali would not deserve protection but the Special United India Thali at Delhi’s Ardor 2.1 Restaurant may fall outside of this doctrine’s limitation. 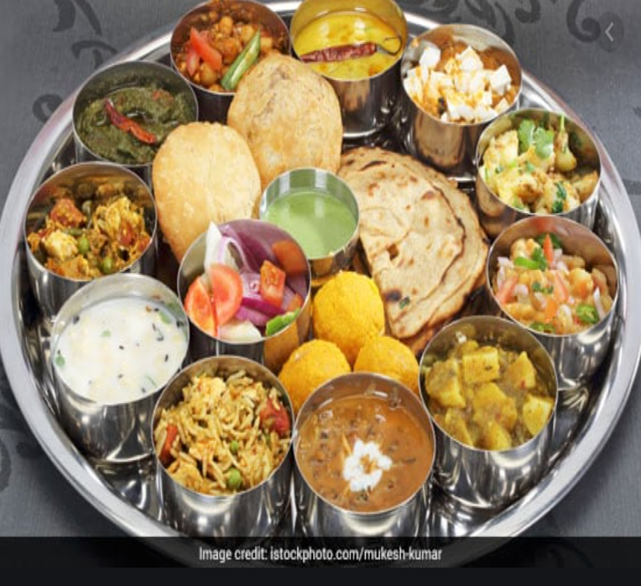 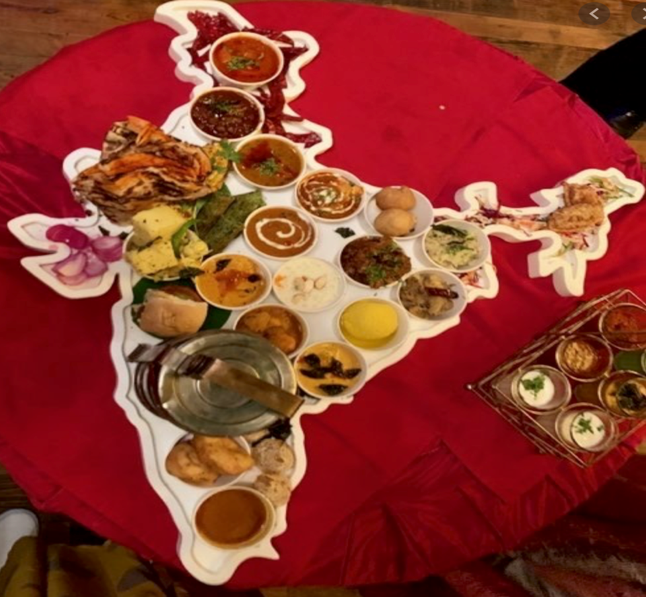 2. Requirement of being a ‘work’

The second requirement is for the original creation to be a ‘work’ as defined under section 13 of the Act. One such category of work is artistic work, as defined under section 2(c). Food presentations can find protection under this category as works of ‘artistic craftsmanship’. They are always seen as artwork in the industry. Plating is considered as the ability to create a ‘picture’ on a plate, and chefs do this with great perfection. Exactness in colours, size and textures is emphasised. Distinct cutlery is used to offer the right appeal. The outcome is certainly a work of artistic craftsmanship.

The final requirement of ‘fixation’ varies for different types of works. Works which are dramatic, cinematographic or are sound recordings, require statutory fixation, Interestingly, musical works required fixation in writing or graphic form until an amendment in 1994. The amendment was inspired by Indian Performing Right Society v. Eastern India Motion Pictures, which stated that mandatory fixation for musical works disentitled the singer and only protected rights of the composer. Thus, Indian law has had varied trajectories adopted with respect to fixation.

Works such as photographs, sculptures and those of architecture, are by their very nature fixed. Consequently, there has not been significant debate over fixation of artistic works. While the Act is silent on this, Copyright Manual on Artistic Works in its foreword, understands a copyright to arise when a work is created and ‘fixed in a tangible form’. At the same time, the law holds no proper definition of fixation in a ‘tangible form’. In the United States, the statute expressly states that work is ‘fixed in a tangible form’ when it is sufficiently permanent or stable, to be perceived for more than a transitory duration. Borrowing this requirement of permanence into our law, would deny copyright to food presentations. Since, on consumption, the dish’s tangible form gets destroyed, fixation would not be considered to have happened with a sufficient degree of permanence.

One might ask, “why not simply click a photograph of the plating? A photograph is permanent, and the author can reproduce 3D versions of his/her 2D work as per section 14(c)?”. Here is a simple catch. Each photographer holds copyright over their individually clicked picture and thus, both the chef behind the dish, and the guest eating it, can later make their own 3D reproductions of it. A guest may even grant license to another chef for such reproduction of his/her work. Clearly, proxy methods such as photographing defeat the purpose sought and it would be better for the copyright to exist in the original presentation itself.

Instead of focusing on tangible fixation in this scenario, we must delve deeper and go into the very purpose behind having the fixation requirement. In India, fixation exists to meet the fundamental principle that ‘a copyright should protect the expression and not the idea’. However, several copyright regimes across the world meet this principle without requiring fixation. The next section would explain their approach, and how adopting it would be beneficial for new kinds of works such as food presentations.

4. Doing away with tangible fixation

Most civil law countries meet the idea-expression dichotomy without the fixation requirement by giving literal meaning to the term ‘expression’. They understand that ‘expression’ means ‘to be perceivable’ and not necessarily to exist ‘in a material form’. Without the need to have fixation in a material form, the issue of transitory duration of work does not arise. Thus, courts have been liberal in recognizing copyright even over things such as perfume scents­­. Scents have been agreed to be sufficiently perceivable, even if for a brief period of time (before diluting in the surroundings). Thus, they are understood to be an expression and not a mere idea. The Dutch court which gave the above decision stated that most countries do not offer protection to visually and aurally conceivable works because the statute drafters never contemplated such demands could arise in future. It is believed that restricting the scope of copyright to materially fixed objects which are non-transitory in nature would prevent multiple works from protection such as sand sculptures, hairstyles or makeup styles.

In Roberts v. Chanel, the French Court opined that the purpose for fixation is merely to serve as evidence in an infringement suit and is not a precondition for copyright to exist. Copyright in a work starts existing the moment it is expressed in a perceivable form. Therefore, if a speech is made, the speaker will have the copyright over it. Even if later a third party writes this speech and publishes it for the first time, it would still amount to infringement of the speaker’s copyright.

Going by this approach, food plating could be considered an expression of a chef’s idea by virtue of being sufficiently perceivable. Even though it may perish eventually, the existence of the work till it was consumed, would not be ignored.

Copyright law is aimed at incentivising innovation and creativity and letting authors profit from such works. Presentation of gastronomic creations meet all requirements under Indian copyright law except fixation. India benefits from not having fixation as a statutory requirement for artistic works, but something that has developed through practice. A revised interpretation broadly on the lines of Civil law nations could be considered to meet modern requirements of upcoming industries.