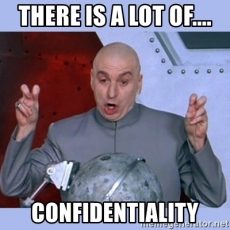 In this post on the recent Delhi High Court order in Interdigital v. Xiaomi, I highlight how the common practice of courts granting confidentiality in commercial litigation without much reasoning does not augur well for transparency, judicial accountability and the citizens’ right to be informed of Court processes and reasoning as part of the fundamental right to freedom of speech and expression under Article 19(1)(a) of the Constitution of India.

The Public’s Right to Know

The Delhi High Court’s order deals with InterDigital’s proposal of a Confidentiality Club for sharing confidential documents to assess whether the licensing terms being offered by InterDigital to Xiaomi were on FRAND (fair, reasonable and non-discriminatory) basis. The Delhi High Court rejected this proposal to restrict access to certain confidential information from the defendant’s representatives, and to make it subject external eyes only.

The judgement clarifies that it is only concerned with the issue of whether such a tiered Confidentiality Club arrangement can be imposed upon Xiaomi against its wishes. It answers this question in the negative but notes that the decision does not have a bearing on similar arrangements in case both parties agree to them as a result of some reciprocal understanding amongst themselves.

Therefore, though the judgment decries the denial of fair opportunity, to the defendants, to meet the case set up by the plaintiffs, it still does not offer pushback against confidentiality that affects the public’s right to know. However, as noted in a Report titled, ‘Open Courts in the Digital Age’ by the Vidhi Centre for Legal Policy, the answer to what constitutes confidential information is not always self-evident, especially when parties have not contracted or agreed amongst themselves on this question.

In the case of Ericsson v. Mercury Electronics, even claim charts were treated as confidential upon a request by the patentee without much reasoning by the Court to treat them so. The commercial reason for Ericsson’s request for confidentiality was most likely based on the impact of such disclosure on its other litigation—it was suing multiple companies for patent infringement as well as being investigated by the Competition Commission of India (CCI). Similarly, in the case of Ericsson v. Lava, Ericsson argued for confidentiality of its patent licensing agreements containing sensitive commercial information, which was again granted by the Court without much reasoning. Here too, Ericsson probably did not want to disclose its licensing rates as it was accused of abuse of its dominant position as a SEP owner.

Notably, this grant of confidentiality without reasoning, as long as both parties consent to it, ignores the public interest involved in accessing information regarding these disputes. As the Vidhi Report notes, “The logical extension of the courts agreeing to protect the confidentiality of these pleadings is that even the trials and arguments would have to take place behind closed doors.”  This impediment on dissemination of information regarding trials and arguments also hinders the assessment of judicial accountability.

This can potentially lead to a slippery slope wherein more litigants are motivated to seek and be granted confidentiality in commercial litigation. In the United States, despite both parties agreeing to confidentiality, it was noted pertinently that, “many litigants would like to keep confidential the salary they make, the injuries they suffered, or the price they agreed to pay under a contract.” However, the details must be disclosed to the public if they are “….vital to claims made in litigation.” (Baxter International Incorporated v. Abbott Laboratories, 297 F.3d 544) There, the Court insisted on document-by-document reasons and legal arguments in support of the propriety of secrecy instead of accepting the request for confidentiality on account of the license agreement being confidential by its very terms.

In the Indian context, as I briefly note in part 1, Section 153B of the Civil Procedure Code (CPC) notes that any Civil Court should be considered open to the public as a general rule in all civil cases, subject to the judge’s discretion in certain cases. However, Section 129 of the CPC provides that all High Courts are entitled to make rules to regulate their own procedure in the exercise of their original civil jurisdiction. The non obstante clause at the beginning of Section 129 indicates that Original Side Rules, framed by the High Court in exercise of the power conferred by Section 129 would prevail, irrespective of anything to the contrary in the CPC. However, open courts have now become an issue of constitutional concern with the Supreme Court’s pronouncement in the case of Swapnil Tripathi v. Supreme Court of India. According to this judgment, ‘open courts’ should be considered as an extension of Article 19(1)(a) of the Constitution of India, since they are instrumental to materialise the citizens’ right to be informed of the workings of different institutions of the state, subject to certain restrictions such as the fundamental right to privacy, etc. Thus, in addition to consent of both parties (as required by the case at hand), Courts should ideally also insist on convincing reasons to grant requests for confidentiality of information before excluding these documents, and resultantly, the arguments relying upon them, from public scrutiny.

Once perceived via a constitutional lens, we would perhaps require a narrowly tailored test for determining confidentiality of information where the public is precluded from exercising their fundamental right to access the court proceedings and documents relied upon by the parties.

Recently, in Anuradha Bhasin vs Union of India (2020) 3 SCC 637, the Supreme Court noted that as per the proportionality standard, any restriction on fundamental rights of individuals must be pursuant to and necessary for a legitimate aim and must constitute only the least restrictive measure in the absence of any alternative to achieve that aim. The Court observed that Article 19 mandates the right to information as an important facet of the right to freedom of speech and expression in a democracy sworn to transparency and accountability. (para 23.1) The richer articulation of the right to information of the public in Anuradha Bhasin arguably heightens the quality of justification required for its restriction. That said, any test would also have to delicately balance competing legitimate interests of private parties in this information. Applying this test may not be as straightforward as it was in Anuradha Bhasin where only the state was interested in concealing the information concerned.

Finally, judges need to be more proactive and alert to the public interest in these seemingly ‘private’ disputes. This is because, as Rajiv notes here, these disputes entail more than just the rights of the private parties involved since a patent monopoly, as an exception to a competitive market, must necessarily be justified by efficiency concerns rooted in public interest. Similarly, Justice (Retd.) Prabha Sridevan has noted pertinently in the case of IP disputes that judges must adopt a more proactive and inquisitorial role in adjudicating these disputes, which often involve big names and corporations. She observes that remaining alert to the Constitution is crucial since public interest is not just an also ran but the justification in which the reward of the IP holder is rooted, and hence it precedes such reward.