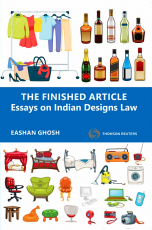 I am delighted to take this opportunity to share with the SpicyIP community the release of my book, The Finished Article: Essays on Indian Designs Law (Thomson Reuters, 2022, ISBN-13: 978-9393702173).

The Finished Article intends to offer readers a guided tour through the 100+ year modern history of designs case law in India. The book details a handful of key practice areas in designs law, with a keen eye throughout on its overlap with other disciplines in wider intellectual property.

The text of The Finished Article is arranged into six chapters following an introduction.

In the Introduction, I make a few short points necessary to appreciate the subject matter in context. In the main, I endeavour to clear up some common misconceptions about Indian designs law. One stems from the perceptible gap between the ordinary and legal meanings of the word ‘design’. Another comes from the false but persistent belief that design right violations can be prosecuted criminally. Both have historically been the site of some confusion. I also set the table for the rest of the text by summarising the origins of designs law in India.

Chapter 1, More Than Fifty Times, dives into substantive designs law and some prominent sites of its overlap with copyright law. The centrepiece of this overlap is Section 15(2) of the Copyright Act, 1957, a unique provision which saves copyright in a design up until fifty iterations of that design. I make an effort here to strongly distinguish between what I call pure copyright and design copyright. Through this lens, I focus on three key issues: first, how India’s copyright and designs statutes deal with this overlap; second, how Indian courts have responded to subject matter that could potentially be protected under both designs and copyright, and third, how Section 15(2) operates in practice.

Chapter 2, In Any Other Country, takes up the subject of prior publication in designs law. Here, I cover how Indian law on the subject was historically restricted to designs published in India and, as such, case law tended to focus on simple, linear questions. The enactment of the Designs Act, 2000 saw this law change overnight to recognise prior publications from anywhere in the world. I describe how this has drastically expanded the scope and importance of prior publications. Its upshot has been a shift in the conversation towards granular issues as to the sufficiency, relatability, and overall effect of prior publications. Each of these issues, in turn, can make or break the validity of design registrations as well as determine the fate of design infringement actions. These modern issues, I establish, now slot into a wide-ranging, dynamic, and aggressively global inquiry.

Chapter 3, New Or Original, discusses novelty and originality under Indian designs law. Owing to the paucity of domestic precedent, this is a subject on which Indian courts, until a few decades ago, relied heavily on English law. This reliance birthed a fastidious set of demands for recognising designs as new or original. Either side of the Designs Act, 2000, Indian courts have keyed in on the Statement of Novelty in a design application and the presence of trade variants as important markers on which to judge novelty and originality. The lines of legal inquiry to be looked into are two: whether the design is new or original in absolute terms, and whether the design applies something known in a new or original manner. I show that recent case law is framed steeply against Applicants, and that designs seeking to qualify as new or original are held to formidable substantive standards.

Chapter 4, Cancelled, examines the interface between cancellation and infringement under Indian designs law. In it, I spell out how, for several years, this field was dominated by a single issue: whether cancellation-style grounds could be raised by Defendants in infringement proceedings. The Designs Act, 2000 not only resolved this issue in favour of Defendants but also executed a clean conceptual separation between cancellation and infringement. Principally, this has been done via a statutory transfer system to direct traffic between the Controller, courts of first instance, and High Courts. However, the new architecture has ushered in controversies of its own, specifically on the circumstances of statutory transfers and the role of High Courts. Several High Courts, as well as the Supreme Court, have all had their say on the subject. I find that, though the revised statute brings clarity and consistency, it has not come at the cost of diversity of judicial opinion.

Chapter 5, Not Every Resemblance, studies Indian cases on perhaps the most meaningful question in designs law: what constitutes design infringement? This question, as I consider, is really three inquiries in one. First, it asks how similarity between two rival designs should be judged. Second, it questions how much similarity ought to be enough to prevent two designs from co-existing in the same market. Finally, there is the question of how factual and legal considerations should be balanced in this process of adjudication. Here, I show how, despite precedent that points to rigorously following these inquiries, several Indian courts have demonstrated steadily dwindling enthusiasm for this rigour of late. Design infringement cases have drawn from a succession of experimental approaches with little to connect them. As a result, the modern design infringement inquiry in India presents two judicial paths: Indian courts may adopt a cursory approach to infringement or they may stand by a more robust, substantive inquiry. These dueling approaches, I make clear, agree on what constitutes design infringement. However, they notably diverge on how much judicial effort ought to be expended to determine design infringement.

Finally, in Chapter 6, The Cases That Changed Everything, I consider three questions. First, can a registered design proprietor sue another for infringement? Second, can a design infringement suit be combined with a passing off claim? Third, is there a passing off component to the violation of design rights themselves, separate from infringement? In this chapter, I detail three prominent Full Bench decisions of the Delhi High Court that have sought to answer these questions in the last decade. The answers that have emerged are thoughtful, nuanced, and not free from controversy.

Personally, The Finished Article has been the culmination of a demanding 13-month project. One reason for its demanding nature is the quality and complexity of the material I have had the privilege of working with. Several cases considered in this book are fabulously layered and deeply impressive pieces of legal writing. Doing justice to these decisions, purely in terms of communicating the ideas involved, has been a big challenge. Presenting them for the benefit of others, in terms of how and why the cases came to rule the way they did, has been a bigger challenge still.

The book is available for order online on Amazon.

I am happy to take questions about the book, and welcome comments and feedback. Please feel free to reach out to me in the replies below!

Note for readers: SpicyIP is a participant in the Amazon Associates Program, an affiliate advertising program designed to provide a means for sites to earn advertising fees by advertising and linking to amazon.in.