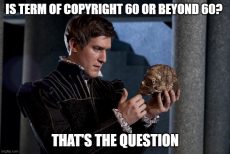 We are pleased to present this piece by Mr. Rajesh Kumar and Ms. Akanksha Badika on the unresolved issues surrounding the term of the copyright in sound recording/cinematograph film and underlying work(s) under the Copyright Act, 1956. Rajesh Kumar works as the Head of Legal and Akanksha Badika works as the Legal Executive at Bhansali Productions, Mumbai (a film production house). Their practice predominantly revolves around copyright law, litigation and advising on all matters related to films that are emanating from script to screen. Disclaimer: Though the authors principally deal with copyright and music related matters, the thoughts and opinions expressed in this Article are personal.

OLD IS NO LONGER GOLD: Do Copyright in Films/Songs Expire with the 60 Year Limit?

Movies like Andaz (released in 1949), Albela (released in 1951), Anmol Ghadi (released in 1946) and songs like- “Pyar Hua Ikrar Hua Hai” (released in 1956) or “Haal Kaisa Hai Janab Ka” (released in 1958) are more than 60 years old, but can now they be used without any authorization from the producers? For instance, can the song “Leke Pehla Pehla Pyar” sung by the renowned Mohd. Rafi, Shamshad Begum and Asha Bhosle composed by O.P. Nayyar and written by Majrooh Sultanpuri freely be used now, given that the copyright period for the song has expired?

Before delving into such questions, lets understand the statutory background.

Copyrights in a cinematograph film expire 60 years after their publication, meaning thereby that they can be utilized freely without any authorization/permission. Further, as per Section 52(1)(y) of the Act “the exhibition of a film after the expiry of the term of its copyrights does not constitute an infringement”. It is well established as per the statute under S. 26 and S. 27 of the Copyrights Act, that copyrights subsist in case of a cinematograph film and sound recording until 60 years from the date of its publication. It has been a well carved out thought of the drafters of Copyrights Act that the 60-year term is to prevent perpetual monopoly over any copyrighted work.

An interesting question here, is whether expiration of cinematograph film or sound recording also results in the expiry of copyright in the underlying works that are embodied in this cinematographic works/sound recordings? Or would this be governed separately?

Beginning of the Controversy

There exists a conflict between S. 22, which states that the duration of copyrights in a literary or musical work is for the entire life of the author and 60 years thereafter, and S. 26 and S. 27, wherein the duration of copyrights in a cinematograph film/sound recording is 60 years from the date of publication. Given these seemingly conflicting provisions, which of the two terms will prevail?

Let’s understand this briefly-The film industry began producing films aggressively only in the late 1950s-60s, meaning thereby, it is now when the copyright term of many of these songs have started expiring. Pertinently, the fact and the controversy herein remains res-integra till date.

There have been some court judgements which have dealt with copyright in the sound recording and the underlying works embedded therein. In 1977, there was the historical judgement of IPRS v. Eastern Motion Pictures Ltd., wherein the Supreme Court held that it is the producer who is the first owner of underlying works in a cinematograph film. Reaffirming the same, the Hon’ble Delhi High Court in IPRS v. Aditya Pandey (2012), has held that sound recording is an integrated whole in which are interwoven varied individual underlying works like the lyrics and music. The communication to the public of the sound recording does not infringe the copyright in underlying works after the expiry of the term of the sound recording. Thereafter, comes the most contentious order of the Hon’ble Delhi High Court wherein in IPRS v. ENIL, PPL v. CRI (2021), the court reaffirming the Aditya Pandey (Supra) judgement, stated that question of infringement of underlying works by performing/communicating to the public a cinematograph film would not arise and as such exhibition of a film after expiry of the copyrights term is not an infringement of underlying works embedded therein. Though the matter is pending before the Division bench, this observation of the Single Judge remains noteworthy.

To understand this further, an author of an underlying work with an intention of merging their contribution as an interdependent and inseparable whole, cannot at a later stage when their contribution is integrated with the other constituent parts thereof, state that their works exists independent and separable. It can be argued that as per section 13(4), there exist separate copyright for the underlying works which are incorporated in a cinematograph film. However, one must also note that existence of parallel rights does not mean existence of parallel licenses, meaning that there would be no need for separate authorization(s). Furthermore, we can rely on the theory of merger as explicitly expressed in the IPRS v. ENIL (supra) matter “a sound recording is a collaboration of author of literary work, author of musical works and the author of a sound recording who ultimately directs the merger of musical work and the sound recording to form one complete whole.” Applying the theory of merger, the question of infringement of such literary and musical works would not arise after the expiry of term in sound recording and therefore, the film/sound recording can be used without any permission/authorization.

The statute in itself is plain and clear that after 60 years from date of publication, the cinematograph film/sound recording does not enjoy copyright protection and comes into the public domain. The literary rule of interpretation is a well-established rule for construing statutes, stating that primarily, plain and ordinary meaning must be accorded to the provisions of law. An interpretation which is contrary to intent of S. 26, 27 and S. 52(1)(y), is not only unlawful but also misconstrued and misconceived in law. There exists no room for interpretation/construction since the law remains unambiguous. Even if the intention of the legislature is gauged, then it can be unequivocally construed that such intention has been abundantly made clear by insertion of these sections. Moreover, it is a well-established facet of interpretation of statutes that first and foremost, the literary rule of construction is to be followed and no departure from the same is allowed. (Verbis legis non est recelendum).

Moreover, considering the conflict between S. 22 and S. 26 and 27, the rule of harmonious construction needs to be applied. The interpretation needs to be in such a manner so as to give effect to both the provisions by maintaining harmony between the two. The basic premise under such a rule of construction is that if the legislature has intended to give something by one hand, it would not intend to take it from the other hand as both the provisions have been framed by the legislature and carry equal force of law. If such is the rule then, one may argue that if the legislature has given S. 22 by one hand, it cannot take away S. 26 and S. 27 from the other hand. No provision of law is superior or inferior as they command equal force.

Copyright in the underlying work by virtue of being embedded within a cinematograph film or sound recording would still subsist yet not get infringed. That said, if any of such underlying literary work (script, dialogues, lyrics), musical work, dramatic work, etc. is utilized independent of the film/ Sound recording as the case maybe, then an infringement claim shall arise. Considering the scheme of the Copyright act, this harmonious interpretation was the legislative intent underpinning the grant of a separate copyright to a cinematograph film and a sound recording. An interpretation contrary to this would render S. 26 and S. 27 nugatory implying that S.22 is superior to S. 26 and S. 27, which could never have been the legislative intent as a cinematograph film and a sound recording being an independent work is in no way inferior to the rights of authors in underlying works. Hence, when copyright in a Cinematograph film or a sound recording expires, all the rights under S. 14 (d) and (e) also extinguish, it can be inferred that the song “Leke Pehla Pehla Pyar” can be utilized as is without any consent/authorization.

It will be interesting to watch how the matter of IPRS v. ENIL (2021) would unfold in the Division bench after 44 years of the historical judgement handed down in the matter of IPRS v. Eastern Motion Pictures Association in 1977. Considering the legislative intent behind S. 26 and S. 27 of the Copyright Act, it becomes clear that the concept of seeking permission for a cinematograph film or a sound recording would end with the end of the copyright term in such cinematograph film or sound recording, however, an important aspect of royalties cannot be ignored, that during the term of the sound recording, there are two types of royalties which are payable -one on account of utilization of sound recording, and one on account of utilization of the underlying works. On the other hand, upon the expiration of the sound recording, only one set of royalty shall be payable, which is to the author of underlying works embedded in the sound recording.